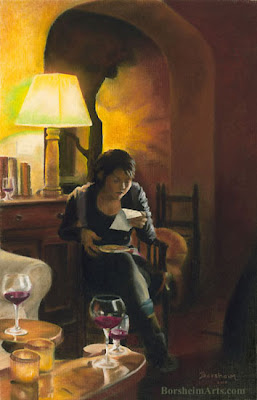 While I seem to be running “a day late and a dollar short” these days, perhaps because stubbornly, I want to use my daylight hours for art creating… I did want to jump in on offering shopping specials during this weekend of Black Friday and Cyber Monday.

So, now through this Cyber Monday (29 November) at midnight (well, ok before I wake up in Texas on Tuesday morning), I am offering all of my blog readers

20% off of all available giclée

Giclée (pronounced 'zhee-clay') is a French term used to describe a high-quality reproduction of 2-d art using inks that will last at least 200 years, given reasonable care of your art (ie… little direct sun).

While I do encourage collecting original art, I am fully aware that not everyone can do that. I am very impressed with the quality of my giclée and would love to see people have things around them that move them.

Lately, I have been creating pastels and charcoal paintings/drawings on paper. I have had hi-resolutions scans done of all of these, such as ”The Letter” that you see here. Please note that for an original that is on paper, the giclée will be on paper. Painting reproductions are on canvas. Also, if the proportion is not matched with the original, then please tell me the longest dimension that you want. For example, “The Letter” is a long and narrower drawing compared to a standard 24” x 18” image proportion. So, if you ordered a 24” giclée, the width might be around 15”.

Also, included in this sale are giclée on canvas of some of my images from Italy that are part of my fund-raising efforts to help my kid Rudy get a set of dentures (implants are apparently way too expensive). He has had about four years now without ANY teeth because of a rule in Medicare that says “teeth are cosmetic and therefore not provided.”
Rudy was born with Treacher Collin’s Syndrome and I think he has struggled enough! For more information on this project, click here:
http://www.borsheimarts.com/treachercollins.htm

Details on the Art Sale:
All you have to do to receive your 20% savings, is to visit my Web site and then my contact page. Tell me the title of the artwork you would like to buy and also the size of the giclée. I will send you a PayPal invoice so that you may safely use your credit card online, or you may send me a check, your choice.

I will try to have all images shipped to you before Christmas, but if it is just not possible, I will create a “gift card” to give your loved one on the right date that includes an anticipated arrival date for the artwork.

Posted by Kelly Borsheim Artist at 8:53 PM No comments:

Today was a glorious day! 84 degrees, partly sunny, a wee bit windy . . . my favorite kind of stone carving day! I like to stop work each day in my studio – whether indoor or out – leaving something unfinished. I have found that it is a way to stave off a creative block. Monday I left myself with the start of an idea, but not a full answer.

Today, I began to focus on the top portion of my marble sculpture. Those who either read this blog often or have taken a class from me might remember that I often feel that the most helpful information about the form will often be found by the view one is least likely to have, that is, the bird’s eye view. 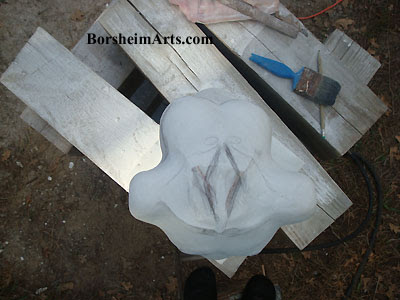 Thus, I began today’s work by getting out my trusty stepladder and having a look. I decided to pull back the woman’s rib cage, emphasizing even more the arching gesture while pulling her into the male’s form a bit. Then I figured out how the lines I drew Monday on the stone might work and connect up with one another on an artwork in the round.

I love triangles, but I did not really love this idea. However, I did not have another at the moment. When this happens to me, I try to determine whether or not I can cut into the stone to explore the current idea without losing something that I later will want. For me, this is the challenge of direct carving. For collaboration with the stone to occur, sometimes I must remove material so that an idea emerges. 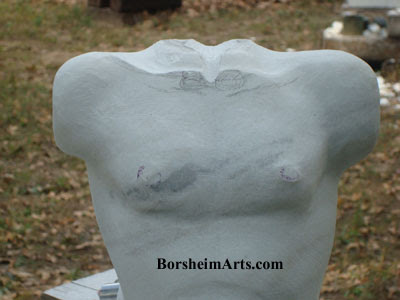 After I chiseled out the diamond in the neck, I stepped back to take a look. (See the second image.) I felt nothing. Well, not really, I actually decided that any upward hint of a neck actually detracted from the lines I have carved in the marble torsos. However, I still loved the “S” curve of the clavicle (collarbone). So, I decided to emphasize that line.

As I was chiseling away, my mind drifted to my friend and mentor Vasily (Fedorouk)’s work. Over the years that I have known him and studied his work, I began to notice that certain shapes or poses seem to reoccur in his sculpture. Like Leonardo da Vinci’s solo finger pointing up, I guess all artists have some gesture or line that has some personal meaning, however subliminal.

And then it occurred to me . . . I had carved this shape before on another torso in marble back in 2004! This particular "S" curve of the clavicle reminds me of an open book. And an open book could be interpreted as a type of vulnerability or perhaps accessibility. It is also a form of generosity. I will let the psychologists take it from there. 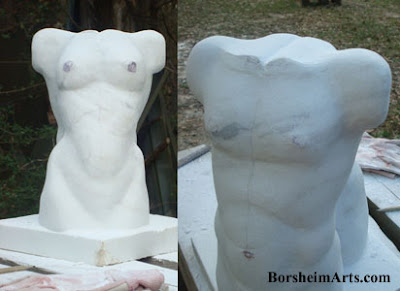 It felt great getting this resolved today, for I still am unsure of what I want to do with the base . . . There is a cold front expected tonight, so I stopped work long enough to get all the plants indoors and bring up some firewood to the house. The sun had set by the time I returned to the marble.

Of course I could see her whiteness in the dying light and I needed nothing more. I am close enough to the final shape that I use my fingers more than my eyes to feel and refine the form. I love running my fingers along the weaving landscape of muscles and my sense of touch gives me much more information now. I used the rough end of my carbide file to remove the tool marks of the day until it was almost pitch black outside. A good day’s work, to be sure.

Gratitude is best when expressed. So in the spirit of the American Thanksgiving, I just wanted to say thank you for your interest in my journey. I could not do it without you.

Posted by Kelly Borsheim Artist at 6:11 AM No comments:

Generally after I hang a big exhibit, I find my energy zapped and need a day or more to recoup a bit before beginning to make art again. That pattern held true for my current exhibit at The Vineyard at Florence, which will be up at least until mid-January 2011. I had been working very hard to create lots of new works for this and other events since I returned to Texas. I really need to continue to do this – at least until I have my last event of the year on 12 December at The Curioseum in the Community Renaissance Market in Austin, Texas.

However, some days I just cannot make myself do what I should. Yesterday was one such spontaneous day. It was slightly cloudy, but warm – one of my absolute favorite kind of carving day. So, tools in hand, I worked on my marble carving of two torsos titled “Back to Back.”

I enjoyed my day outside and have been loving refining the forms each day that I have been able to go out, even if for only an hour or two. Sometimes I like it that stone carving takes so long. For a while now, I have been trying to find some clever answer for how to finish the tops of the torsos. Here you see some clarified sketches for an idea I started visualizing last March. 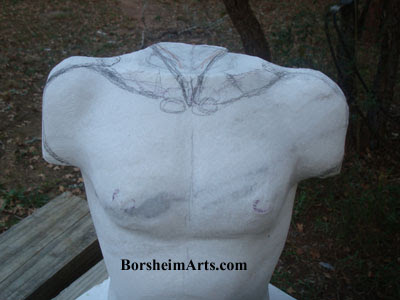 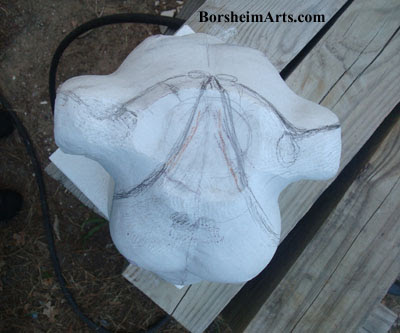 Supporting the Arts during the Holidays

Whether you want to brave America’s “Black Friday” this week with the crowds at the shops, or stay home, if you shop at all with Amazon.com, you can also help support this blog without spending one cent more than you normally would!
Borsheim Arts Studio is an affiliate of Amazon's. Just visit ANY page on my blog and look along, down the right hand column until you see the search box for Amazon.com.

Then just type in any title or item you want to find on Amazon while on my blog page and start shopping. You will be taken to Amazon’s site, but they know you started with my site. Amazon will send a little something my way for most sold items and it will not cost you a cent extra! This is an easy way to support, for example, my art blog writing and photography efforts.
Thank you and happy shopping!
http://artbyborsheim.blogspot.com


Posted by Kelly Borsheim Artist at 4:30 AM No comments: