Continuing my report of the small town of Caprese Michelangelo
in the province of Arezzo, I wanted to share with you a few more of the sculptures on exhibit in the Museo Michelangiolesco.

This first one just caught me off guard and made me laugh. This museum celebrates the birth of Michelangelo. His works strike me as dark and serious most of the time, and this bronze titled “Il Pollo Innamorato” (“The Chicken In Love”) by Giulio Galgani in the year 2000 is hardly that. I thought it was an idea well depicted. 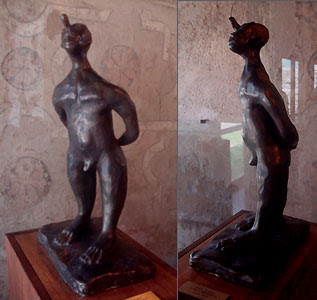 This next sculpture in wood, “Scultura Multiforme” by Mauro di Scovola, was a bit confusing for me and I am not sure even now what I think of it. I can see obviously at least one female torso, but there are so many elements of Escher-like qualities and other symbols, perhaps, that I had a difficult time relating to this work. Basically, regardless of how curious I felt, the overall effect for me was not beautiful and for this, I think it has failed (for me). And yet, I included it here, so . . . 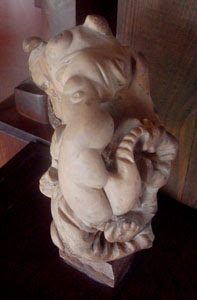 Another room exhibited the following sculpture and struck me as a moment that I had not previously seen sculpted. Decimo Passani, a Florence-based sculptor created this colored plaster piece titled ”Bambino che cade dalla sedia” (“The baby (boy) that fell from his chair”). I like the energy, the texture, and the naturalness of this artwork in sculpture. Not kitsch at all. 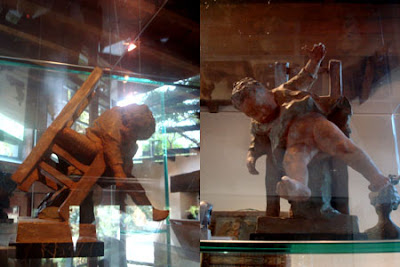 Although there are many more works of sculpture and even a few drawings on exhibit in the museum (some more of which I will be sharing with you tomorrow), my main complaint is that the exhibit is set up in such a way as to make viewing the art really difficult. I understand the need to protect the art from theft and dust, but the plastic enclosures were full of glare and frankly, horrible. It was lovely to be able to see outside into the surrounding green areas, but I wonder if it would have been better to place some light curtains over the openings and install lights overhead. They could be placed in positions to minimize reflection on the Plexiglas. My images are horrible largely due to the fact that I could not find a good viewing position.

Still, the museum is worth a visit in a charming location in central Italy. When I was there, the Michelangiolesco Museum and its lovely grounds on the hilltop were open Monday through Friday 10:30 am to 6:30 p.m.; Saturday, Sunday, and holidays from 10 am to 7 p.m. Tickets are four euros each, with discounts for groups and children.

Posted by Kelly Borsheim Artist at 11:55 AM 2 comments:

In my last post, I spoke about my visit to the birthplace of Michelangelo Buonarroti.

In this post, I wanted to share with you some of the scenery of the museum in the small town of Caprese Michelangelo, north and east of Arezzo, Italy. Inside the buildings are copies of many of the great works of Michelangelo, but there are a lot of other artworks on exhibit as well.

I love the omaggio to classical storytelling in art in this bronze sculpture and bas relief combination that you see in the first image. The young Michelangelo rests in a twisted pose (cleverly predicting his dynamic figure poses that changed the art world) as he gazes up into his future. Although my image does not show it well, each of the boy’s future sculptures is envisioned in varying levels of dimensionality, moving from high relief close to the young artist, to extremely low relief (upper left). 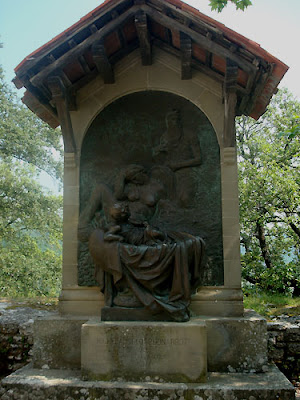 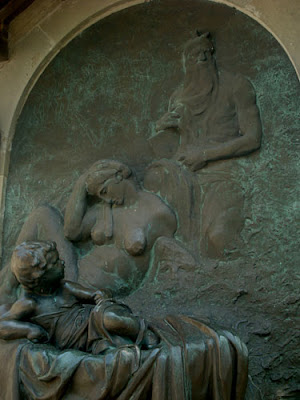 Unfortunately, I could not find the artist’s names on several of these outdoor pieces, although they are assuredly more contemporary works. I think what I am trying to show here also is that just because you have seen the original works of Michelangelo, do not think that this museum is only full of copies of the great artist. It is worth a trip and quite a beautiful area. 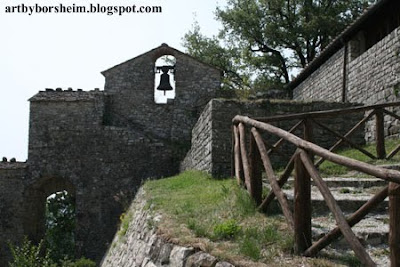 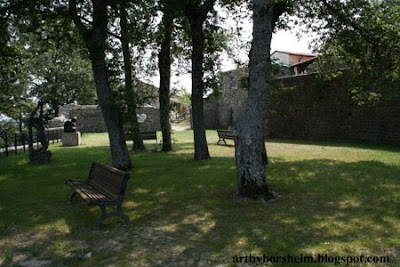 And I can highly recommend the food at the nearby Pensione e Ristorante Buca di Michelangelo. And if you find yourself there during the week, please stop into La Pecora Nera [The Black Sheep] shop and say hello to Simona and perhaps even her husband Andrea. 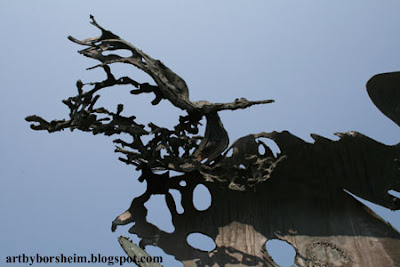 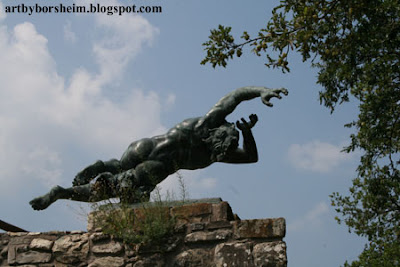 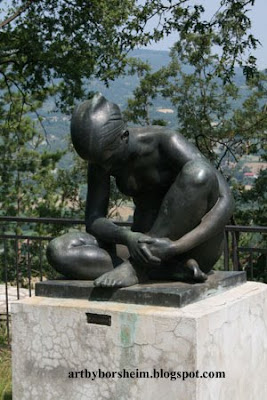 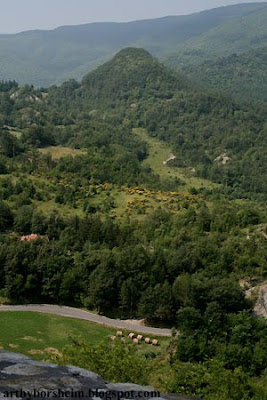 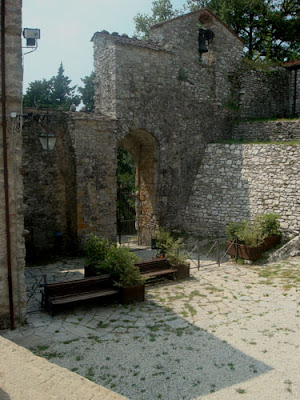 Recently I returned to the birthplace of Michelangelo Buonarroti for a party that one of my collectors held in their home there. The morning after the party, I revisited the renovated Museo Michelangiolesco that celebrates the life and work of the famous artist and architect.

One of my first and most important teachers, Michelangelo was probably born in the Palazzo del Podestà, the home of his parents Lodovico di Leonardo di Buonarroti di Simoni and Francesca di Neri del Miniato di Siena. At the time of his birth (6 March 1475), babies were born at home and not in a hospital.

Podestà is the title for a delegate from the Florentine government who worked this area. Michelangelo’s father held this political post for six months during this time. Palazzo is the Italian word for “palace” but this stone house looks quite simple by today’s standards. I included a detail shot of the stairs leading to the upper floor where the living quarters were, but you may see a better image of the (left) building on the museum’s site. 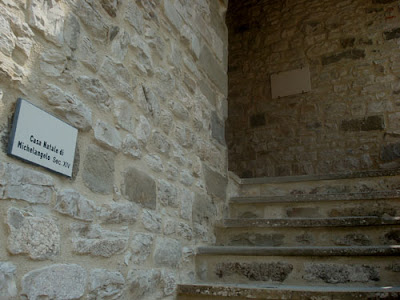 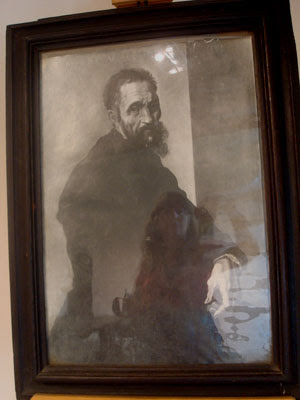 Some of the furniture in the home is contemporary with Michelangelo’s time, but are not original to this space. Other furniture, such as the bed, is a reproduction in a Renaissance style from the 1900s. Also in the home are reproductions of works of art in which Michelangelo was a subject, including my two favorites: monochromatic sketches by Francescho Furini titled “Michelangelo sul letto di Morte / Michelangelo on his death bed” 1627-28 and “La Madre di Michelangelo incinta cade da cavallo / The pregnant mother of Michelangelo falls from her horse” created in 1628.

The name “Michelangelo” was added to “Caprese” in 1911 and this charming little town is north and east of Arezzo. When I was there, the Michelangiolesco Museum and its lovely grounds on the hilltop were open Monday through Friday 10:30 am to 6:30 p.m.; Saturday, Sunday, and holidays from 10 am to 7 p.m. Tickets are four euros each, with discounts for groups and children.

P.S. I hope that you enjoy my little self-portrait with Michelangelo! Ha. 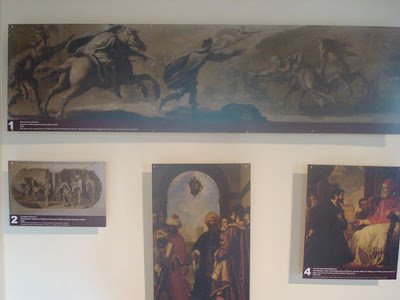 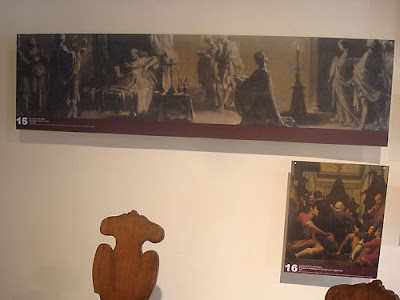 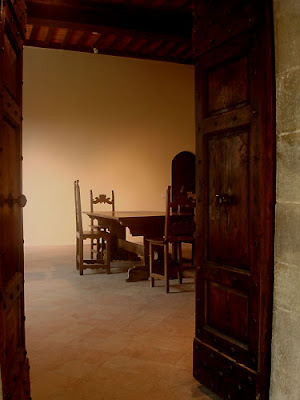 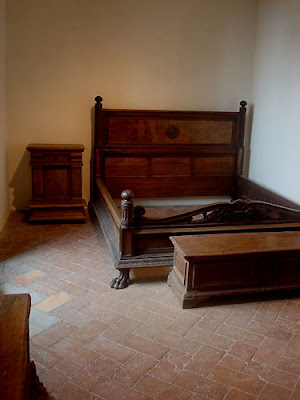 Posted by Kelly Borsheim Artist at 10:05 PM No comments:

I recently tried to fly to Madrid on EasyJet Airline to meet my brother Paul for a few days before returning to America. However, after taking the train to Milano, Italia, from Firenze, and then the bus from the train stazione to the Malpensa airport, I learned that the flight had been canceled shortly before I arrived.

The man behind the counter told me that it was a staffing problem and that it was not uncommon to have the later flights canceled because early flights had been delayed. The delays meant that the crew would not work after a certain point, I guess. This was especially true on a Saturday night. A Spanish traveler told me that he discovered that there was currently a strike by air-traffic controllers in Spain after the government cut their pay by 80%. That changed all the dynamics for my trip.

EasyJet arranged for all of us now-stranded clients to stay in a hotel with a simple dinner and a nice breakfast buffet. I was told to find an Internet connection at the hotel and decide whether I wanted to reschedule or get a refund. Some of my fellow travelers were re-booked to Spain – the following Tuesday (tomorrow). After a long night of researching my options, I decided to head back to home (Firenze) and try another day.

Unfortunately, I ended up needing to wait over five hours in the train station in Milano. The day was hot, as was my tolerance for spending more money than I had already wasted on travel to and from the airport, which I knew would never be reimbursed. Milano Centrale is actually one of the more attractive train stations that I have seen and I was happy that I had packed a small set of pastels and paper in my small suitcase.

So, instead of exploring Milano, I decided to stay put and just wait. After a nap on a marble bench, I took out my drawing supplies and began a couple of sketches. There was an interesting clock on opposing walls with bas-relief sculptures of the zodiac signs. I have been fascinated with fantastical creatures all of my life and began to draw one whose shape appealed to me.

Here is the view from where I sat. The relief of Capricorn is in the center of the image, just to the right of the light posts. Sure, it was far off, but I was not worried about making a masterpiece, I just wanted to amuse myself and maybe learn something. 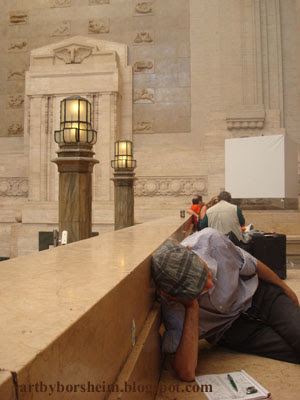 Always there are men lurking around the stations, waiting to chat you up. One of them began speaking to me cautiously and then more boldly. His name was Mohamed and he was from Egypt. Like always, these guys always start with the small talk – where are you from, where do you live now, what is your name, when is your train and which one? I only answer what I feel like at that moment, and as vaguely as possible.

During the course of my sketching, a policeman approached and gave me compliments on my drawing. I was not sure if he was just personally curious about what I was doing, or if he wondered if I was OK with Mohamed hanging around. If the latter, he never mentioned it.

Mohamed eventually picked up a brown pastel and then I offered him some paper. At first he was shy, but I insisted that he try it. Then I asked for his permission to take and post the photo that you see here. Afterwards, he asked if he could take my foto. 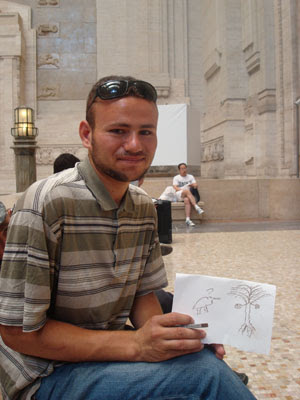 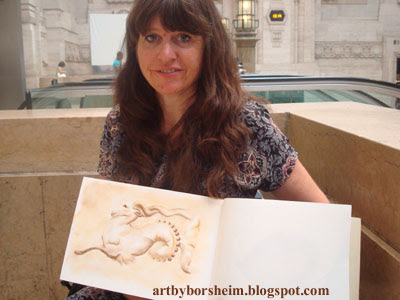 At some point later on, Mohamed got bored and said his goodbyes. He was quite polite. I finished up my little sepia sketch before starting another. And then it was time to board the train again. 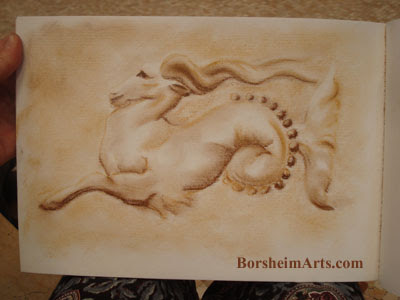