Not much time today for writing, but if you can stand to see ONE more church, here goes . . .
This one is near the cemetery and mountain homes I have been writing about recently in Salzburg, Austria. This church is quite ornate. As I walked past the outer courtyard, I saw this skull with bat wings. What a way to enter a sacred place that is suppose to uplift one’s spirits! 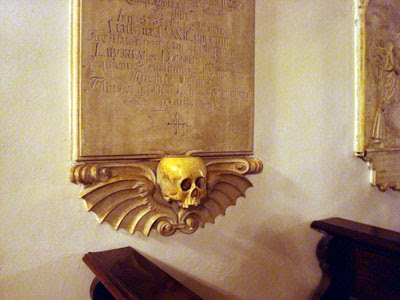 On the other side of the entrance was a round stone hung on a wall (shown here). If anyone has any idea of what this is for, please enlighten me. I doubt it is a bed warmer! 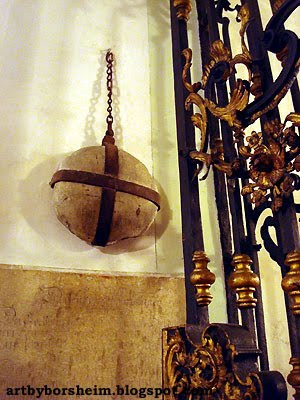 The other two image show you how decorated this church is. I believe this is considered Baroque (or maybe Gothic – eheh), but I am not that familiar with the art history labels. Yeah, yeah, I know that I should be, but I rather like thinking of shapes and composition more than categorizing things.

Is that a justification for bad artist behaviour? 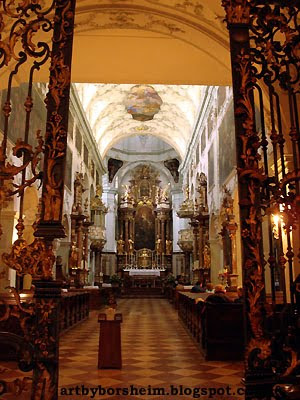 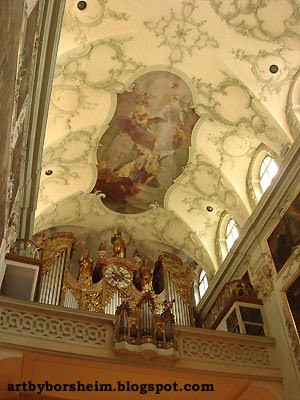 Posted by Kelly Borsheim Artist at 7:20 AM No comments:

As my friend and hostess Sylvia and I cruised around Salzburg, we ended up in a large cluster of buildings, churches and the like, with the tombstones that were covered with the colorful live plants. I was beginning to wonder if all of Austria treated their dead in this way, never forgetting. I think the church was St. Peter’s. I know I am a terrible tour guide because I was content to look and not think of labels (names, locations, etc.). It was overcast that day, raining a bit. Sylvia was not happy with the large amount of unusual rain they had there during my visit, but I rather enjoyed it and felt like laughing a lot when we got caught in it. 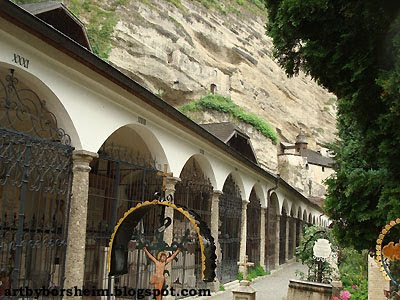 Along the cliffside in this cemetery, one could view some mausoleums, presumably used by the wealthier families in Salzburg. And then above those one can make out windows embedded in the cliffs. Sylvia told me that these spaces were used to protect people during the war. I did not think there looked like there was much space in which to hide many people, but then I did not go up inside. 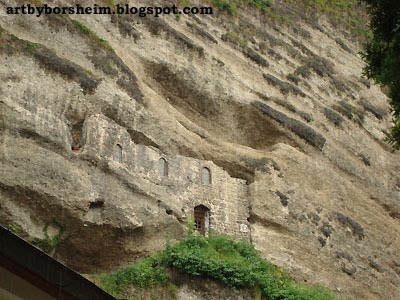 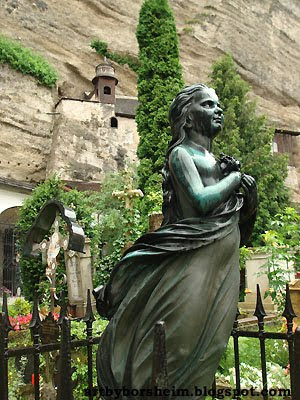 I remember that in the Carrara area of Italy, I was told similar stories about the mountains hiding locals from foreign attack. In fact, Lardo di Colonnata is a specialty dish of this Tuscan region, served even today. It is a “food” that is basically pig fat with pepper. It was all that people had to eat when they retreated up into the mountains to escape capture during wars. And it kept them alive. Perhaps that is why they cherish this dish so, but I have never had the desire to eat it. 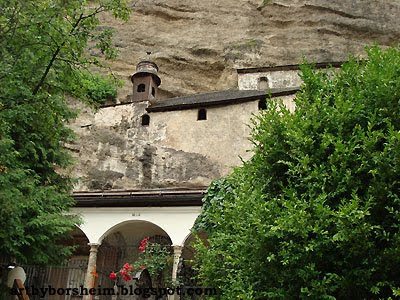 Posted by Kelly Borsheim Artist at 1:05 AM 2 comments: 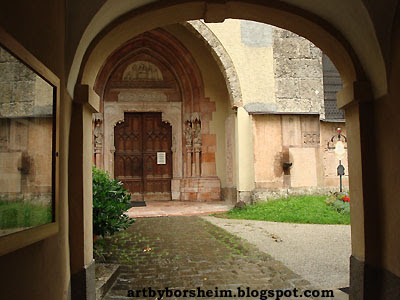 The archway looked inviting and my friend Sylvia and I walked past the courtyard filled with flowered grave sites to see if the church was open. It was. We entered through these elegant wood doors with metal accent hardware. A nun quietly glided by in front of us and Sylvia whispered to me after the woman left that this was the first time she had actually seen a nun here. 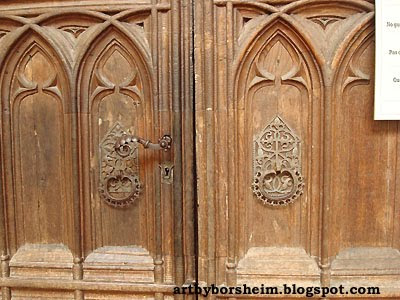 This next image shows the main altar of the church on the ground floor, as well as a detail shot of the beams on the ceiling. These geometric shapes are more involved that those ceilings I saw in Italy, perhaps because there is no artwork overhead. Or is that a “chicken and egg” question? 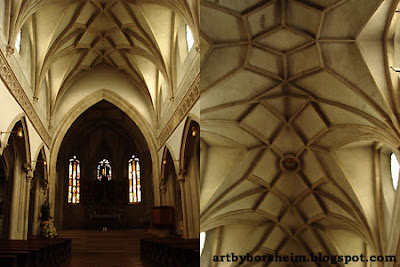 To the right of the main altar was an iron lace gate leading downstairs to another altar directly underneath the main one. I believe it was also a holding place for a saint’s relic or perhaps his tomb. I am not sure why I did not approach it closer to find out for sure. Perhaps because I was not alone. This space had an “Edgar Allan Poe” feel that I found intriguing. Hard to believe, but this dark space was even more quiet than the rest of the church. I relished the peace for a moment . . . 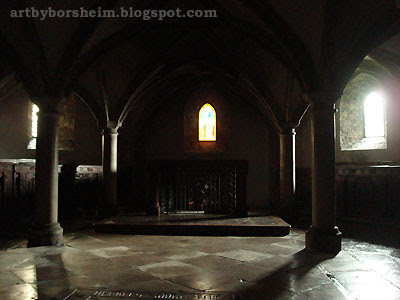 This next image I took as I walked back up the stair and looked towards the back of the church. Organ pipes were on a balcony overhead, but in the back . . . that dark space shows a bit of Austrian history. Some ancient paintings were discovered but to protect them from light, one had to pay a machine 50 cents to light the space for a short time. I was able to snap off a few images of these sacred wall paintings through the glass before Sylvia and I again stood in the darkness. 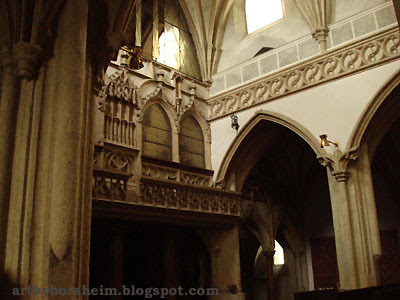 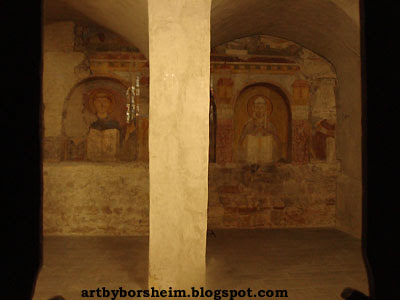 And finally, I wanted to show you some of the iron lace work in this beautiful gate that segregated another altar to the right side of the main one. The simple shapes, the soothing colors, and the touch of loving care in the patterned lace altarcloth that I suspect is handmade seemed the perfect setting for quiet contemplation. 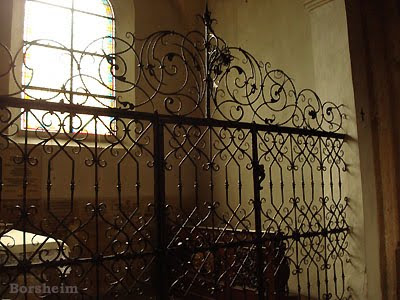 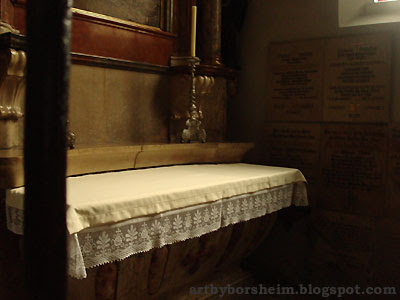 Posted by Kelly Borsheim Artist at 6:46 AM 4 comments:

I wanted to show you the stairway in the SchlossMirabell or Mirabell Palace in Salzburg, Austria. Along the walls, in elegant niches, are stone carvings of male and female gods from Greek mythology. However, I was rather amused by the stone rail. Big babies, perhaps putti without wings, sit atop curvaceously carved marble. 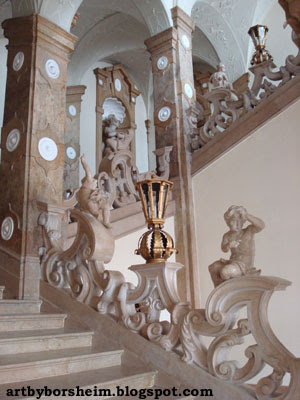 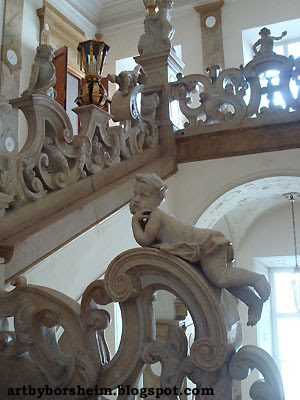 Putti is an Italian word and is the plural form of ‘putto.’ It means ‘male human babies.’ However, over the years it has come be used strictly as an art term, small babies usually with wings. I get the impression that they could be cherubs or small angels, but it depends on the context of the artwork. Putti are generally associated with Cupid or Eros, and thus would be present in art depicting mythological subjects. They are generally associated with love, or sometimes a mischievous love. 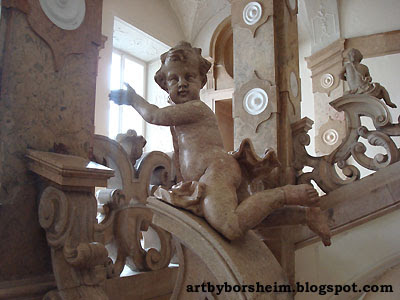 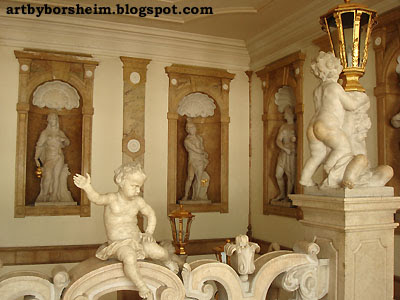 Like real babies, these sculptured figures are twisting, wriggling, and vivacious. I especially enjoyed the stone babies who seem to be gesturing to guests to move on up the stairs. And then once at the top, I got a kick out of the baby who is lying back with one wrist to his forehead as if saying to himself, “Doh!” Drama Queen . . .

Since these babies are not winged, perhaps there is another significance that I did not learn when I was in Austria. Any thoughts? 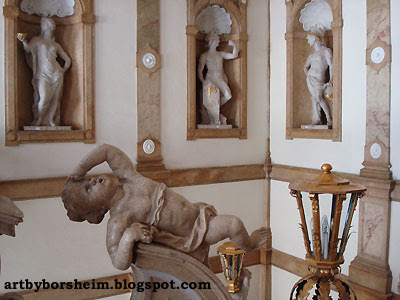 Posted by Kelly Borsheim Artist at 3:45 AM 2 comments: