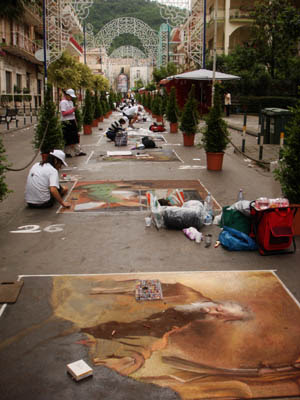 Here is how the competition in Nocera Superiore, Italy, for street painters looked in the early morning.

After this, I leave you with a few images of the finished works. There were 80 madonnari there who worked throughout the night to create drawings that fit the theme this year: The Life of Saint Paul.

These are not in any particular order. I do not know which artist won. I mean, I was told, but I did not know the artist. I like the diversity, but was a little surprised at which images (famous paintings) were chosen more often and which I was hoping someone would have re-created but did not. A decent range of styles was presented in this competition. 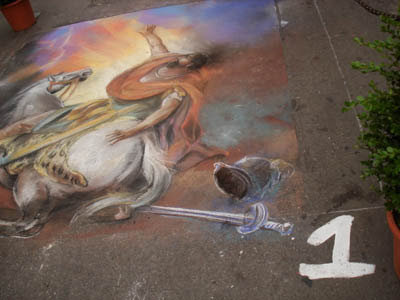 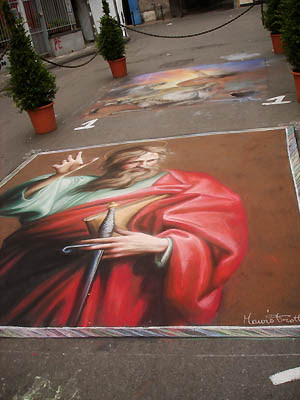 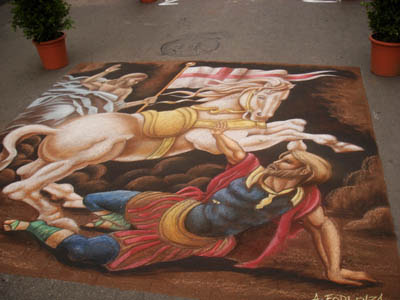 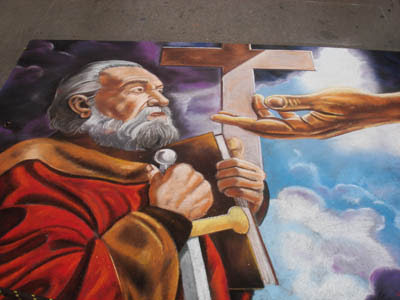 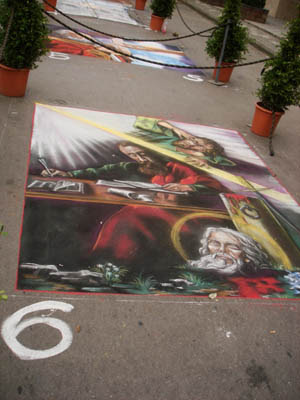 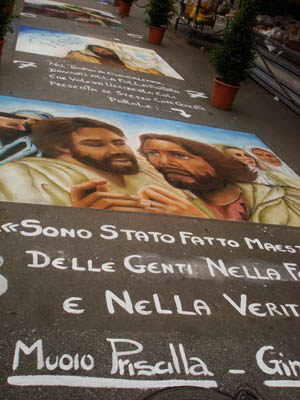 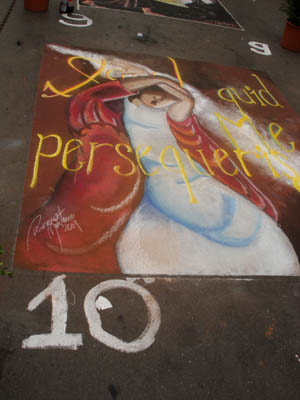 Posted by Kelly Borsheim Artist at 11:19 PM No comments:

Ok, so my road trip is over and I have since organized an art exhibit at Sei Divino’s for some of my friends (reception = 30 May). I also street paint in Florence every Wednesday and Thursday (from 10 am to midnight!), so today is my catch-up day. There is lots to report about the street painting competition I attended last weekend in Nocera Superiore, Italy, but I will break it down into segments.

Artist Gabrielle Abbott and I took the early and inexpensive regional trains south last Friday morning, changing in Roma and Formia, and arriving about 4:30 pm in Nocera Superiore, in the mountains not too far from Napoli (Naples). Our group of madonnari (street painters) representing Firenze (Florence) numbered 19 artists. Some drove down, so we stored our luggage in their car while we got the lay of the land.

The streets in Nocera Superiore are made of slightly different materials from those in Florence and the glass-like surface does not accept pastels very well. The first order of business for all 80 madonnari was to prepare the surface, not unlike priming a canvas. The old-timers told us first-timers that the trick is to apply zucchero (sugar). Some used actual sugar, but most used Coca-Cola. I liked the idea of pouring Coca-cola onto the street instead of drinking it because I do not care much for soda.

Unfortunately, at least two of our group bought Sugar-Free soda without realizing it. Doh! Some of the local madonnari used more gesso-like materials. They all seemed to have their preferred “secret” recipes. 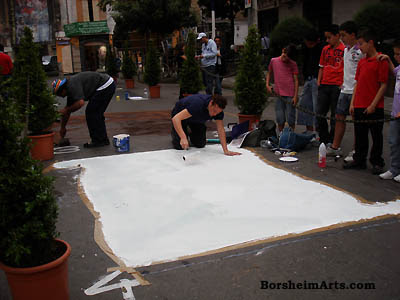 Our capo (head/boss/leader) Claudio told me that it is helpful to put dark pigment mixed with the cola for the dark shapes of the drawing and yellow ochre for the light areas. I was nervous about finishing, but I also wanted to learn new things, so I tried it. My spot was number 27, which I took to be a good thing (since this is a number divisible by three). In one of these shots, you can see my preparation. I ran out of real cola and used some of the sugarless stuff -- those are the runs you see in the reflexion. Those areas did not accept the pigment as well, so my experiment told me a lot. Do you see the face in this image of my empty square? The dark shapes of the flowing zucchero-free cola make up the mouth and the shadow under the nose. 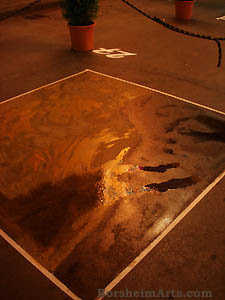 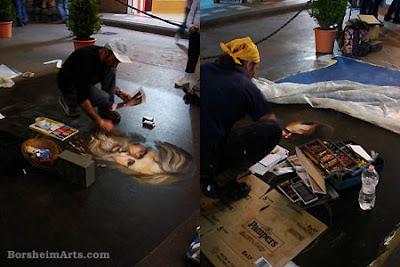 For various reasons, our group got a late start. But after the cola dried (and we were fortunate that the slight rain had stopped earlier), I started to mark the face measurements of Rembrandt’s St. Paul before dinner. However, once I stood up, I thought the figure would be too small. The arte degli madonnari is a different type of art. The goals are to wow and make an impression in a different way than fine artists normally shoot for. Small figures and fine details normally do not belong in street painting art.

The provided pizza dinner ran a couple of hours and I also photographed the parade, lights, and live music concert. It certainly felt like a festival in this small town, although not entirely what I had imagined. 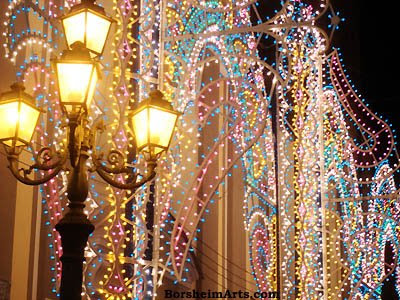 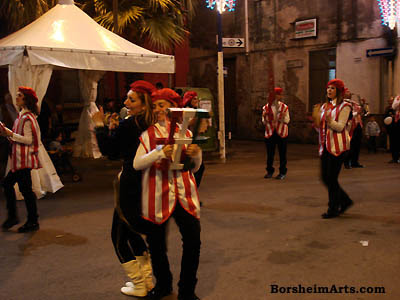 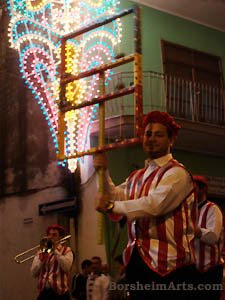 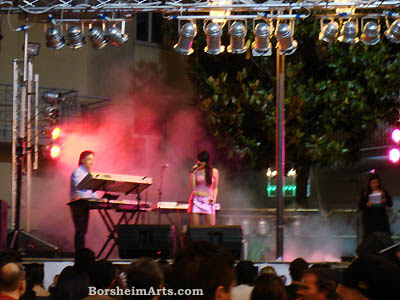 Whenever I have to make a decision (especially about my art), I try to remember what drew me in the first place to the image I wanted to create. For this Rembrandt, it was the composition and quality of the light. Really, the figure was not so important to this idea and had I chosen to enlarge the figure, I would have cropped out some of the shapes that gave me the emotional response I enjoyed. 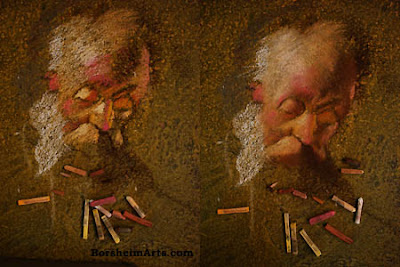 My colleague and neighbor Kumiko took this photo of me before my white T-shirt souvenir from this year’s competition became not so white.
And this final image is how far I got by 3 am when Gabrielle asked if I would go to the place in which we were to sleep. Only the floor was left and I was only able to sleep for about 30 minutes. A bit of a strange evening . . . 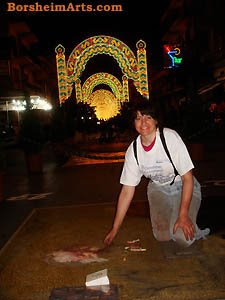 Follow-up on the LAW:

And, after two hours of waiting Monday (back in Florence) simply to be told that the computers were down and “come back tomorrow same time” and waiting three hours on Tuesday with the Questura (Italian immigration police), I finally have my Permesso di Siorgiorno. The couple I live with are quite relieved and told me that evening that seven days ago, a new law came into effect in all of Italy. Any Italian who knows of a clandestino/a must report this illegal immigrant or face up to three years in jail!
They must have had a stressful week with my questionable status, although I had been doing everything I was told to do. And I like having my new modernized photo ID card! 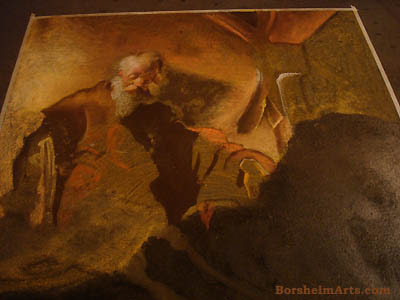 Posted by Kelly Borsheim Artist at 12:43 PM No comments: