Today the body of the great artist Vasily Fedorouk was cremated. I wish that I could have attended the funeral service for my friend and mentor in Chicago yesterday. I asked his wife Dilbarra if there was anything I could do for her, knowing that nothing will bring him back. She said, “Continue to tell the world about Vasily’s art. He was always so happy each time you wrote something for him or about him.”

Ukrainian born sculptor Vasily Fedorouk died in a horrible freak accident after saving his beloved dog Era during a family outing last Sunday in the Chicago area. In minutes, everything changed.

I share with you here three of his sculptures, the first two in stone, the latter in terra-cotta. He was a prolific artist with a great sense of design and a full understanding of quality. 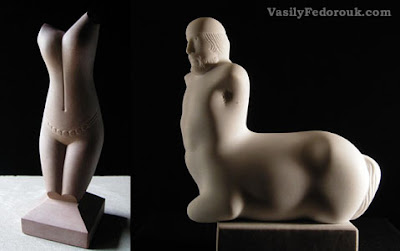 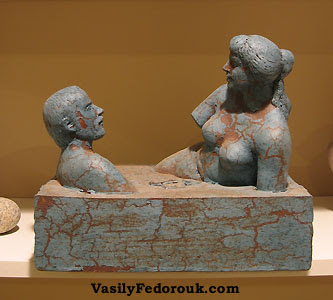 This next image was taken during my last visit with Vasily in his suburban-Chicago home in September 2008 before I left for Florence, Italy. We are shown here with his beloved dog Era at his dining room table. We often kept in touch via the Skype and e-mail and I had an enlightening and wonderful conversation, as all were, with him on his birthday on August 16th. He had just earned 59 years. He had joked with me that while the number was not too high, all of his body parts were still working just fine. We both laughed. He had more energy than most people. 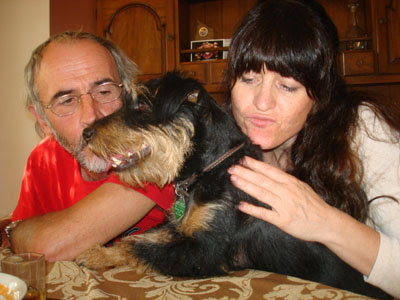 At the time of his death, some of Vasily’s sculptures were part of a 2-person exhibit at the Ukrainian Institute of Modern Art in Chicago. The exhibit has been extended to at least September 6, 2009, so if you have the opportunity, please, please go see his wonderful artworks in person. 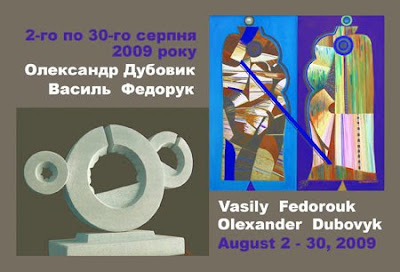 I know that Vasily changed my life in a significant way. I have grown as an artist because of him. I only hope that some part of his spirit can live on through me. And I will miss him like no other. And we all will never know the compositions never realized from his fertile imagination. 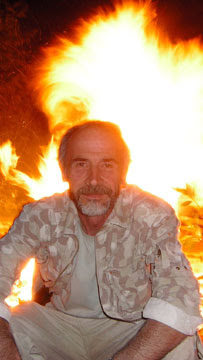 Posted by Kelly Borsheim Artist at 6:08 AM 3 comments:

I have been back in my Texas home studio since July. Although I love the mountains and found Austria to be a very beautiful country, I learned long ago that I get the “withdrawal shakes” if I am not creating art for more than a week. I was looking forward to getting a hammer and a chisel in my hands again and spent much of my holiday time figuring out which stone I wanted to work with first.

The winner was . . . a project I started in 2002. Inspired by President Bush’s reactions to the horrible events on September 11, 2001, I began a complicated composition in Canadian marble.

I will write more about my thoughts on this work in the coming posts, but here I wanted to include images of the stone as I received her from the quarry in western Canada. These images were taken 25 July 2002 from various angles in the stone. I will be carving a vertical composition. 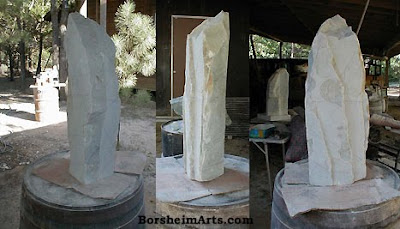 My apologies for the “naked legs” shots. It is helpful at times to have relative size comparisons. And I like to climb things, so it was more fun to climb up on my wine barrel than to move the stone onto the ground to take a “bird’s eye view” image of the marble.

Thinking of two new babies: my marble carving and . . . I would like to take this opportunity to welcome into the world today my newest nephew Evan! 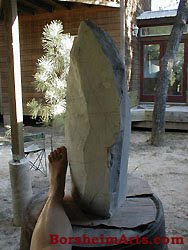 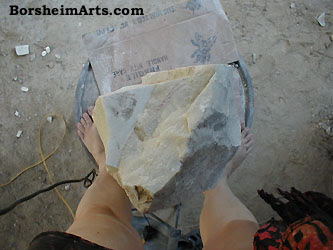 Posted by Kelly Borsheim Artist at 3:54 AM 2 comments: