Well, a lot has happened since I last wrote to you. On my end, I drove over 18 hours to a suburb of Chicago to visit Dilbara Arapova, the wife of my dear (and late) friend Vasily Fedorouk. Our visit was barely 24 hours, but we packed a lot in. I took this shot from their living room, enchanted by the morning light and shadows. Three of Vasily’s sculptures can be seen in part here. 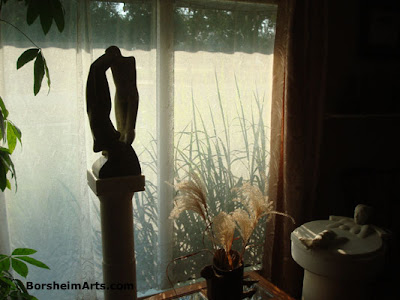 Then I drove another four hours to get to Indianapolis to see my good friend and gallerist Don Elliott. He owns the Franklin Barry Gallery and was featuring my work for the art event. The First Friday Gallery Walk was a lot of fun. Fewer partiers and more people really interested in original art. Labor Day weekend turned out to be a better turnout than I expected! I was really happy getting to visit with kids as well as grown-ups; reconnecting with familiar faces and making some new acquaintances. We got to share stories. And I got updated on the travels of several patrons of the gallery that I have met in years past. This next image shows our little “after-party dinner” at a nearby restaurant.
Don is sitting next to me, while artist Travis Little and I hold down the end spots of our group of friends. What a day! I think that Don and I arrived at his home around 1 a.m. 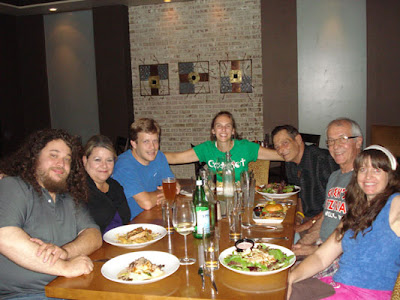 I did not leave the gallery until they closed on the next day, only to drive another more than 18-hour drive back to Texas. I slept maybe 3 hours along the way, so once I returned to my home studio, I fell into a coma-like nap on Sunday. I woke to a call from John B. asking if I was close to the wildfires. Well, that was a bit sobering for an eye opener! He ended up coming over to help me pack what we could. Thankfully, I had not unpacked the art in my car that I brought back to Texas from Indy. The frustrating thing was that there was so little information. Not on TV, not radio that I found, and even the Internet offered little. As the hour got later, John just told me to give up. He believed that the authorities were more focused on getting everyone out than they were in talking about details about the fire. But then, lack of accurate information is often the case in emergencies. John, Cat (the abandoned kitten that now has a home here), and I drove off around 5 a.m. to Austin. 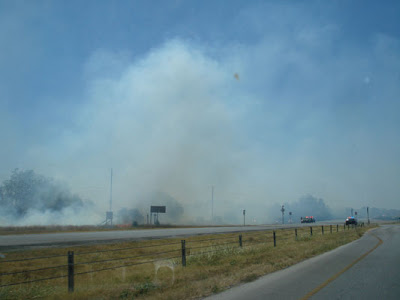 We drove back about seven hours later, around noon on Monday, September 5. These next three images were shot through the car windows. The first image was a fire we passed near a propane supply place not far from the Austin-Bergstrom International Airport. This fire had not been reported on the news that we had seen.

The middle image of this series was taken on Farm-to-Market Road 812, just inside the Bastrop County border after leaving Travis County. I must say, it is really difficult to tell distances on things like mountains … and smoke. 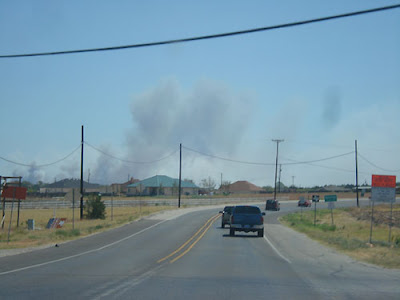 And this third image was shot just as we turned onto Greystone Lane. This dirt road goes for about three-fourths of a mile before my driveway starts. That may have been the closest the fires got to our neck of the woods, but it was hard to tell. We had received a call that the fire had jumped a road near the Cedar Creek post-office (a 10-minute drive by road, not sure about crow-flying distance). But I never saw anything that confirmed that the fires had moved that far south.

For the next few days, John and I returned to the house during the day, working and cleaning up dead leaves, plants, and trees, and moving it from the house. We spent the nights in Austin at John’s place with Cat.

In all honestly, I feel a bit daft showing you these not particularly dramatic images when Facebook enabled me to see more of what was going on in the thick of it. Several of my friends have lost their homes in nearby Bastrop. Too many more that I did not know have lost so much. The drought this year and the 3-digit temperatures have been with us longer than “normal” and apparently this is the worst dry spell Texas has had since recorded history.

Still today (the 9th), I have been back in my outdoor studio carving marble and working indoors during the hot time of day again. I have been sorting things and trying to figure out what I have that can be donated to many of my artist friends who are now homeless. I finished my last book edit yesterday for my project “My Life as a Street Painter in Florence, Italy” and I must say that I cannot wait to hold the book in my hands! So, good things and horrible things: what a summer of yin and yang. 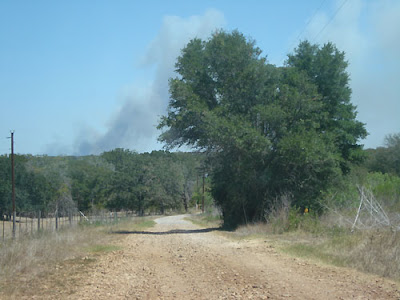 Posted by Kelly Borsheim Artist at 8:51 AM No comments: