Oracles and other fortunetellers have been popular and intriguing since man became aware of himself. Curiosity being one of our human traits is another reason that we sometimes want to know our futures before we experience or create them. 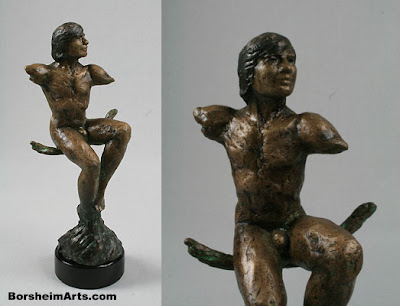 So, with that in mind, I hope that you will come to this next event to see my newest bronze figure sculpture, “Seer.” He debuts THIS Saturday at the Dripping Springs Artists’ Studio & Gallery Tour. There will also be drawings for gifts and refreshments, as well as other perks. The Wesley Gallery organizes this event and doors are open to all. I will be a guest artist at Philip and Michelle Hoggatt’s Carved Stone, and will have new works with me.

Happy Birthday, Vicky! I love you. 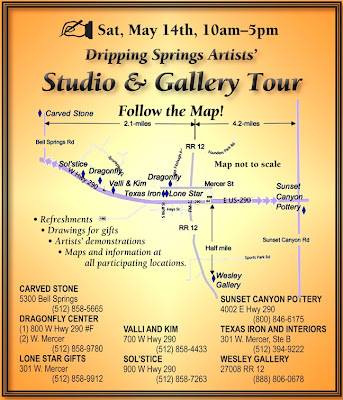 Hello again. If you have followed along much on these posts or my art newsletters, you may remember that I tend to work the whole piece of art “at once.” Not literally. What I really mean is that I try not to leave any part too far behind the development of the whole.

In my work on the marble “Gymnast” sculpture, it became time for me to remove some of the base. I know when it is time to remove some of the support when I can no longer envision carving away parts of the figure that I know must be removed because they start to look tiny in comparison to the part next to it. I wanted to shape her hips more, but the stone beneath her was just too overpowering. And also, as I worked the hips, I knew that I would want to start designing the way her hips connect with the shape I want to carve underneath them. 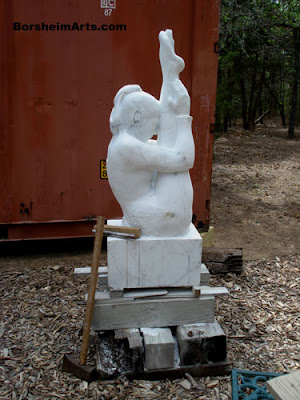 This first image shows the line on the left side of the marble base that I wish to cut off. Note that my wooden support and levelers are location outside of this mark. My first task is to move the supports inside of this line so that the stone will not fall over after I remove some of its bottom.

Since I want to keep the marble block that needs to get cut off, I need to take some extra care when splitting the stone. Normally, I would tip the sculpture on her side so that I could use my diamond blade to cut a “safety stop” into all sides before splitting. However, these days I am working alone without access to another human being when I want one. And if I tried to tip my heavy stone girl over alone, I would either hurt myself or hurt her. Neither is an acceptable option. Safety first.

Instead, I am trying to be patient as I drill deep holes into the stone on the three sides that I can access in order to guide the break once I am ready to make it. Some people think that the mere fact that I carve stone means that I am a patient person. That is a poor assumption. I think that we are all patient in some areas, and hardly at all in others.

My little neck of the woods, Cedar Creek, Texas, recently made the NBC national news for our unusually early drought situation. (The rest of the summer is bound to be another brutal one for our plants!) With the sun and heat we have now here, I have only been working a few hours in the mornings and again in the early evening before dusk on my marble. And not every day. And the drilling is going slowly.

I find myself getting impatient and wanting to just split the stone and hope that it breaks along the line I want. But, the only way that I have successfully convinced myself to settle down and do it right is to remind myself that the marble really will not care. No one (but you, I suppose) would actually know . . . and it would be up to me to redesign my intended sculpture. So, my impatience could cost me a lot of time. And the problem is totally avoidable. Finally, I am terrible company when I am angry with myself. 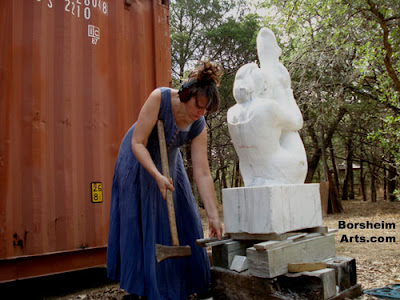 This second image was taken with my camera’s timer as I used the back end of the axe that I use to chop wood in the wintertime and a metal pipe to hammer the supports further into the stone. I scored the safety lines on the sides and began drilling holes after that. Thank you for following this journey… I wish you patience (when it is called for).

Posted by Kelly Borsheim Artist at 7:04 AM No comments: