This past Monday and Tuesday, my streetpainting colleague Sukyong (from Korea) and I recreated Michelangelo’s “Creation of Man” from the Sistine Chapel. There seemed to be a lot of variety in activity and people in the street these days. Sukyong chose to draw Adam, while I got God and his companions on the right side of the composition. 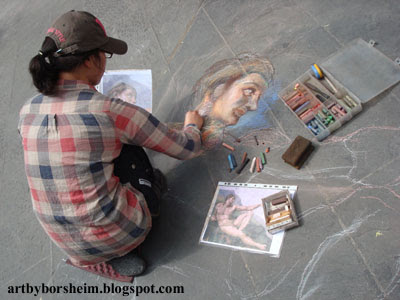 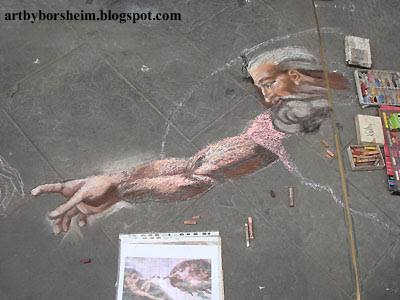 Across the street from us some construction workers continued to throw building stones out of the window to make room for whatever renovation they were doing – and I would love to be able to see! I was thinking that it would be fun to carve these stones and in lieu of that, throw them with the guys. 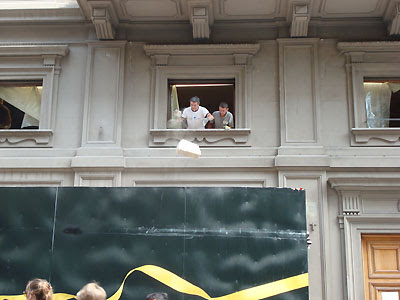 Now, my birthday was a while back (31 July) but packages do not always arrive here in a timely manner. So, I was very tickled when a friend brought a package from my sister Amber to let me open it in front of a few friends here on Via Calimala in Florence, Italy. Amber started a new business based on some party favors she made for her own wedding last year. It is amazing how far she has taken this business. Check out WhiskerWorks.com. In the meantime, my birthday package included two of her handmade mustaches-on-a-stick, a card with a chimp on the front, and a vintage dress. So, this next series of images show me using the mustaches with the street art. 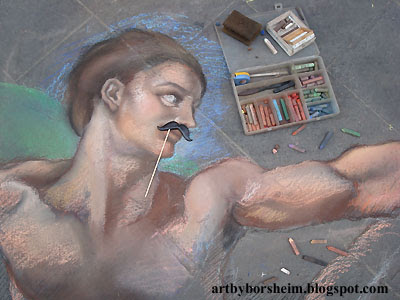 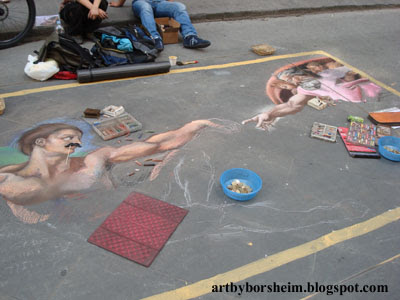 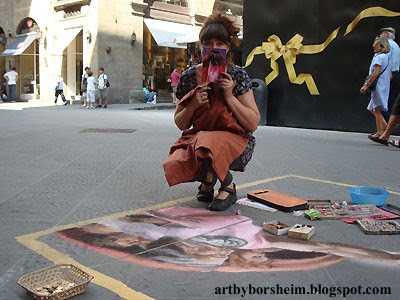 Later on, after it was dark, a French family came by and I offered some chalk to each of the three boys. They stayed longer than most kids, the youngest sporting the bluest chalk-laden hand that I have seen in a long time! The parents really enjoyed the fact that their kids had an opportunity to do something so artistic and different than they ever expected during their holiday. 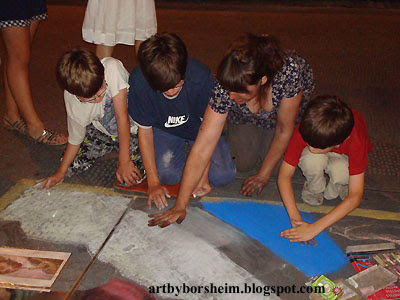 Also, later that evening, I continued what may become a little tradition for my other colleague Johnny and me. There is a local character here, Massimiliano, who comes to visit us quite often. He is a photographer. We have known him for years now, but we are getting to know him better and better. The last time that Johnny and I recreated Michelangelo’s “Sacra Familia” (aka “Tondo Doni”), Johnny had the idea to do a portrait of Massimilano as one of the nude figures behind the family. Max posed as I drew in his dark mustache and hair. Closer to midnight, Johnny added a camera and few other details for fun. We saw more of Max that day, as he brought friends over to see him in the famous artwork.

So, I added Massimiliano’s black mustache and also his dark curly hair to the small face behind God. He was a bit pleased the next morning that despite the streetcleaner’s pass over our work, the mustache remained. 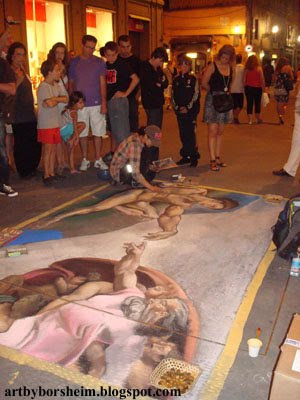 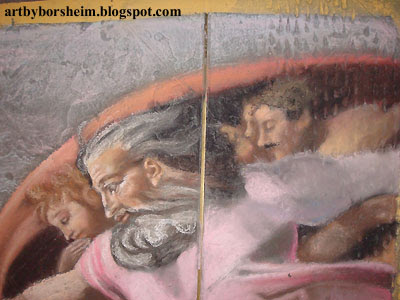 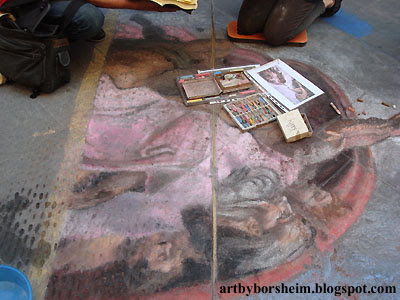 On the second day, I seemed to attract quite a couple of characters. I will not mention the first one because he was a bit scary and I was relieved when he took off. But the second was a rather charming fellow from London. He squatted next to me that second morning as I was working to fine tune my drawing of God. After I looked up, we began to talk. He has a wonderful, Old World face, perfect for portraiture! I asked him if I could take his photo and he allowed me this as long as I did not put it on the Internet. Since he did not forbid me to talk about him, I will share a few things here. However, I will call him Joe.

I do believe that Joe is homeless. Joe likes to press flowers in books (and showed me this book) and write poetry. He loves Caravaggio and seems quite lovely to chat with. He is very expressive and curious about a lot of things. He asked me if he could bring me some dinner. I declined since we had a madonnari (streetpainters) meeting that night, so instead he said he would come back at 4 p.m. if that was OK. Well, I was a bit surprised when he did come back. And especially when he brought salmon, bright green lettuce, mushrooms, and some nice brown bread. I told him that this was quite elegant for a dirty streetpainter and then he confessed that he stole it!

Earlier I had been telling Joe how Sukyong and I had been shoeing away the gypsies, especially after one of them stole money from our baskets the day before. They have been getting more aggressive than usual and even working in pairs now to distract us a bit. So after Joe admitted his theft, he explained, “I would never steal from you. I never steal from individuals. I do not take purses or wallets or even things from a person. Only when I am hungry, I go into the markets and take what I need.”

Joe then told me that recently he lost his bag. He said that he has hidden away his most important things. He had his book of poems in the bag, but said that surprisingly this did not make him upset as much as losing the “green acrylic” that was inside. After all, his poems were “up here” as he tapped on his head with his index finger and “I still have them.”

One thing for sure, life in the street is rarely dull, although in truth, my muscles are quite sore and tired from my work there.

Happy Birthday to Nathan and Mark! 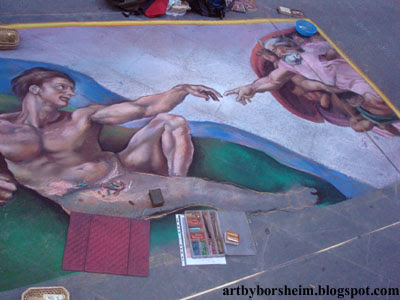 Sometimes it is difficult to know what is the right thing to do. I have a lot (well, too many) well-intended friends who ask me why I insist on returning to Italy “without a real reason.” Sometimes they will go as far as saying that I have no business going on such a trip and would do better to create art in my American home.

I try most of the time to be polite to these people with my responses, but really there are times in which I want to scream something like, “Are you NUTS? I know what I need more than most people would.” Maybe I will not be enchanted forever by Italy, Florence in particular. Maybe I will stop learning what the Renaissance City has to teach an artist. But right now, I am fascinated. And it is the right choice for my continued growth. And it is rarely important to me if anyone “gets” that.

On the other hand, once people see that you have done this “dangerous” or “risky” thing and not only has nothing bad happened, but life is actually been good, all seems right with the world.

I recently published one of my art newsletters in which I posted some images in order to share some of the reasons that I continue to find Florence so hypnotizing. Check them out by clicking here. 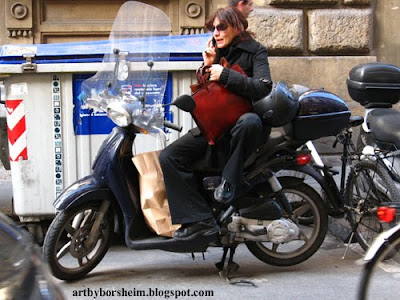 Then I thought I would add a few more here on this blog. I love this image of a woman (with a great gesture!) who stopped in the road to actually answer her phone! This image just struck me as so typical, and yet … funny.

The second image just goes to show you how illusive and wonderful light can be around the buildings in Florence, Italy. I have only seen the light do this one time! It was if the skies were approving of sculpture. Wonderful really. 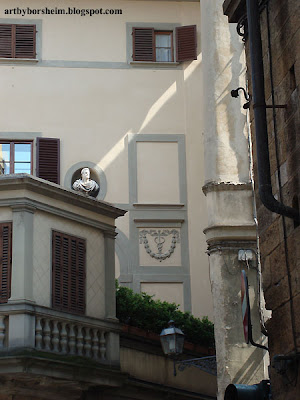 And these last two images are dedicated to my Aunt Carole (who is also my Godmother), who celebrates her birthday today in Minnesota. Aunt Carole is also one of my coolest supporters. Both images were taken at Gilli’s – a famous store/bar on the corner of Piazza della Repubblica. I got such a kick out of the white chocolate copy of Michelangelo’s “David.” Florence really seems to enjoy chocolate as much as art and various types of coffee. And do not get me started on leather goods . . . 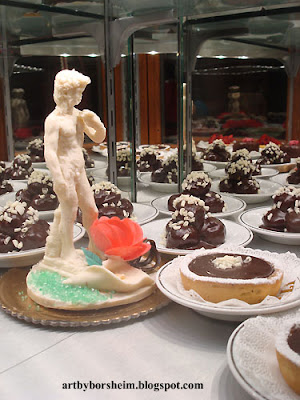 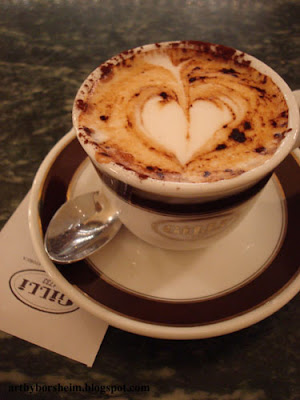 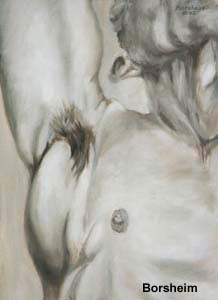 Art modeling is not a job that just anyone thinks of finding. In fact, I would say that few people might even actually think about this kind of work.

The Dave Project is part of AVAA’s COLLABORATION Exhibit at the Dougherty Arts Center, AUGUST 5 – 28.

The king of models, Dave Larson, is the subject of this painting titled “Praise.” Dave is wonderful because he really works at coming up with interesting positions. As he got into this one, he said he was inspired by Michelangelo. It was a lovely pose on his knees with an arched back as his arms were raised above and slightly behind his head. And it was very difficult for him to hold as you might imagine. I cannot remember, but I think he held this for 20 minutes, maybe two 20 minutes segments. I hope you enjoy this composition.


If you are interested in becoming an art model, you may find these resources helpful.
Kelly’s tips for art models

Book by Andrew Cahner, a professional artist’s model. This book tells you what to do (how to pose for artists), how to find work, and also includes interesting interviews with other models to help you learn more about unusual situations and even opportunities.

Posted by Kelly Borsheim Artist at 12:51 PM No comments: