Bus from Croatia into Serbia

Dear Art lover,
I am convinced now that I am an idiot.  Or at the very least, losing my thoroughness.
At least during the winter / non-tourist season (which starts after Easter, apparently), ferries from Montenegro to Italy only run on Thursdays and Sundays.  Ok… but they leave at night and arrive in the morning.  I need to be in Roma by the 20th, but I cannot legally enter Italia until the 19th.  The only ferry I could take is on the 19th.  I thought it was perfect… until I realized the ferry left at 10 pm instead of 10 a.m.   The ferry runs from Bar, Montenegro to Bari, Italia.  The next train to Roma is not until afternoon, and no fast trains from Bari.  I would be a day late!

Also, I cannot stay in Croatia longer than 90 days.  I cannot return to Italia or any part of Schengen territory until after 90 days have passed.  I had planned to leave Croatia just before my 90-day limit and explore Montenegro for a few days before taking a boat over the Adriatic Sea to return to Florence.  So, now what?

Plans B:  Should I fly to the UK?  Well,  I might if I could, but there are not many flights this time of year.  But mostly, my friends are on holiday then and not in the UK.  I found a flight from the capitol of Montenegro, and a bus to Dubrovnik, but I could not find anything for the next leg into Montenegro.  I thought to go to Bosnia, but the bus only takes me to the edge of Croatia.  I would have to take a taxi for 20 miles… hmmm.. I thought of so many things, but always there was some piece missing.  Or missing to someone who does not understand the local languages.

I guess living in the south US most of my life did not help me get a clue that March is still winter, and public transportation is not necessarily a given even in Europe.

Then . . . mathematics triumphs again.  One night, I got a good, long sleep and around 6 a.m. I had an idea.  When I actually crawled out of bed two hours later, it took only an hour to have it all come together.  The math rule?  That the simplest solution is often the best/right one.

I remembered that I had friends.  I did not need so much to see some place new.  I could be happy to reconnect with a family I visited two years ago. 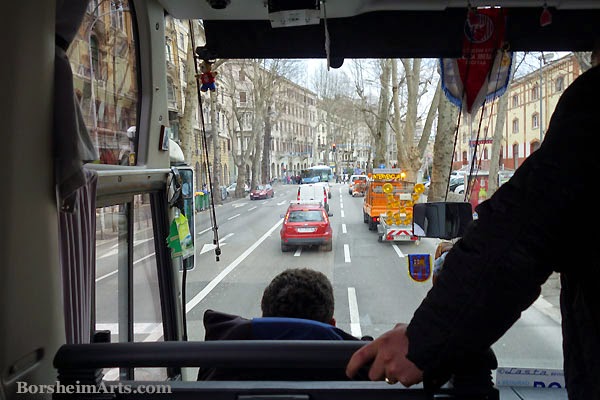 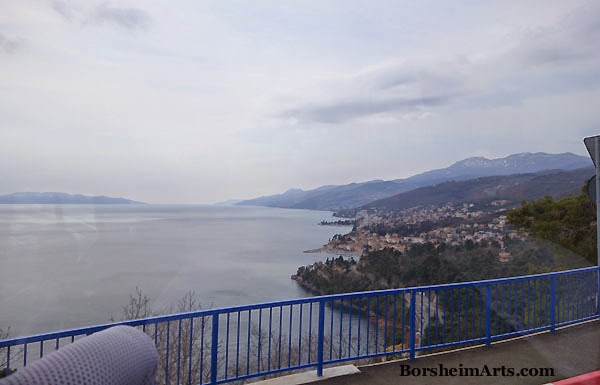 And thus, I was on my way to Serbia by bus.  And frankly, I did see some new places.  And SNOW!  The bus took me almost straight east and I was able to see something more of Croatia!  I include a few snapshots here and yes, that is a pastel drawing I started from one of my photos I had printed in Umag before I left.  I did not want to dig my laptop out of my backpack during travel and the battery was not that long-lived in any event.  And yes, that is snow in the background!

The bus was warm.  I finally got some sewing done, and reading, and some much needed sleep.  And the bus driver was so nice to me.  I assumed that I was the only passenger he did not already know.
My Serbian friends are wonderful and I am grateful for so much.  Today I go to see the Tesla Museum in Belgrade! 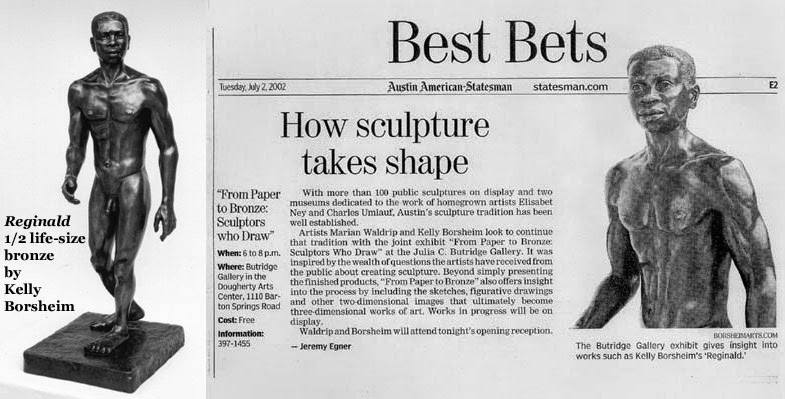 The deadline for my first crowd funding project seems too close for comfort considering that thus far, I have only reached 13% of the goal for getting the wax sculptures cast.  Kickstarter tells artists that is normal to have a lull in the middle, but … it makes me nervous.  However, I am happy to see that there are fifteen individual backers!

Will you help me spread the word by sharing the Kickstarter “Casting Call:  I’m Melting . . . Melting!  Into Bronze” link:
https://www.kickstarter.com/projects/borsheimarts/casting-call-im-melting-melting-into-bronze

and pledge if so desired!

Thank you so much for helping me make some bronze art a reality,
Kelly

Posted by Kelly Borsheim Artist at 9:19 AM No comments:

Motovun is the small town on top of a hill in northwestern Istria in Croatia where Boris took me on our day trip last Friday.  It is a cute little stone town.  There were actually a few people we saw about.  I was surprised at how deserted were all of the towns we visited that day.  Motovun had some construction workers ripping up one of the narrow streets to work on the pipes below ground, but other than that, very few signs of working life. 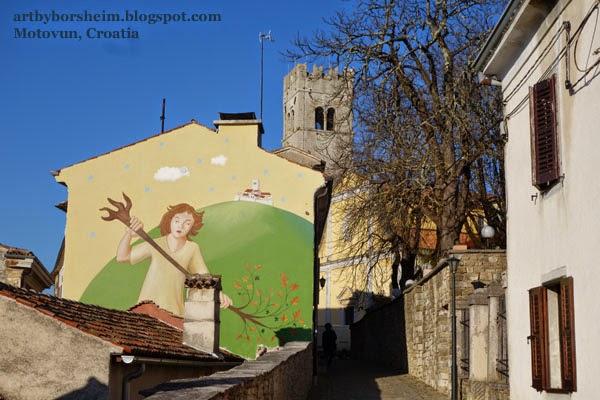 On the drive back to Umag, Boris explained to me that Motovun is Istria’s truffle capitol.  And then he explained that they use dogs to sniff out the truffles.  He said that it was a bit horrible because they raise the dogs by giving them only small amounts of truffle from birth to train their noses and appetites.  Then when they are starving, they send them out into the woods to find the delicacy.

I had always assumed that truffles were found by [knowledgeable and licensed] people in the woods in Italy, as mushrooms are.  It had never occurred to me that they were hunted with the use of dogs!  But then, I did not really know that truffles were underground and people could not find them without aid.  And, I wondered how a dog could live on slivers of truffle alone and also if it was really worth it to feed animals this relatively expensive stuff.  I mean, did they find more than their body weight’s needs?  Are truffles even nutritious enough to sustain a life?


I am glad that I asked my friend Judy Witts Francini.  She knows everything about food, certainly Italian food.  And even if I am exaggerating in my praise, she certainly knows how to find out about something if she does not know it.

Judy rightly surmised that English is not Boris’s first language.  As such, her theory is that Boris used the word “starving” when he meant “hungry.”  She then explained that, in Italy at least, “When the dogs are born, the owners put truffle oil on the mother's nipples so when the puppies feed they relate eating to truffles.  When they get bigger the people put a little truffle in a small ball and throw it and have the dog find it or put small bits in food to reward the dogs.”

“So early in the morning, before the dogs have eaten anything ["starving?"], they go hunting.  When they find a truffle they are given snacks.”


THIS makes more sense.  Plus, I had asked Boris what the dogs ate when truffles were not in season and he replied, “regular food.”  No doubt I was “lost in translation.”  Always good to give the benefit of a doubt (sometimes even with speakers of our own native tongues).

Here is a post that Judy created on truffles.  She shares images of truffles and a truffle dog!
http://www.divinacucina.com/2005/10/truffles-not-chocolate/

Judy offers cooking classes, recipes, and shopping experiences.  She knows all the best in the food business in Italy and she knows how to give you a great experience.  I know because I was lucky enough to join one of her market tours in Florence.  And here is a taste (pardon the pun) of her 2015 culinary events:
http://www.divinacucina.com/2014/11/sharing-the-love-plans-for-2015/

Now, back to me.  Hahahaha… Yesterday I added two new rewards on my first Kickstarter art project.  I want to entice you to help me create some bronze art.  Please participate and share this link: 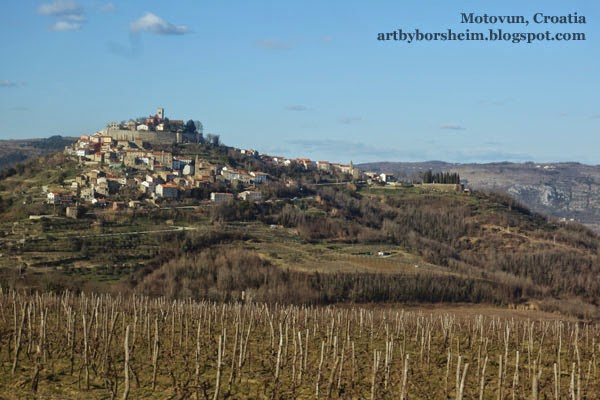 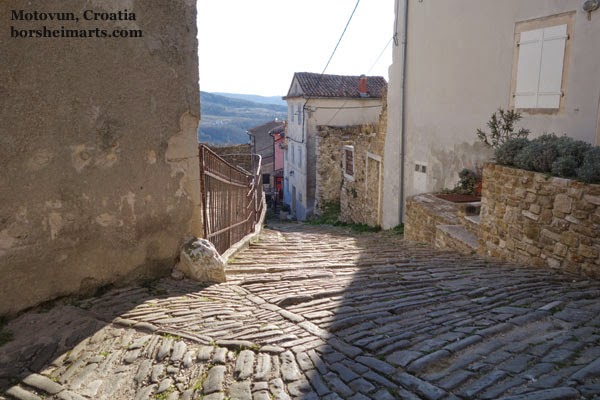 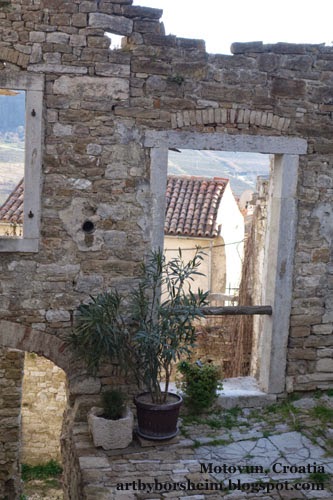 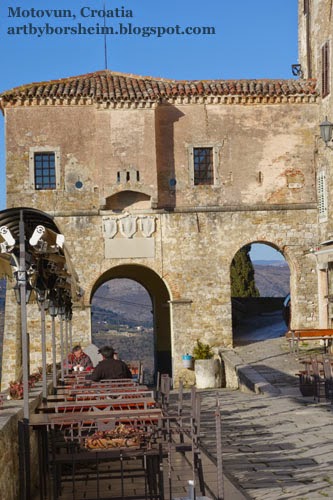 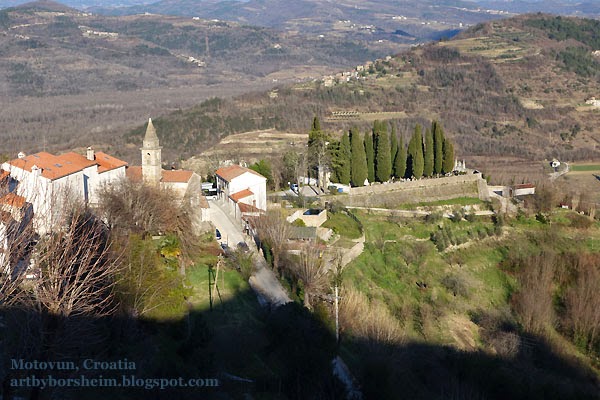 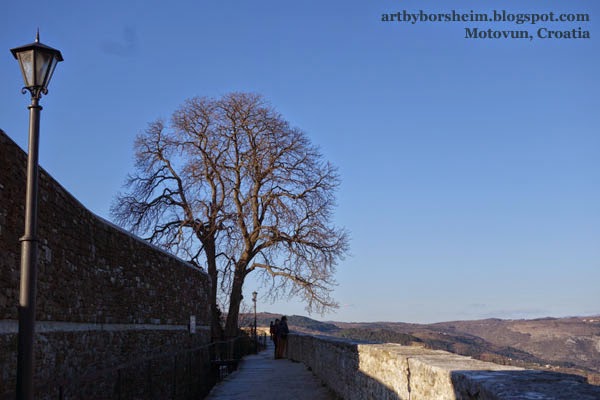 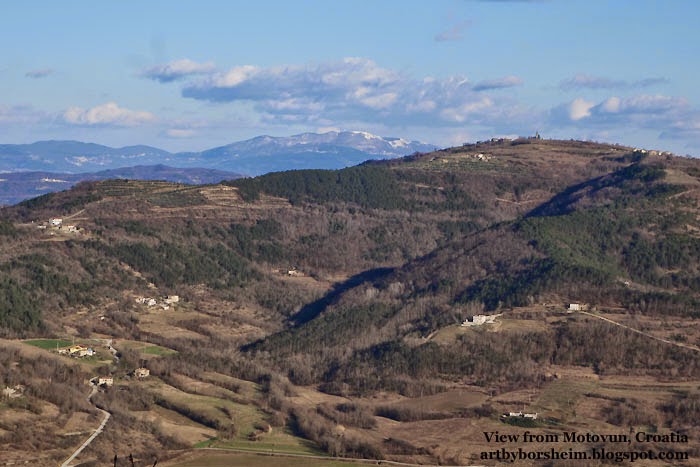 Posted by Kelly Borsheim Artist at 4:10 PM No comments: 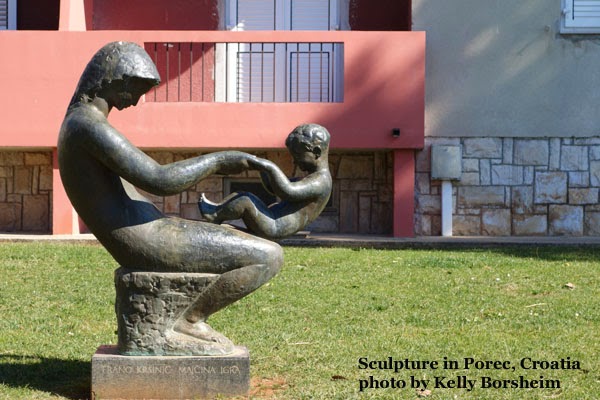 I am busy trying to maximize the opportunity that Kickstarter has given me to find a way to realize my bronze art, so I apologize for this brief blog entry.  Here are a few images from Poreč [on the sea] and Pazin [in the very center of Istria].  Poreč has a glorious basilica to which tourists flock.  The mosaics are stunning.  I share this image of part of the altar because it includes the gold, as well as the luster of the sea shells used (the circles). 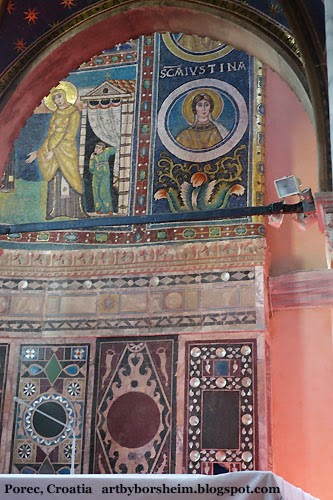 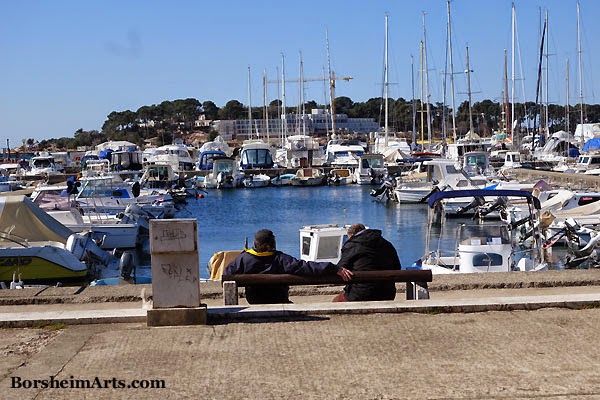 The last two images are from Pazin.  I always get a kick out of satellite dishes and other modern technology being planted on old architecture.  There is a museum of the history of Istria in Pazin.  I am debating on creating a blog post especially on that at a later date.  In the meantime, please enjoy these images.

If you would like to see the new reward I added to the Kickstarter project, or are curious what it is all about, please visit:
https://www.kickstarter.com/projects/borsheimarts/casting-call-im-melting-melting-into-bronze
Thank you so much,
Kelly 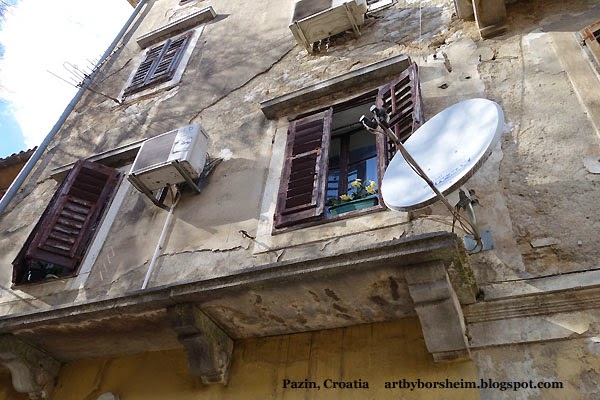 Posted by Kelly Borsheim Artist at 12:37 PM No comments: