How many friends does it take to help a girl buy a car in a foreign country?  Well, in my case, in Italy, I would say more than a handful.  I was not really prepared to buy a car just yet.  I mean, that I WAS, after having gotten my international driver’s license when I was in the US and I gave myself three weeks to research and find a car to buy [before the license went into effect] so that I could go to the quarry and start carving a new stone sculpture.  But after falling and breaking my wrist, the need for a car so soon drove away.

Then it was suggested that I use my healing time to at least start researching what I wanted.  I asked on my Facebook page for much advice from locals.  That posting led to a friend tagging me for an old car for sale in my area.  It looked ok in the photos, one owner (a 90-year-old woman), less then 75 kilometers (which is pretty amazing, especially if you change that into miles!), and decent looking tires [but bad spare under the hood].

However, I was nervous and did not feel ready yet.  I did not respond to the ad for about a week.  In the meantime, I did more research, vacillating about whether or not I really wanted to take action now.  I am still paying off my trip to the US after all and I cannot physically drive yet.  But, hey, I might as well go see it and re-learn what to look for in a car.

The man selling my future car met me at the bus station in Montecatini Terme, a town perhaps 40 minutes by transport from my home.  But he was in a hurry and I worried it was a scam.  I sat in the car, turned on the ignition, moved the gears around, but was unable to drive it (time and ability).  I took a few photographs that I thought my helping friends could use.  I asked where to put the oil into the engine, as well as where to check it, but stupidly did not even take a look at the oil myself.  Sheesh, what was I thinking?

This is only the second vehicle that I have ever purchased myself.  Before I got married, I usually drove whatever old car my father had to give me.  Once I got married, my husband made all the car decisions, often surprising me with a new-to-us Volvo 240 when he deemed the time was right.  But after college and before meeting “the man,” I moved to the big city of Austin, Texas, and bought a 1979 GMC Dura Van.  That was in 1987.  I paid $3,000 cash for it, with a partial loan from my father that I paid off sooner than later.  I had had a long-term dream to finish college, get a dog, buy a van, and drive to Oregon.  I did those things and in that order, coming back to Texas as an engaged woman.  In 2015, I gifted my van to a friend who does art restorations in Austin.  I loved that vehicle!

Back to 2017 in Tuscany (and single again):  I returned to my new hometown in the hills of Italy via bus after my short visit with the 1998 white Fiat Panda.  I had a conversation with my landlord [and his brother, who recently replaced his old white Panda with another] and showed him some of the images I took.  Later that evening he spoke on the phone with the seller and then me.  Trustingly, I committed to buying the car that night, but it was not for two more days that I returned to Montecatini Terme to do the title transfer and get driven home.  My landlord was there and looked over the car [saw a weld in my future] and met the man he had spoken to a couple of times by then.  I was handed the keys as the man and his friend drove off in a little Smart car.

I had bargained some, but gave all of my remaining cash towards the new car.  For those curious, the title transfer cost me 370 euro in cash [since I have no bank in Italy].  Had the size of the motor been larger, the fee would have been higher.  That is more than half of what I paid for the car itself!  My landlord took these snapshots of me with my new vehicle. 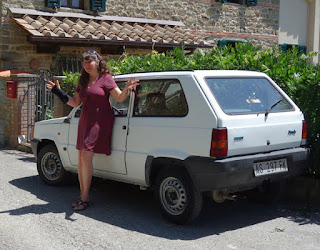 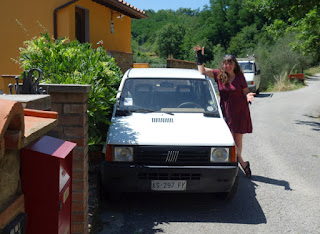 I am still not driving. Although my landlord and another neighbor helped me get an amazingly low quote on car insurance for when I am ready, I am postponing buying insurance, hoping to sell some art first.  But also, my right wrist is still not strong enough.  I could not even take off the emergency brake!  Another neighbor, who really encouraged me to get a car and helped a lot in the research, came over to take a look.  He later drove it over to his property:  it is illegal to park a car without insurance on a public road.  So, the Panda is safe there and I can even see her from my windows.

I am still thinking of a design to paint on her.  I bought a small can of blue paint for metal.  As I told the man in the hardware store, “I just bought an old white Fiat Panda.  Everyone seems to have one.  How will I ever find my car in the parking lot?”  I want a design that helps me recognize my new baby, but not one that shouts, “Kelly just drove by.”  You know, in case I do something stupid.  [Oh, and the low insurance price came in part because the agent will install a scatola nera [black box] in my car.  It will know where I am driving [so it knows the local speed limit] and monitor my driving habits.  So, perhaps the first year, I will be constantly taking an exam.  And towards the end of this year, I need to take the Italian driving class and exams and earn my Italian driver’s license.  So, I get to feel like a teen all over again.  Joy.

Ok, so here is one way that I hope to earn that insurance.  But really, anything I still have in stock or even many of the products, such as my book about street painting in Florence, or shower curtains, pillows, a phone case, prints on metal, etc. would help me while giving you something that I hope enriches your life… check out some of the art products here:  https://fineartamerica.com/profiles/1-kelly-borsheim.html 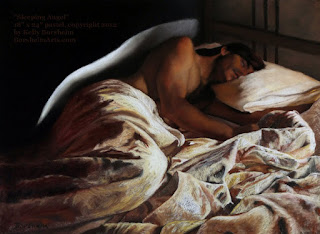 I look forward to hearing from you.
Peace,

Kelly Borsheim, artist
Go shopping and share with your friends:  http://BorsheimArts.com
Thank you! 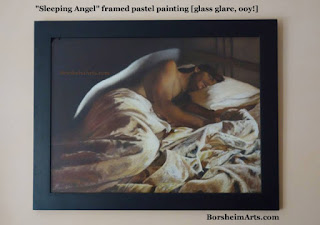 Posted by Kelly Borsheim Artist at 12:26 PM No comments: