Art and the Nude

However, this year I have not had the time to create something along this vein. Sad, really since I believe that art is the safe place in which we can explore all aspects of our humanity. That said, I still want to wish you a thoughtful abundance for the coming year. I hope that you can become more spontaneous (I linked this word because many people misuse it) and express yourself more often.

I recently wrote a little bit about my holiday with friends on Captiva Island, Florida. I stayed in artist Robert Rauschenberg’s former beach house there, owned by his collaborating partner and long-time friend, Darryl Pottorf. In entering the place, I found myself intrigued by a composition in red, black, browns, and white. I had this strange urge to photograph myself nude in front of it. This does not really belong on my “erotic art” posting because I do not know how to explain that I was not thinking sexual thoughts when this idea came to mind. Maybe more like “Nature Girl,” I dunno. That night, I did pose for my timer, but fully clothed, boots and all…

One evening, Darryl walked me over to the painting before we headed back to his place for dinner with more friends. He explained most of the objects or shapes in the composition. This was a painting about Robert Rauschenberg (Bob) and Darryl. Darryl’s art is very personal. It made me wonder if I should lose the thought of taking nude shots with this beautifully sentimental work of art. But the idea persisted and I did not believe that I was thinking anything disrespectful. So one night towards the end of my visit, I woke up just before 3 a.m. and went to work, careful not to disturb the other occupant in the house. I was back in bed by 4 a.m. I hope you enjoy this image, but more: I wish you truly beautiful experiences from each day forward. 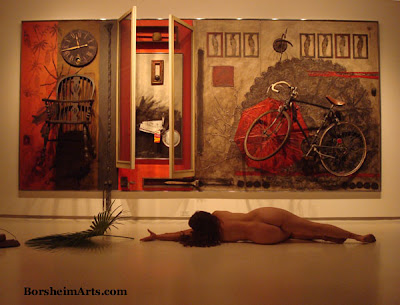 Links to the other New Year’s Eve posts:

Cari Amici (Dear Friends),
I must admit that I really enjoy living out in the country, even if I prefer easy access to the city. It is so beautiful living in the hills, with views of distant snow-capped mountains. This is Tuscany. However, I have not yet made friends with my local collina (hill). I do love her when I leave the house. The way to go anywhere is basically … down. But after a long day or a fun evening out, she presents the opposite side of her coin and I find it difficult to ride my bike UP her lovely lines. 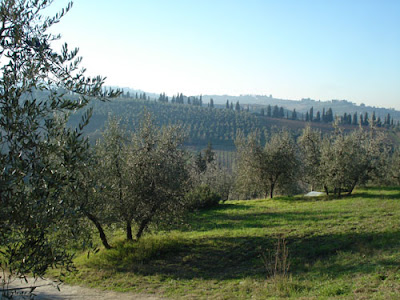 When I was a child of about 12, I think, I remember the very first day that I ate an entire Big Mac burger. I also remember another day in which I finished the entire can of pop (‘Soda’ or ‘Coke’ to some people). I felt SO proud! We often remember our “firsts.” And so I am looking forward to my new challenge of this collina. Unlike a Big Mac or a soda pop, this hill will make me a stronger and healthier person for tackling her!

The first image here is one of the lovely scenes I get to view on my way home. The second is a picture of my bike -- a gift from a friend. I took the image of my bike on Christmas morning and you may see one bag of artwork going with me on the ground beside the bike rack. I parked there and rode the Tramvia to get to the train station since I went to visit a friend in another city for the holiday. 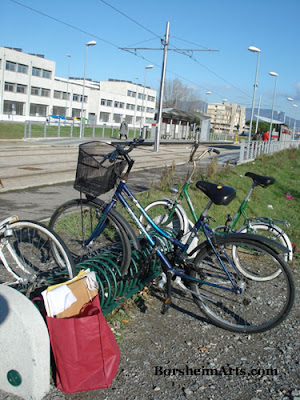 And on another topic. I am fairly convinced that today was the second time I was way overcharged for something because I am not yet a savvy foreigner. In a small mercato, I bought two lemons (well, actually, one lemon and one small citron [cedra in Italian], a lemon-like fruit that is used to make the famous limoncello liquor down on the Amalfi Coast of Italy). I was charged 1.50 euros! [That is currently about $1.93.] I thought the price high, especially after he asked me if the price was ok (and I was remembering one half of that illustration by Norman Rockwell in which the merchant has one finger pushing down on the scale, see below). All doubt was removed when a woman nearby remarked, “Buon prezzo!” (A good price!) I was pretty sure that was sarcasm and a joke between them. None of the other customers heard this sort of comment.

The other time I thought I overpaid was when I purchased a new bike pump recently for 20 euros. I felt that was way too much, but since I had previously tried the two pumps that were in my current home without success; the woman at the bike shop had just put air on both tires for free; and I wanted no problems during the holidays when I suspected that the stores might be more difficult to access, I paid it. Besides, I am not in a habit of arguing about something when I really do not know the facts. And in a free market, there is the reality that something is worth what someone is willing to pay for it. Enjoy the Rockwell! 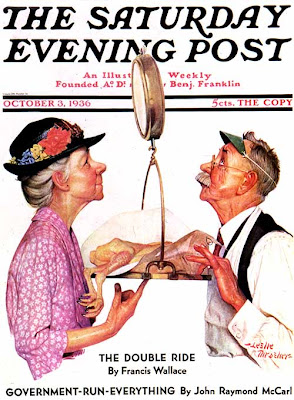 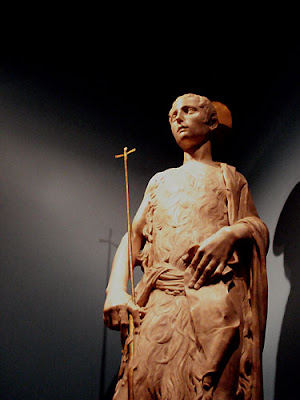 Cari Amici (Dear Friends),
Last night all of the state-run museums in Italy were free to enter as they stayed open late. So, after enjoying a wonderful aperitivo with a few friends in a cool place in Piazza Santo Spirito in Florence, we found ourselves staring at the long line in front of the Uffizi Gallery. It should have come as no surprise that everyone apparently had the same idea.

My friend Simone, one of my “character” friends who is always good for a laugh and often a dirty joke or two, suggested that the line would move fast and we should wait in it. But we had passed the Palazzo Pitti on the way over and noticed there was no line there. Both locations have so much to see, so it was a no-brainer to go there instead.

Well, we were in luck. The Pitti was having a very special exhibit that included works by so many of the greats and they had hand-picked these pieces from the Uffizi, Bargello, and other big name museums. So, we got to be close enough to touch a Botticelli, Michelangelo, Cellini, Donatello, and so many other names that I can only recognize them, rarely call them to mind. Such is my problem with labels. We were there for almost three hours until they began to close around 11 p.m. It was so cool to be inside the Pitti Palace that late at night! What views from the windows!

And while I was not supposed to take photos, since I do not use a flash, I follow that naughty guideline of “It is better to ask forgiveness than permission.” Mind you, this “rule” does not fit for all kinds of rule-breaking. So, I want to share with you some of the images that I took last night since I went to the effort and all . . .

And in closing, I just want to share that it is almost an overwhelming experience to be in a space in which you walk on design, look up at the ceiling for marvelous art, and then have the walls to compete for your attention! In fact, when the Italians put on a temporary exhibit, they erect colored walls to stand IN FRONT OF their decorated walls. It is bizarre how rich this country is with aesthetic and sensual experiences! 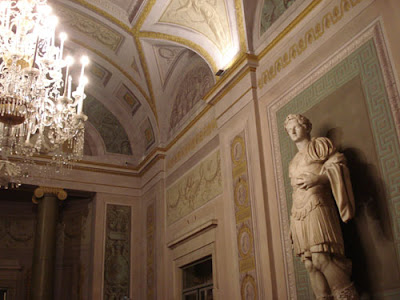 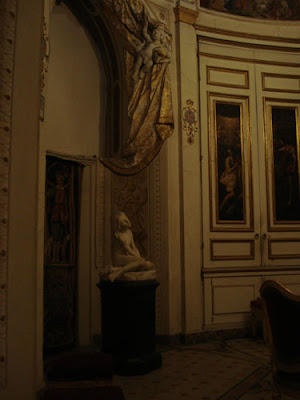 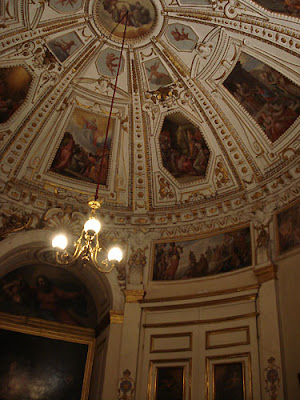 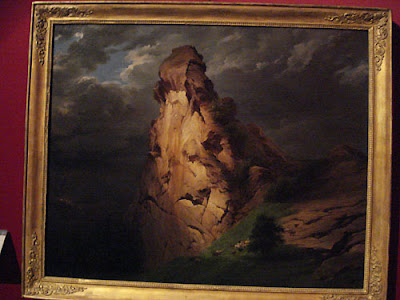 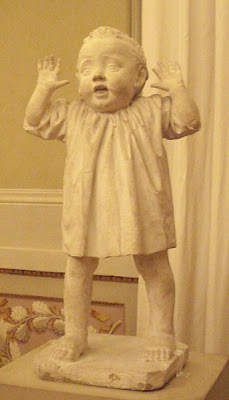 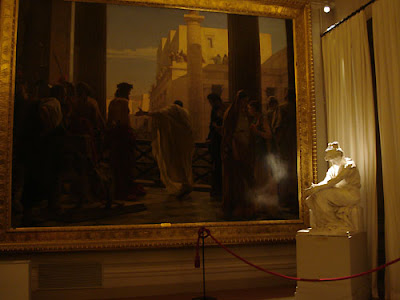 And I wanted to thank Linda Bell Brighton for featuring my charcoal and pastel (and SOLD) drawing “Tuscan Vista” on her blog Secrets of How to Write a Book. In a possibly strange coincidence, she also spoke about a quote from William Arthur Ward: “If you can imagine it, you can achieve it; if you can dream it, you can become it.” This made an impression on me as a young child (it was on the cover of a diary that I received one year for my birthday) and I used it as the basis of a speech I gave during my high school graduation.