Abstraction of the Real Figure 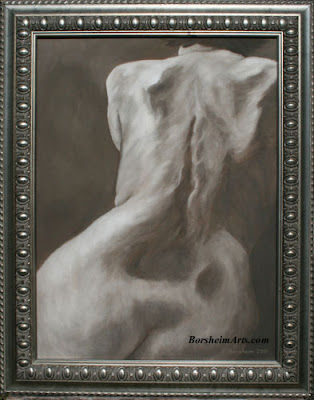 Cari Amici (Dear Friends),
It is sometimes a strange thing to understand -- this getting to realism in art through abstraction. The idea basically is that the artist is not just copying from a model. She is creating a design based on what she sees in the model. I want to capture a gesture, for gesture is a physical expression of a thought or idea.

The following oil painting “Neela” is one of my favorites of my early paintings from life. I cannot believe it is still in my collection, but then I usually keep it in my home for my own enjoyment. This is an older work and therefore quite affordable.

Neela, the model, was sitting and leaning forward a bit as she read a book during her pose time. I often enjoy working on the extreme edges of the model room, as well as working in the shadows with backlighting. And I love backs. You may see here that even if you can recognize this image as a woman’s back, it is really made up of abstract shapes of light and dark. The triangles of the shoulder blades give you an idea of symmetry in the anatomy, yet are not exact repeats of form. You may enjoy the circular shapes, the pointier ones, and hopefully the long swirling dark shape that widens as it gets closer to its bottom and denotes most of the woman’s spine.

The cool thing about this process is that one can achieve a believable human figure that does not look like a photograph. I hope that you enjoy “Neela.”

Posted by Kelly Borsheim Artist at 10:03 AM No comments:

I have been struggling this week as I try to get adjusted to my new life here in Florence, Italy. I have returned to the Angel Academy of Art to finish what I started years ago -- learning to improve my understanding of painting, especially the chemistry of painting. I left three years ago because -- and I am embarrassed to admit this -- another student was making me very uncomfortable in school and I could not get it to stop. I decided to leave the school, postponing my own education until this person had finished and gone. It was not difficult since I needed to continue to grow my own art career anyway.

My work moved in a slightly different direction in this period and of course, when I was back in Texas, I focused on my stone and bronze sculpture. I recently told Maestro John Angel and Jered Woznicki (my instructors at Angel) that I was nervous about starting up again because -- to my shame -- I had not even done a life drawing for over a year and a half (except for one 3-hour session with a friend).

Sometimes it is difficult to learn something when you think you already know something about it.

Being aware of this, as well as having watched other older students come in and flounder with their egos a bit, I really wanted to do as Maestro John Angel suggested, “Relax and it will come.” I wanted to learn the process thoroughly and it was important to “get it” early on so that I could “own” it and then be free to learn about what comes next. This was my mindset as I began to paint the figure in front of me. We were to use a medium-sized house paintbrush and wash in a solid shape on our canvases that matched the gesture of the model. The idea was to think in terms of FORM and MASS vs. outlines.

Then we were to add the construct over our massed-in shape . . . simple lines that placed the parts of the figure (head, limbs, etc.) where they would ultimately go, without actually drawing those parts. This takes time because it is the foundation of the entire painting. It is not enough to have the proportions correct. One must find the energy in the piece at this early stage. Otherwise, no matter how technically proficient the painting is rendered, it will be dull.

Once you are happy with this, start to articulate those construct lines. This means that you will take a smaller brush and create the outer lines of the abstract shapes that will become the figure. For example, the leg has specific edges that show off various muscles and joints. These edges will all have their own slopes and lengths and will relate to all the other parts in a particular way. Once the articulation is done to satisfaction, the artist can then design the shadow shapes (vs. light shapes). This is the start of the tonal work that will define the masses.

I hope this makes sense. Anyway, I do not usually work quickly. I am horrible at measuring things since I have a sort of impatience about being that tight … or maybe organized. Try as I might, I rarely measure the same thing twice and arrive at the same number. (Is that not related to the famous quote about the “definition of insanity”?)

So, I was VERY surprised when I found myself happy with my proportions on the canvas! I could hardly believe my luck! I checked and cross-checked, comparing various widths and heights, even diagonals (since I see better in triangles), trying desperately to find a relationship between shapes that did not match those I saw in the model. I really wanted to make sure that I did each stage SEPARATELY and that I understood the process that I came here to learn. And I felt that I was doing things well. So, what was the problem?

I did not believe that I could do that. But then, during the model break, I looked at the works of the other students who had more experience at this than I do. And I was further along the process than they were. I have never been particularly competitive (except with myself) and thus, I do not look at the work of others in order to decide how my work compares. But in this case, I knew that some things take time and we work within a system. The teachers know how to pace the class, despite some students working at different speeds. I was too far ahead and I lost confidence.

When Maestro returned to the room, I asked him if it was too soon for me to be drawing the shadow shapes. He said, “Yes, you have done it wrong.” I wanted to argue, “But you have not even looked at my canvas and now you are on the other side of the studio!” But I rarely argue something if I know that I do not have all of the information. When I am drawing or creating in any medium, I am not often aware of what others are doing and where they are looking. How did I know whether or not he saw the work I was doing earlier?

Frustrated, I went back to my canvas and wiped out all of my lines, returning to the simple mass I had painted in the beginning. I thought that was the fastest way to let go of my ego and learn the process the right way. In hindsight, I wish that I had waited on that. Once the model was back in position, Maestro came over to my easel and described each step again. And I kid you not, I believed in every ounce of my entire body that I had done exactly as he demonstrated! Even the measurement points that he said I must consider were absolutely the same ones that I HAD considered and measured! Now, I really felt frustrated because he kept saying that I had done it wrong because no one gets it right on the first try. But for the life of me, I still had no clue where I took the wrong turn.

After class and close to tears (I HATE that about myself since it makes me look so weak when I long ago discovered that I must release that energy somehow and prefer it be in a peaceful manner), I again asked Maestro to tell me what I had done wrong. So then he said, “Constructs. You have never been good at making the constructs. No one gets that right on the first try.”

That night at home, a friend called to see how I was doing in school. I must admit that I got all worked up again as I relived my frustration. He cut me off with his hearty laugh. I was not amused. What’s he on about? He said, “You . . . struggle? If anyone would get it right the first time, it would be you!”

Hmmm. Now I knew that Maestro was right (sorry, Si). I had done it all wrong, but I would need to figure it out on my own. That meant that I needed to DO more … more constructs, in this case. In that instant, I had a flashback of the time that my friend Vasily Fedorouk yelled at me in front of our stone carving students. He apologized to me in private that night as we stood outside under the stars. But having understood where he was coming from and that, in effect, his gruffness showed his affection and passion for art, I told him that, “My grandmothers love everything (artwise) that I do. But they will never make me a better artist. You will, and so we are ok.” My friend is perhaps too often my cheerleader and I need to figure this stuff out.

The image below is of the first step in this painting process taught at Angel. [I still had corrections to make then.] Unfortunately, I could not document the other steps I did that day because my digital camera is dying. I really need to break down and do the research and get another camera quickly. 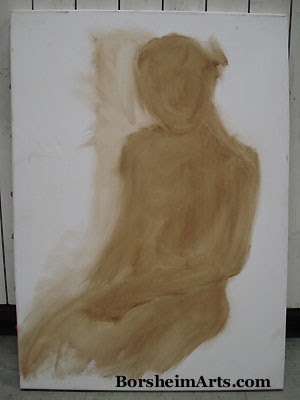 Posted by Kelly Borsheim Artist at 11:04 AM No comments: