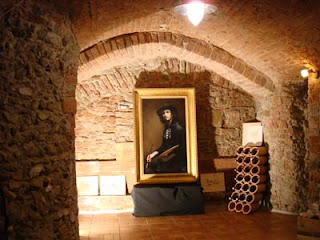 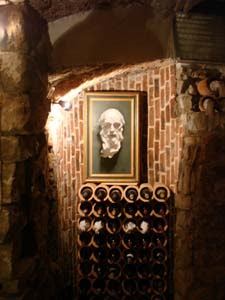 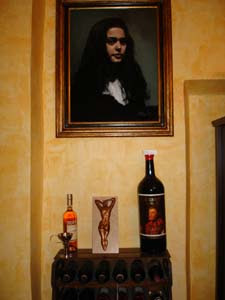 I attended a fun art opening for my friend Letitia "Tish" Lowe this past Thursday night.
It was held at Enoteca Pozzo Divino (In Italian, most adjectives follow the noun. pozzo divino = 'Divine Well' but also is a nice play: if Pozzo di Vino,
it would mean 'well of wine'). This beautiful building offers wine tasting, olive oil, and balsamic vinegar: Italian staples.
Owner Pino and manager Ernie (Ernesto) are gracious hosts and you should love to visit this place on
Via Ghibellina 144R (R in the address means "red" and denotes a business address), across from the famous Teatro Verdi in Florence, Italy.

Tish had many paintings on exhibit that evening, some of which were portraits of fellow artists. I include here her
rather large and dynamic portrait of Jason. He was on display downstairs in the wine cellar. Is this not just an exquisite setting for beautiful art? 'Love the brick and wine, although
too well-lit to be considered an Edgar Allen Poe setting.
Another portrait is of another artist here in Firenze - Theresa. This image also shows my bronze "Ten" on exhibit.

So, come to Firenze and enjoy good wine, tasty oils and vinegars, and classical art. 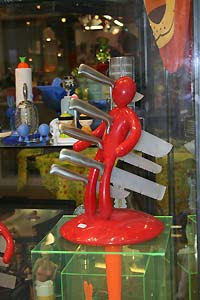 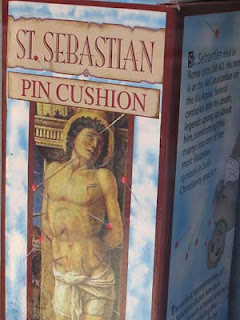 Now, I have been known to exhibit some tasteless humor, but . . . While the knife holder in the little red man made me laugh in an uncomfortable way, I must admit that I was shocked a bit at the St. Sebastian Pin Cushion.

Martyrdom is funny? Or only to seamstresses? Or acupuncturists? Or tacky tourists?

Both of these images were taken of items for sale in shop windows in Florence, Italy.
Posted by Kelly Borsheim Artist at 10:05 PM No comments: 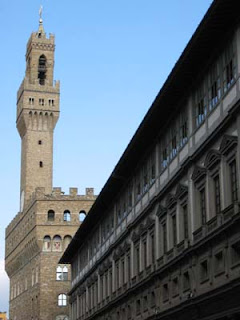 This past weekend (29-30 Settembre) was European Heritage Weekend. This meant, in Firenze anyway, that the state museums were free to enter. While I spent my Saturday morning at Steve Armes' landscape workshop in Fiesole and the afternoon painting in my room, I was up rather early on Sunday morning to stand in line at the famous Galleria d'Uffizi.

There was a photography exhibit on the first floor from World War II. On June 10, 1940, Italy entered the war and
immediately began to make plans to protect its artworks. The first step was to move all that could be moved out of the
city of Florence into the neighboring countryside areas that were considered to be less of a target. What was not able to be moved were artworks such as frescoes in churches, carved portals, fountains, tombs, and, of course, large sculptures, such as Michelangelo's 'David.'

The exhibit was titled "Protezione dell opere d'arte" (opera = work, singular; opere d'arte = works of art). There were originally more than 5000 black and white photographs taken from 1940 to 1945 by the personnel of the Gabinetto Fotografico. However, many of them were lost in the great flood of 1966. (Markers showing the water levels that November can be seen in various points around the Renaissance city.)

I was especially intrigued by a photograph labeled "Firenze Galleria dell' Accademia. Lavori di protezione antiaerea del David di Michelangelo 25 gennaio 1943" In January of 1943,'David' was first wrapped up in place at the Accademia and then enclosed in a tall brick cylinder with a continuous dome cap (almost shaped like a grain storage "bullet" you see on American farms). This same "false wall" system was used to fully surround frescoe paintings and other substantial works of art in Florence.

On 30 July 1944, an evacuation of the city of Firenze / Florence around the bridges over the Arno River was ordered. But on the morning (night) of 4 August, the Germans bombed and destroyed all bridges, except the Ponte Vecchio. Liberation came later that month. However, there were four sculptures on the Ponte di Santa Trinita, representing each of the seasons, that were destroyed in the bombings. While most of the sculpture parts were found relatively quickly and restored, it was not until 7 October 1961 that the head of "Spring" (primavera) was finally found at the bottom on the Arno during some river maintenance!

If you would like to read about the flood of 1966, please visit:
4 November 2006 Newsletter
Posted by Kelly Borsheim Artist at 10:43 PM No comments: 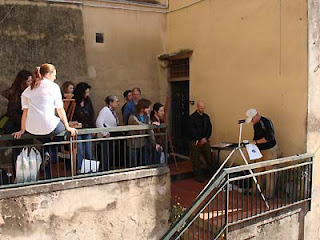 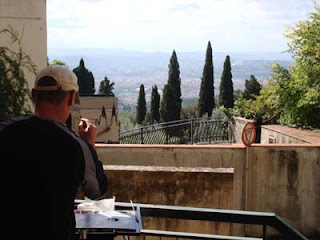 American landscape artist Steve Armes comes to Italia to paint as often as possible. He had also made friends via the Internet with my friend Dorian Iten from Switzerland. Anyway, Dorian invited several of us artists here in Firenze to attend a free workshop that Steve generously offered this past Saturday. I know almost nothing first-hand about painting landscapes, so this was a wonderful opportunity.

We all met up at Fiesole, the last stop on l'autobus # 7, up the mountain from Firenze. After showing us some of his work, giving us an overview of materials and how to prep the board to paint on, and discussing his approach, Steve led us around a corner not too far away from the bus stop to an abandoned building that apparently is a great place to drink beer and then smash the glass bottles.

But Steve set up his easel and, under changing light conditions on this cloudy day, did a great demonstration for a couple of hours before several of my friends set up theirs and began to work. I must confess that while I enjoyed that morning, I was itching to get home to my figure work and left around 13:00 to return to Firenze. A nap was in my future as well. I do hope to be showing some of my current projects soon . . .

If you would like to see some of Steve's finished works or learn more about him, visit: stevearmes.com

If you would like to see Dorian's site, check out:
www.dorian-iten.com
Posted by Kelly Borsheim Artist at 7:38 PM No comments: