Cari Amici (Dear Friends),
I spend half of my weekdays working with an art model named Federica. She is really cute and a trooper to model in the winter time. Like my apartment here in Florence, Italy, sometimes the old doors and windows do not fully CLOSE! The studio now has a piece of glass missing as someone tried to close an unreachable window all the way. Using a ladder and climbing as high as I could, I used a stick today to “secure” a piece of cardboard over part of the window. It was a horrible fix (the cardboard I found was not large enough), but as Federica and I agreed, “Meglio di niente” (better than nothing).

I include here some of my daily snapshots from some time ago to show you a bit of the process. I am painting a grisaille, but instead of using black and white, I am painting with Titanium White (Michael Harding brand) and Rembrandt’s Van Dyke Brown. It makes a warmer gray. I am painting on an primed linen (I think) canvas with a loose gray campitura (starting background color), tacked onto 80 x 40 cm stretcher bars.

Image 1: Blocking-in the mass of the figure, trying to capture the gesture in the form. 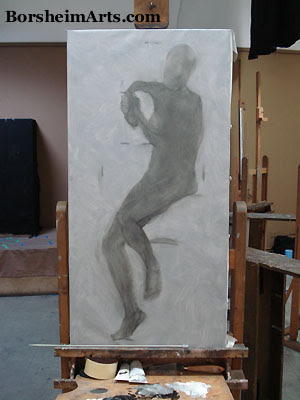 Image 2: I have now drawn in my contour lines of the figure’s main parts, the background props, and have even designed my shadow shapes and colored them in (except for the face). The face took more time because of the more intricate shapes that I needed to design. I say design because the goal is not to “copy” the live model in front of me, but to use her as an inspiration or reference for my own creation. 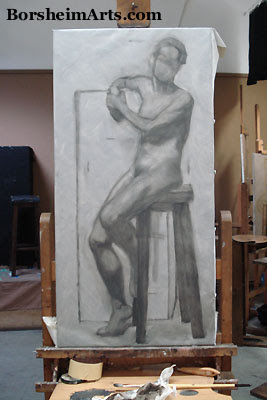 Image 3: Now the face. I am amused by this because this face reminds me of my cousin Carrie a bit. And NOT the model. We all tend to draw ourselves [family being a part of the same face(s) that we see most often]. 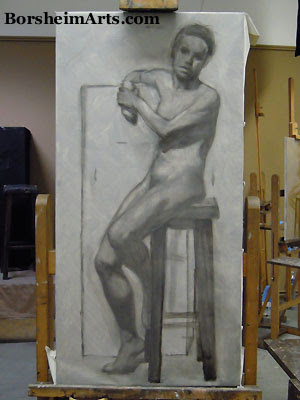 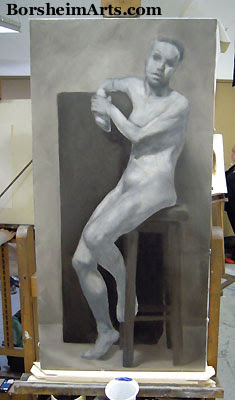 Image 5: I love this image! I added an averaged light tone to the figure in light. Now you may truly understand how my figure is really only a pattern of abstracted shapes! Federica had just gotten her hair cut into a new do – and it is really cool on her! 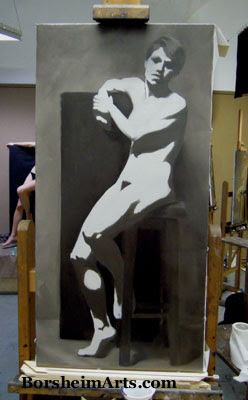 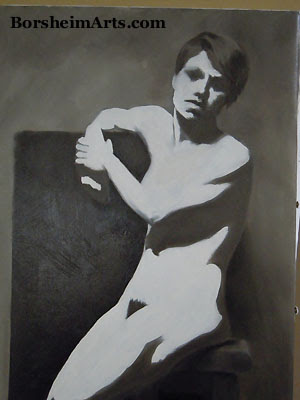 Image 7: Here you can see that I have started creating the “Big Form Modeling” to change my 2-tone design into something that begins to look three-dimensional. I have always been a “butt and legs man” so I tend to start with the pelvis and work my way down. 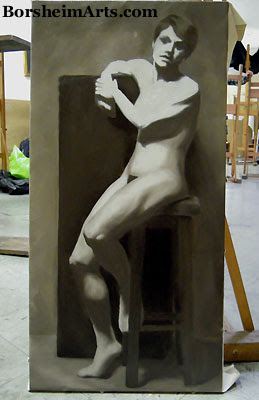 Posted by Kelly Borsheim Artist at 11:59 PM No comments: