I recently returned from the annual street painting competition in southern Italy. Nocera Superiore is a small city up the mountain from Salerno and the Amalfi Coast. I wrote about some of my experiences last year at this concorso dei madonnari (madonnari = street painters in Italian). This year was a bit different.

There was still the long train ride down, meaning that although I was up until 2 am, as is my usual, I rose (but I am pretty sure that I did not shine) around 5 am to finish packing and get to the stazione. Dozing off occasionally on the train was not enough and so I took a little nap shortly after arriving in Nocera Superiore. This year, there were over 100 artists - street painters from Mexico, Holland, Italy, and more.

The streets of this Italian town have glass embedded in them. Pastels and chalk do not stick to glass and thus, we must prepare the street to “give it some tooth.” This is not unlike a fine art painter preparing the surface of a canvas or board. Some of the real pros get quite elaborate with this, even coloring their surfaces like a campitura. Like many others, I used Coca-Cola: the kind with sugar. I cannot think of a better use of this soda water than pouring it out on the street!

The weather had cleared up and most of us, with the exception of my eager colleague Wilson, got started after the dinner provided by the festival organizers. In order, the images I include here are of madonnari: Toto, a famous streetpainter of over 50 years with a very Dante- or Leonardo da Vinci-style profile; Tomo, a Japanese streetpainter who resides in Florence; Wilson from Columbia; yours truly; and Taka, another Japanese madonnaro. There were many more artists in my group from Florence, Italy, but these were the artists who worked in spaces closest to mine. 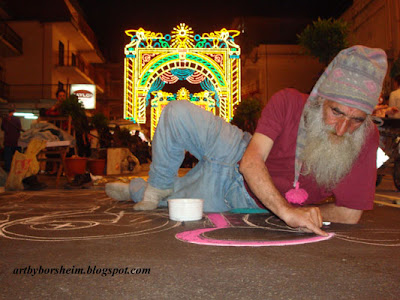 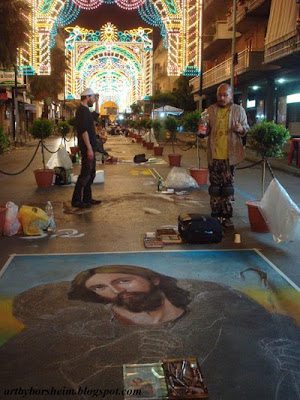 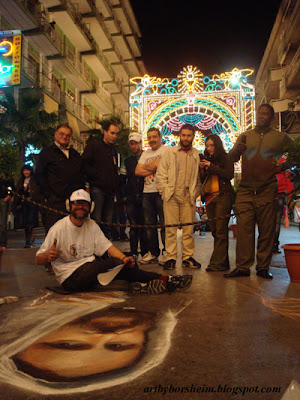 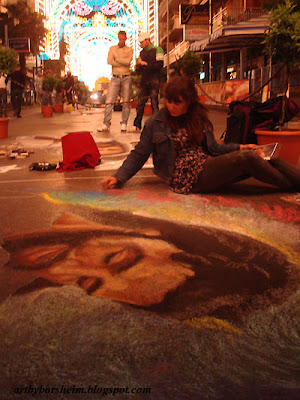 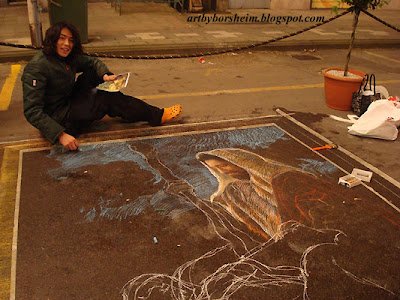 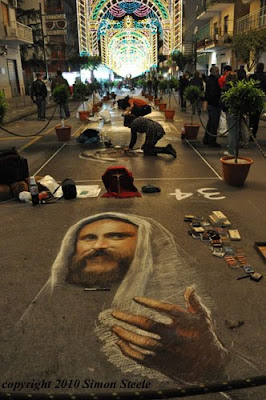 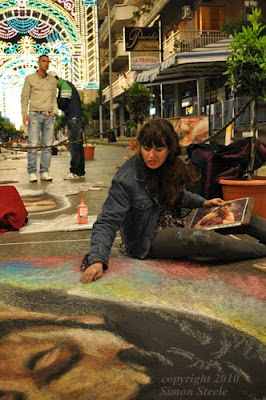 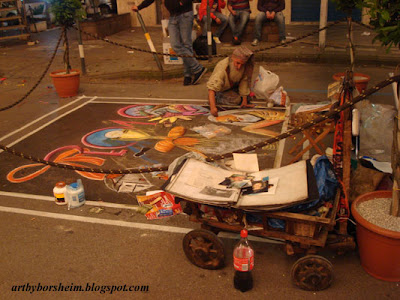 Taka’s shoes made funny noises as they ripped away from a very tacky surface and we had some laughs in the middle of the night about that. I was so tired that I called it a night around 3 am, thinking that I might be more efficient after about 3 more hours of sleep. On my way to my provided bed, I photographed this bronze figurative sculpture of a priest holding glow-in-the-dark rosaries and sporting a neon halo. Fresh lilies were put at his feet daily, at least while I was in Nocera. 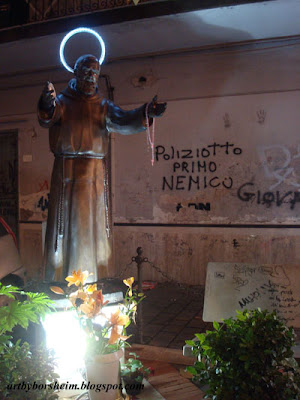 When my alarm went off around 6 am, it was pouring rain outside. Quite frankly, I was happy to have a reason to stay in bed. However, it had stopped by about 7:30 am and many of my colleagues had gotten up to see what was the situation. Not so good: many artists lost their protective plastic sheets in the strong winds. And on the other hand, those who had thoroughly taped all edges of their plastic to the street still had water underneath the plastic. Many drawings were ruined and some became beautifully ghostlike. As with the case of the black and white design of an image of Christ, I actually felt that the crinkles of air in the plastic resembled cracks and were an interesting addition to the artwork underneath. 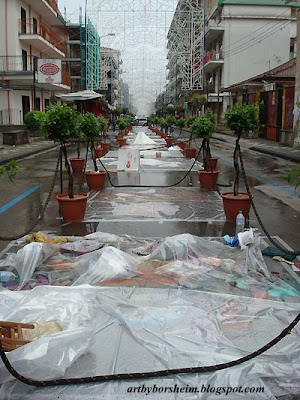 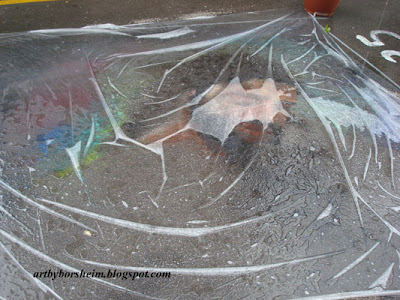 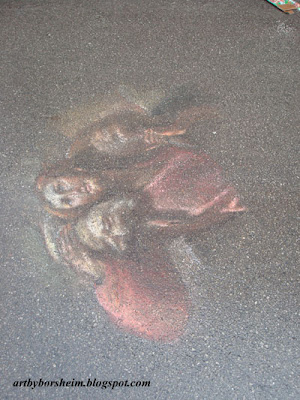 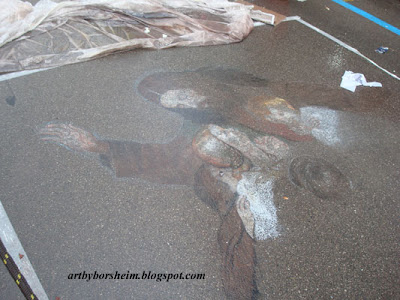 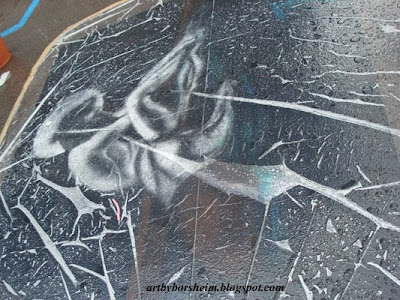 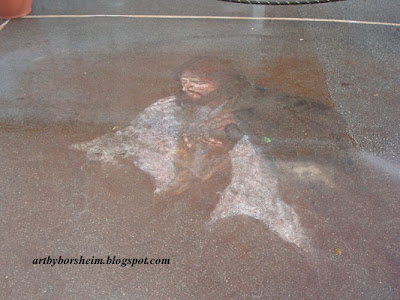 The weather alternated between short bouts of dumping rain and wee bits of sunshine, but ultimately once our deadline of noon passed, it was apparent that even if we waited to finish on Sunday, it would all be in vain. I took another snapshot of part of the church as we all checked out, then asked a friend to take this image of fellow street painters Giovanna and Angela with me where we hung out for breakfast. 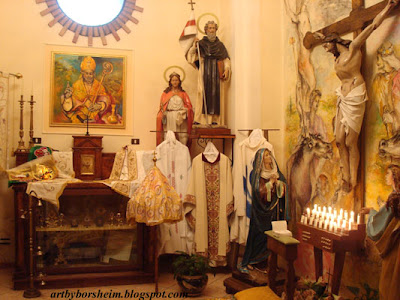 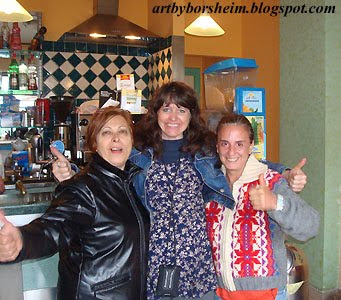 After another nap and a wonderfully warm lunch of ravioli with gnocchi followed by slices of meat, peas (which I left on the plate as I have done since babyhood), and French fries, it was time to head to Rome. On the way to the stazione, I took this image of some high school kids using their plastic as a “fort” and under it they were drawing, socializing, and talking on their cell phones in the drizzly weather. Pretty cool, these budding artists! 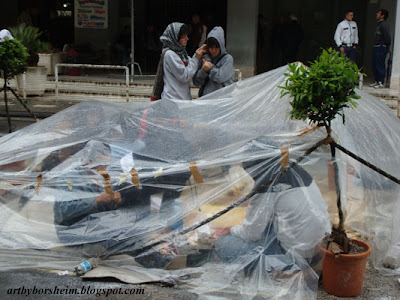 I wanted to see the Caravaggio exhibit in Roma, but having changed my plans at the last minute after Nocera’s event and having no reservations (and arriving in Roma just before midnight), I could not find ANY available beds. It was a Saturday night, which turned out to be Rome’s “Notte Bianca” and packed with tourists. The wet weather made a “park visit” (homeless-style sleeping) impossible. So, I amused myself in some bar with dancing and a bizarre movie until I could get on the 5:57 a.m. train back to Florence. What a weekend! It was sad that the rain destroyed this year’s streetpainting festival, but that is the way it goes sometimes.