Ciao! Preparing for an art exhibit is often stressful. It was so in my recent case while preparing for my first solo art exhibit in Florence, Italy. In my case, I was trying to create too many works in too short a time. And I do not see the point in putting an artwork in a frame if she is just not ready to be seen yet. Canceling any semblance of a social life and working lots of extra hours is one thing. Lowering my standards is quite another.

In the end, I removed two intended drawings from my exhibit. I will finish them as soon as I slow down some more. But it was also during this period that I met Lili Baehr. Her daughter Evy is studying photography in Florence and Lili had a dream to come here, too. She became one of my blog readers and rented the best apartment that I have seen in Florence to date. We have connected off and on while her month-long visit is ongoing. I met her friends Lauren and Shirley, and spent several occasions with her sister Lucrecia. 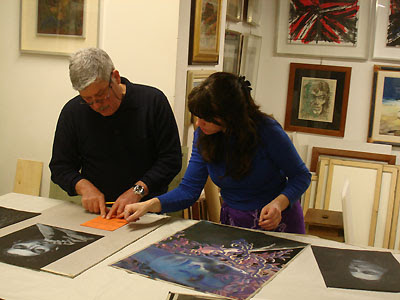 Lili and Lucrecia walked all the way out of the central part of Florence to where I live, only to catch me rushing about. They got a quick tour of my working space and then graciously helped me carry artworks to my framer, Massimo Fossi on Via della Pergola. 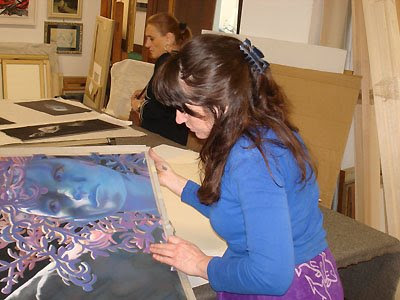 So, how about that? Go to meet an artist and you get put to work immediately! Lili thought to take these images of me with Massimo. And I was pleased that they loved my drawings. “Enough!” seemed to draw Lili’s attention again and again. I am grateful that my work has gotten so much high praise (from Lili and Lucrecia, as well as others since that day). Thank you so much. 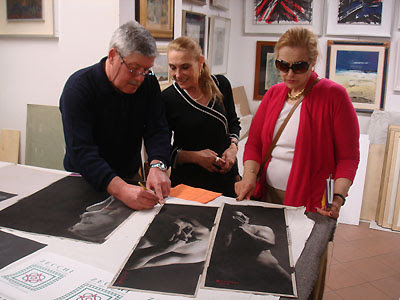 Also, an interesting Article: Life, The Brain, and Longevity: 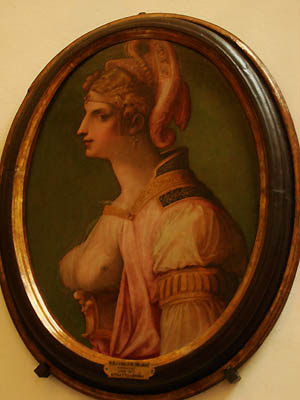 Today marks the last day of Cultural Week, when all of the state-run museums in Italy are free to enter. Because I have not slowed down since my exhibit opened ten days ago, I did not find out about this until it was already happening. I have delayed most of my schedule so that I could visit as many museums in Florence as possible.

I wanted to head over to the Boboli Gardens (having spent over five hours in the Palazzo Pitti two or three days ago), but it is raining now. Work calls and my laptop is full, so I cannot download more images until I remove lots from my files.

So, I will just leave you with a little bit of humor. This first image I took of a painting of walleyed boobs. I often tell my anatomy students that breasts do NOT consist of a grapefruit cut in half and glued onto the body. And they are NOT headlights, beaming straight ahead, since they lie on the curving egg-shaped form of the rib cage. So, perhaps you can see why I would enjoy this image of an artist taking the opposite extreme.

This painting titled “Portrait of a Woman” is housed in the Accademia in Florence, Italy, not too far from the famous “David” marble sculpture by Michelangelo. The label says something about Ghirlandaio, Michelangelo’s original teacher, but I cannot make it out and it could be from his school, not the maestro himself. 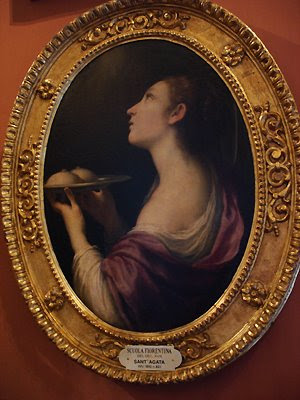 Or how about this one titled “Sant’Agata” by the Scuola Fiorentina, Del Sec. XVII and currently on exhibit in the Pitti Palace? I do not know the story of this particular saint, but “Boobs on a Platter” would be a working title for me. And who said that everything has already been done before? Hmmmm.

La Galleria dell’Accademia also houses many of Florence’s original plaster (gesso) sculptures that were later translated into marble. I love the expression of sorrow of this next artwork and decided that she was perfect for this blog post as she intently gazes forward (towards the “Portrait of a Woman”?) with much . . . empathy.

I was thrilled when a man asked me if I spoke French and could explain to him what the black dots on all of these gessos were. They are, in fact, measuring points. You will see them on all of the high points in a sculpture. The original gesso is placed on a board that corresponds to the proportions of the marble block to be carved. From a fixed point (such as a corner), the artisans will measure height, width, and depth to the black dot on the plaster sculpture and drill into the marble just short of the corresponding position. Once most of the marble is removed, the sculptor can recreate the art with better accuracy.

More about my museum experiences later. A dopo . . . 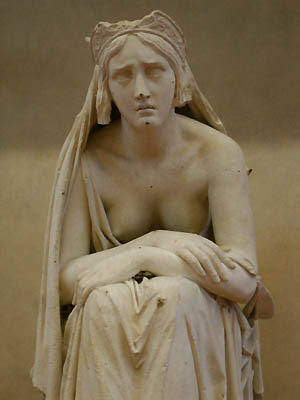