Oh boy, did I screw up! I meant to write this post two days ago… you ARE invited!

Over a baker’s dozen of sculptors with even more art will be on hand for this event out in the sculpture gardens and grounds of my friends Philip and Michelle Hoggatt. They are two of the kindest, most generous people you could ever meet and they host this annual event for a local charity.

Plus I will be introducing my newest marble carving “Back to Back” – yep, the one that you have watched getting carved here on occasional blog posts. This marble sculpture will be entered into the Sculpture Challenge. Each artist is allowed to enter one piece and those attending the event get to vote on their favored works. It is a friendly competition, but the real goal is to help find homes for puppies of any age and needed funds for the shelter.

I will also have a few selected smaller works on exhibit and am just happy to be forced from a semi-seclusion. Do not get me wrong – I love to be alone and it is necessary for my process, but everyone needs a balance. It will be fun to connect with old friends and meet some new people.

Please come on out if you can (and if you have not received this too late): 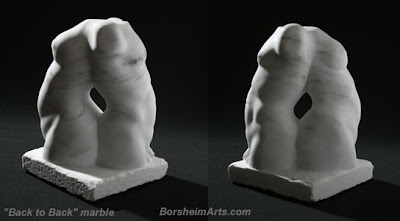 I keep thinking about art design, specifically creating an emotional feeling with just two tones. You have heard me talk about Notan before – a Japanese design concept that uses just black and white to create a composition.

I wanted to illustrate this idea using a painting by the British landscape artist JMW Turner (23 April 1775 - 19 December 1851).

Due to a lack of time, I worked backwards and took a black and white image of Turner’s painting into Photoshop. I then greatly increased the contrast and a little bit the brightness until I had a decent pattern of mostly white and black.

Now, do not cheat and read to the end, but instead look at this image and take note of any feelings that come to mind when you look at this arrangement of black and white shapes. 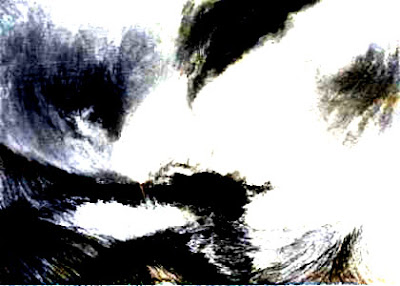 As I argued in my recent newsletter, I do not see the above image as art. I see it as a concept expressed graphically, but it needs more to really communicate the idea successfully. We visual artists have a visual language and can try to make you feel something using our alphabet that consists of lines, tones, shapes/form, texture, and color. If Turner were a writer, this would be his rough draft, or perhaps the equivalent of an idea scribbled down onto a napkin at a café. More work needs to be done for the viewer to understand what the author wishes to share.

This second image is a black and white version of the painting by JMW Turner. For me, the idea has been well developed here – enough for me to understand the power in the swirling shapes. 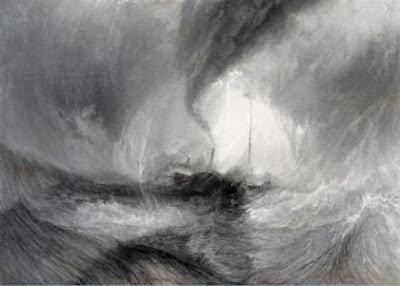 Finally, I give you the final painting in color. The idea has been fully expressed. I hope that this image stirs something inside you. I also hope that you can see a huge difference in the basic design vs. the finished artwork. Can you guess the title? 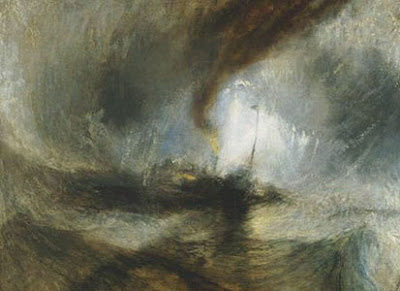 This painting is titled “Snowstorm” and was painted in oil on canvas by JMW Turner in 1842. This beaut is approximately 92 x 122 cm. If you would like to see more of Turner’s paintings, as well as a comparison to the canvases of Mark Rothko, please click here for my newsletter on the topic of “Art vs. Science” I also wrote about the color yellow in art . . . enjoy and thank you for your continued interest in this blog.

Posted by Kelly Borsheim Artist at 8:28 AM No comments: