This past Friday the 13th I attended a lecture on Leonardo da Vinci by the Maestro John Angel at the Angel Academy of Art in Florence, Italy. Perhaps it is horrible for me to say, but Leonardo has not interested me too much before. So I was a bit surprised at how much I enjoyed this lecture!

In his opening statements, I thought that the Maestro was brilliant to illustrate his basic premise with a recipe by Leonardo: that the most famous Renaissance man was curious and creative, but that his ideas rarely seemed to pan out.

This gesso sealant (for a painting canvas) recipe is written in one of Leonardo da Vinci’s manuscripts in Paris and is cited by Richter (R628):


One coat of mastic in white turps
Three coats of grappa (acqua vitae) and arsenic
One liberal coat of boiled linseed oil
One thick coat of white varnish, applied with a stick
When dry, wash the whole with urine.

I must say that the grappa and arsenic amused me, especially after seeing how some people drink here! As master painter John Angel pointed out, “Arsenic is not harmful to gesso, just pointless and very harmful to the painter.” But this type of thinking just might explain why Leonardo’s “Last Supper” (in Italian, “Il Cenacolo” or “L'Ultima Cena”) was already in need of repair during the artist’s own lifetime.

It was surprising to me that for such a famous artist who produced so few finished works, I saw several art pieces in John Angel’s lecture than I had never before seen. One that particularly caught my eye is one that the Maestro said that not everyone acknowledges as done by Leonardo. It is the “San Gennaro Angel” (pictured here), a sculpture in terra-cotta in a church in San Gennaro, just outside of Florence, Italy. The Maestro later e-mailed me for clarification:

“However, it looks like a Leonardo (based on the style of the drapery, etc.), and it seems unlikely that anybody else would have borrowed the style of a young unknown artist (at that point, nobody would have known his style). Its date fits with Verrocchio's Pistoia altarpiece, placing Leonardo in the area at that time (the late 1470s), and gelling with the need for him to get out of Florence for a time, in order to let the "backside game" scandal die down a bit. I have attached a jpg of the sculpture. It was proposed as a Leonardo in the 1990s, I think.”

“Playing the backside game” was how Leonardo referred to his penchant for 10-year-old boys. The scandal refers to the time that Leonardo, along with three others, was accused of sodomy. The charges were later dropped, perhaps because one of the other three was part of a rather powerful family.

Anyway, another point worth noting: It is strange that Leonardo da Vinci is so often referred to as a scientist, when he discovered no scientific principles. He is, however, a champion of the empirical method, preferring to collect his data from pure observation of nature vs. a manipulation of variables or basing his ideas off of the work of others.

Another story that I found a bit . . . non lo so . . . disturbing, curious, perhaps simply the yin yang of human behaviour? Anyway, apparently Leonardo became a familiar face in hospitals, entertaining and spending many hours with the old and the sick. And then, after they died, he would claim their bodies and dismember them for his personal anatomy studies.
And on that note, I am off to sleep . . .

Posted by Kelly Borsheim Artist at 12:14 AM 3 comments: 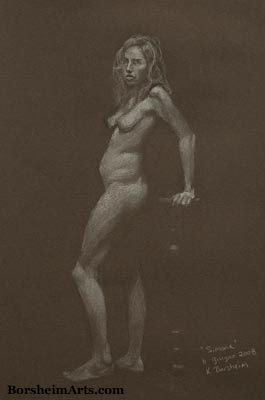 I am still playing with the exploration of shapes and the idea of light emerging from darkness. This next drawing I made on the 11th of June is of a new modella, Simona.

"Simona" sells for $125, plus $20 shipping.
She is drawn with a white pencil on dark grey sheet of Canson paper.
The figure is 34 cm tall (slightly more than 13 inches) x 20 cm (8 inches).
I would suggest framing her with a little more space around her than that.