Cari Amici (Dear Friends),
On the morning on 31 December, I read on a Facebook posting about Florence, Italy, that there was an Italian tradition for New Years: According to: Freya's Florence Tours - Freya Middleton: Don't forget to wear your red underwear to ring in the new year! Italians say it'll bring you luck in the coming year. Red wards off the malocchio (Evil Eye) and is a symbol of love, prosperity, and fertility... but it must be thrown away after New Year's Eve!

I was fortunate enough to have received four separate invitations for New Year’s Eve, each different in activity and energy. I wanted to try them all! But a girl only has so many hours in the day. Before bicycling into Scandicci to catch the Tramvia, I stopped in at my neighbor’s home. Giuliana had invited me to share dinner with her and her husband Renato. Their children all had other plans and I had told them that unless I could find a couch to sleep on in the city, I was not sure if I could go into central Florence for the huge casino (mess, chaos) that occurs there each New Year’s Eve. Everyone I knew was having guests.

But that day I received the invitation from a friend and decided to go into town. After expressing my regrets to Giuliana, she asked me to wait because she had a little gift for me. Imagine that! Can you imagine my surprised joy when I opened the wrapping and discovered a small pair of red panties! Oh, I was delighted! [My mother had guessed on Facebook that I would be going commando, so this was quite funny.] So, here is an image that Giuliana’s grandson Marco took of us. The image is not so happy as we worried about his ability to use the camera, but these are my sweet neighbors. 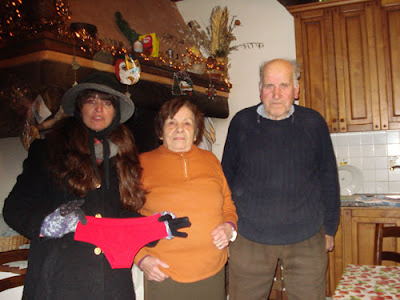 I roamed around in town until meeting up with my friend Jacopo at Giubbe Rosse, a famous café and artist hangout for at least a century. The café is situated off to one side of the famous Piazza della Repubblica and as I approached, I could see the band playing already on a stage set up in the square. Once inside, I met some new friends and saw some other people that Jacopo had introduced me to the week before. I have to say that I was still tickled by Giuliana’s sweetness that I enthusiastically pulled out of my backpack the red panties to show everyone at the table. Hearty and understanding laughs all around – I wondered later if “my momma raised me right” and was grateful that my friends did not think me too forward.

I had to leave them before I really wanted to because I was due at Susan’s flat. Once there, I went to put on my good luck charm. And so it went that the last night of the year was spent visiting wonderful people and roaming the streets of the city. I got kisses and vodka. I watched couples dancing together in the streets and people emptying their champagne and other boozy bottles before throwing them down into the streets, smashing the glass to pieces.

Loudly booming fireworks were going off all over the city and as I walked along the Oltrarno side of the river, I had this image in my mind that this must be a small sampling of what it must have been like when the Germans bombed the city back in World War II, destroying all of the bridges except the Ponte Vecchio. We always have yin and yang . . . we destroy with bombs and on this night, we celebrated with bombs, of sorts. 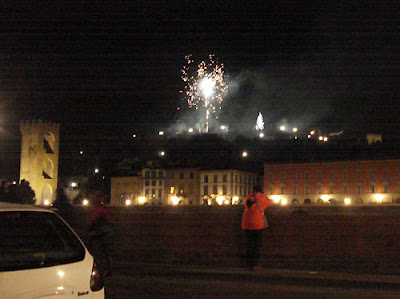 The following images were taken in Piazze della Signoria AFTER the year had changed over, perhaps around 1:30 a.m. since I was elsewhere at the hour of midnight. The orchestra playing was a new addition from other Capodanno celebrations that I have attended in Firenze. The musicians were positioned inside the Loggia dei Lanzi, among the famous stone and bronze sculptures. I suspect that was to protect them and their instruments -- even drunks here will have a strong sense of respect towards the art, if not each other. 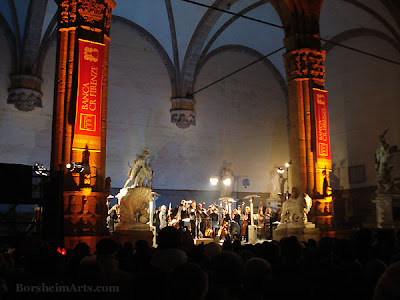 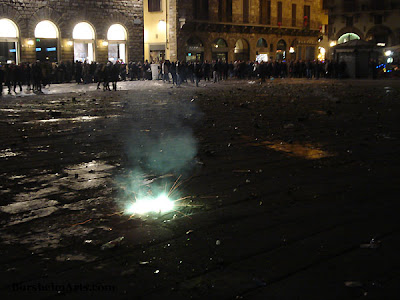 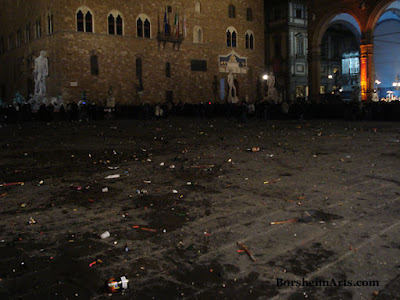 On the other hand, I am not sure what to make of this: an interpretation or disrespect? On Via Calimala where two of my street painting colleagues had created artworks earlier in the day, I thought that I saw Claudio’s Madonna crying. Well, she was, but because someone had spit on her face in order to give her this emotional response. 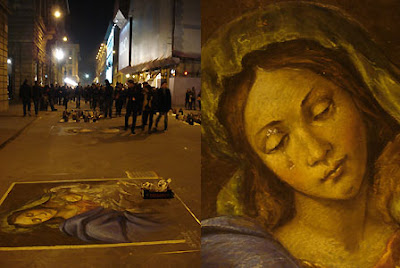 I did not wake until almost noon today. But I wanted to follow the Italian tradition to the full extent. This last image was taken of me right next to the Basilica di Santa Croce, moments before I put the red panties in the trash bin. Hours later, I returned to my home and went to give my auguris to Giuliana and her family, who were all finishing up their holiday dinner. I was invited to join in the meal and while enjoying a lovely afternoon with the entire family, I entertained them with my story about the fate of the red panties. Susanna laughed and said that it really is not necessary to disgard them in order to become “in fortuna,” I only needed to wash them! [Would one not do this anyway??? Where is the drama in that? Had I just insulted Giuliana?] They also agreed when I told them that my mother suggested that this tradition was created by those in the clothing business. So, Giuliana helped the local economy and I have my cherished memories. Happy 2012! 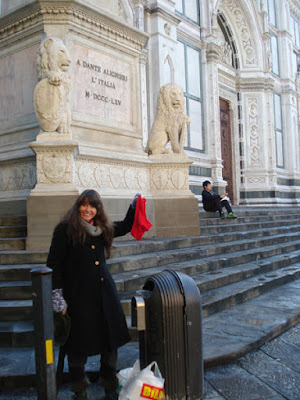