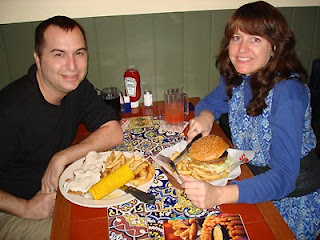 I had asked my friend Gregg Baethge if I could make him famous by putting him on my blog. Lol. Seems only fair that I follow-through. We had dinner the evening after Christmas at a Chili’s in Austin, Texas after I visited with “my kid” Rudy. Gregg, being a Texan, loves their chicken fried steak – lots of white gravy. I got a big ol’ burger, something I rarely search for in Italia. Gregg sells my art at The Home Retreat in downtown Austin. If you can, go by and say ‘hello’ to Gregg for me and do not forget to browse at all the wonderful and comfortable things there for your home. You might also run into one of the owners: Michael and Wini Graziano.
Posted by Kelly Borsheim Artist at 10:54 PM 2 comments: 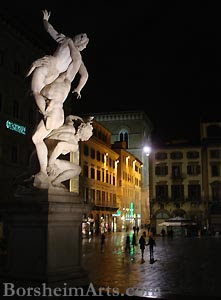 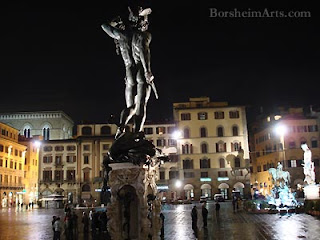 “Is there any doubt” (sorry, family joke, ha ha Dad) why a sculptor would be drawn to Florence, Italy? I hope you enjoy this second posted batch of images that I took on the evening of 4 Gennaio 2008 in Piazza della Signoria. What a beautiful piazza, this one where Frà Girolamo Savonarola was burned! Savonarola preached against “moral corruption” during the Italian Renaissance. He was executed on the very spot that his Bonfire of the Vanities was lit. The location is marked in Piazza della Signoria and it is odd to watch so many tourists step over the spot, seemingly unaware of its historical significance. 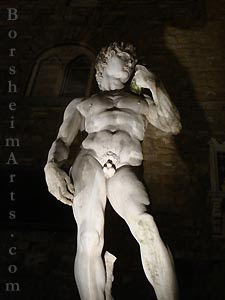 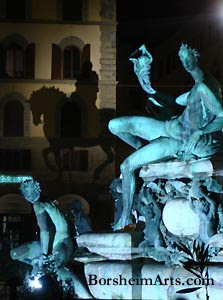 Posted by Kelly Borsheim Artist at 2:07 AM 2 comments: 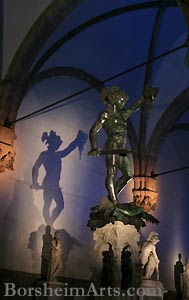 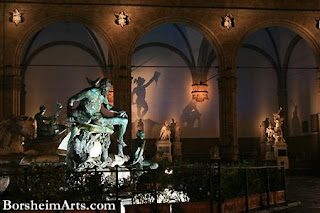 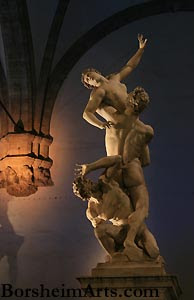 I have yet to see Florence, Italy’s Piazza della Signoria and the Loggia (that sounds so much better than ‘porch,’ does it not?) lit up so dramatically as they are now. I just assume that this is holiday lighting. I just finished editing some of the many images that I took tonight after the drizzle let up a bit. The sculptures from historical Florence never looked quite this dramatic. The shadows are fantastic!
Posted by Kelly Borsheim Artist at 2:01 AM 2 comments: 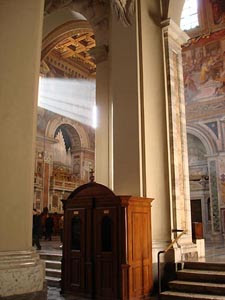 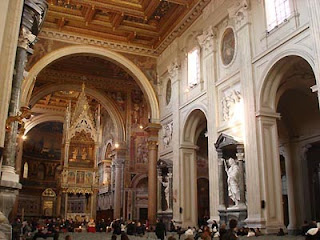 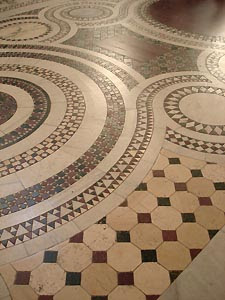 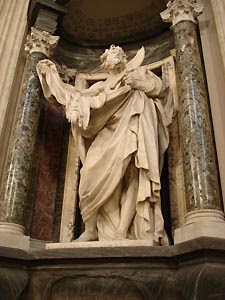 Franco lives in Roma and he has been inviting me back to Roma ever since I met him there in December of 2006 outside of the Coliseum. So, he greeted me at the Termini (train) Stazione after I left the Leonardo da Vinci Airport there on New Years’ Day recently. Wanting to show me the charm of his beloved city, Franco took me to see the inside of the Church of St. Giovanni, where the Pope lived before moving over to St. Peter's Basilica and Vatican City. The church is filled with art and stone! Franco seemed to know so much about every piece, too. I am including just four images of the many that I took that day to give you an idea of the grandeur of the place. Even the floor was delightful!

I was surprised a little bit that some of the fabulous columns were not, in fact, stone. They were either gesso (plaster) or stucco (I think Franco called it). And many of the white sculptures were not marble either, but a much less romantic or sexy material. If it is the same in Roma as in Florence, many of the original stone sculptures have been moved to a less public place for protection and replaced with meno cara copies.

When I was exhibiting in New York several years ago, a man was trying to tell me that his exhibited medium Parian II (I think?) was as good as marble. Now, I realize that I am biased towards the live material, but there is no way that cast stone, no matter how much marble dust goes into it, will ever look, much less feel, like real stone! This salesman was trying to convince me that the collectors wanted only an image and this fake stuff enabled them to get the sculpted image they wanted for a cheaper price.

He was not convincing me to switch. He simply depressed me. I am convinced that no matter how good a quality we humans can make a fake, a “blow-up doll” just cannot compete with a real woman. But then, maybe he was speaking about an audience different from the one I was/am seeking.

But when in Roma, do visit the Church of St. Giovanni. I was more charmed and interested than any negative emotion I temporarily felt.
Posted by Kelly Borsheim Artist at 11:49 PM 2 comments: 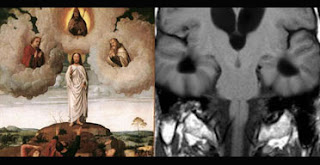 Above (top): Internet found image of Michelangelo's "Creation of Adam" fresco panel on the Sistine Chapel in the Vatican Museum. Below that: From the article in the Guardian: Detail from the Transfiguration of Christ by Gerard David showing a resemblance to a section of the brain (right)

Dear Art Fan,
I am not sure if I am allowed to do this, but I also am not sure how long news articles stay online and the following is pretty cool. So, . . . someone please tell me if I will have any bad happenings because I posted someone else's writing verbatim on my blog.
The following is an article from the United Kingdom's Guardian by Maev Kennedy. I hope you enjoy it below. During my first trip to Italia, including to the Vatican Museum, I was told the brain story regarding Michelangelo's fresco composition of the Sistine Chapel's "Creation of Adam" by a tour guide. This was the only tour I took -- promoted by Alessandro Downtown, the hostel that I stay in when in Roma. It was well worth the 15 euros! I have always been interested in art and anatomy, especially when my friend Vasily stated bluntly, "Artists, not doctors, started the study of anatomy." But then, artists do have the reputation for not following rules (It is my understanding that up until the Renaissance and perhaps even beyond it, it was against the law to defame a corpse by any kind of study of it).
Enjoy!

Any onlooker fleetingly imagining they spotted a human brain in the flurry of cherubs and drapery swirling around the figure of God as he stretches out a hand to raise Adam to life in Michaelangelo's [sic] famous fresco from the Sistine Chapel would probably conclude there was some malfunction in their own brain.

However, four eminent scientists are convinced the swirls are not meaningless decoration, but a transverse section of the sagittal section of a human brain.

The resemblance to a brain was first suggested by another scientist, FL Meshberger, but now Alessandro Paluzzi, Antonio Belli, Peter Bain and Laura Viva, from the neurosurgery, neurosciences and radiology departments of James Cook university hospital in Middlesbrough, Teesside, Charing Cross hospital in London and Southampton University, have dissected his theory and tracked down more brains in masterpieces by other Renaissance painters. "The idea came to me while looking at Raffaello's Transfiguration. Being a neurosurgeon I could immediately see a brain in the painting," Paluzzi said.

Partly as a joke to entertain sceptical [sic] colleagues, he and the team went on a brain trawl, and found many other examples. The team is convinced the artists were fascinated by the scientific discoveries being made by anatomists, but their theories had to be concealed in the imagery of their paintings, particularly when their clients were so often senior clergy who might see their scientific interests as blasphemous or even heretical, an offence punishable by death. The study, Brain imaging in the Renaissance, features in the Journal of the Royal Society of Medicine.

Michelangelo and Humor
Posted by Kelly Borsheim Artist at 3:34 AM No comments: 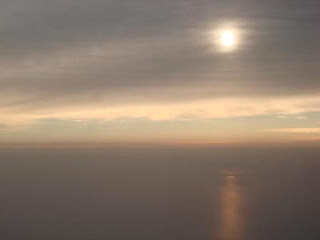 Always having been a dreamer of sorts, I am constantly watching the sky. One of my favorite pastimes is to photograph skies while I am flying. This image was taken around 8 am while I was just about to land in Chicago en route to Italy. From the ground shortly after I took this image, the skies looked dreary and it was snowing. But above the cloud line, something amazing was transpiring. I am often reminded that photography just cannot capture the feeling one has when surrounded by Nature’s beauty. Yet, I still strive to take a good image.

I hope you enjoy. Tomorrow I tell you more about my return to Italia.
Ciao, ciao.
Posted by Kelly Borsheim Artist at 9:57 PM 1 comment: 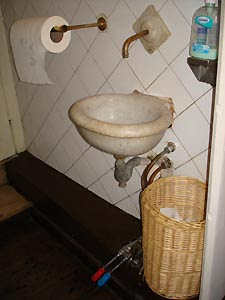 Pictured here is part of the restroom at The Art Bar in Florence, Italy. My friend Lisa encouraged me to go back and snap this shot after I told her the following story. Maybe it will save you some embarrassment when you travel abroad.

In the fall of 2006, my friend Jay and I were enjoying “Green Days” – a sour bright green vodka drink (no longer on the menu) at the Happy Hour at Rex’s on Via Fiesolana in Firenze. Inevitably, I had to make the journey to the necessary room. I wanted to wash my hands afterwards, but returned to our table a bit frustrated. I told Jay that a couple of Italians were laughing at me as I tried in vain to get the water to run from the faucets of two sinks.

There were no knobs to twist or turn, so naturally (for an American?) I assumed there was a sensor to turn on the water automatically. So, I waved my hands in increasingly exaggerated motions over and into the sink. Thinking it must be broken, I then moved to the second sink and repeated my endeavors. Niente!

Jay explained that there was a button to push on the floor, although in this case, it was very subtle. In the photo here, you can see two foot pedals: red for warm water, blue for cold. How clever! I mean, your hands are already either dirty or lathered up, so does it not make more sense to turn the water on with something other than your hands?

May you enhance your own powers of observation in 2008!
Posted by Kelly Borsheim Artist at 9:32 PM 3 comments: