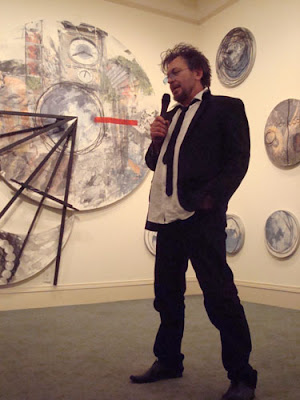 My life in Florence, Italy, always seems surreal to me. I am not sure why. It is just on such a different wavelength than my life in America. Of course, I tend to be a bit reclusive when I am working in Texas, not living so close to a city. In Florence, it seems sometimes that the most unusual and interesting people pass by and sometimes engage with me, especially when I am streetpainting on Via Calimala.

So, one night there about midnight last June, a couple of my colleagues and I met renowned artist Darryl Pottorf and Mark Pace. Darryl said that he was just cruisin’ along and saw the streetart, which stopped him in his tracks and he went back to get Mark and show him. My friends and I spent almost every evening hanging out and drinking with these guys during the rest of their Florentine stay. Darryl is quite the animated storyteller – and he has so many stories to tell!

I am currently in North Carolina on a trip that mixes business with family visits. My brother Steve and I recently delivered to a new client (but seasoned art collector) my bronze and stone sculpture “Against the Dying of the Light.”.

I was able to time this adventure so that I could stop by Brenau University in Gainesville, Georgia, to attend the art reception for my new friend Darryl’s exhibit titled “Links.”

Darryl’s strength lies in his compositions. He has the ability to take objects and images and arrange them in such a way as to delight the eye and give a sense of order, as well as creating confusion or mystery simultaneously. Darryl spoke about the importance of the circle in his work. He likes the connectivity of it and this shape seems to give him comfort. [I found that interesting as well since I see the world in triangles, although I know that in at least one of my artist statements, I mention that if you were to take an equilateral triangle and spin it from its center, you would see a circle.] 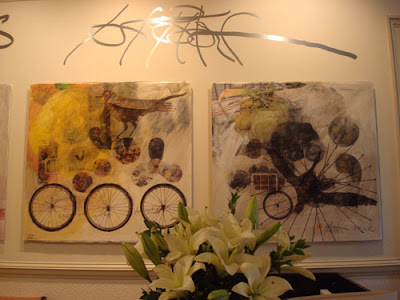 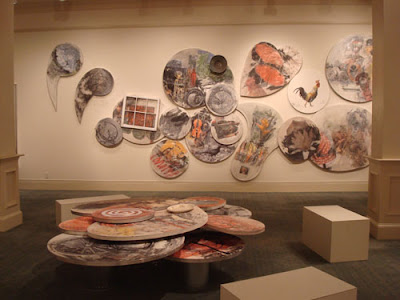 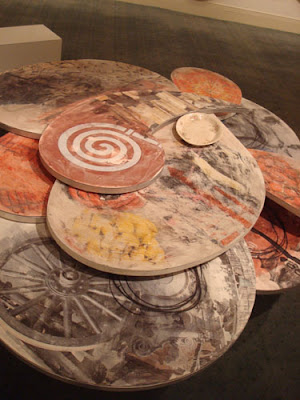 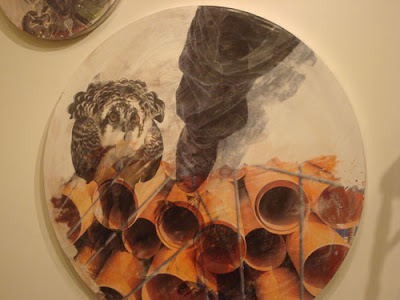 I feel a bit … something … sharing this next with you, but it does prove how generous a person and artist that Darryl Pottorf truly is. I sat on the carpeted floor of the gallery somewhat close to Darryl so that I could get some good photos of him during his speech without blocking the view of those behind me. Darryl had been speaking about his work and his long-time collaboration with Robert Rauschenberg, even sharing some stories about what he did with his dear friend Bob’s ashes.

Imagine my shock and surprise when Darryl looked down at me and pointed me out to everyone as he retold the story about meeting my colleague Johnny McGrogan, Simon Steele, and me on the streets of Firenze. And he said -- I kid you not -- that if there were an exhibit in the next room of our works, no one would come over to see his! [This was videotaped by the university, in case you think I am exaggerating.]

Seriously, I felt the blood rushing to my face and humbled beyond words. At dinner later, I thanked Darryl for being way too generous and teased him that he was not such a good businessman because an artist should not belittle himself and speak of other artists at his own show. Darryl tilted his head a bit confused, paused, and then laughed at said that “I cannot think of a better time to do it!” I thanked him, perhaps too often. But seriously, that was pretty amazing. 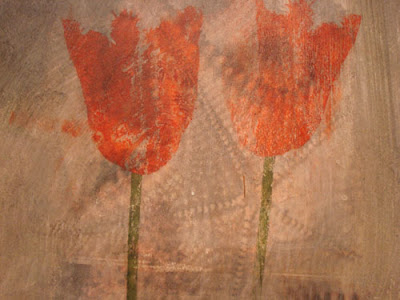 My favorite piece in the show was a dark one. I show it here – the composition with the spider on the figure’s head. Darryl said that when he is angry, he makes his darkest (but still good) pieces; however, if he writes on the art the name of the person who enticed his anger, he will not exhibit the work. Haha. The spider was one of his angry works -- and an interesting composition of found objects, charcoal, and other materials. 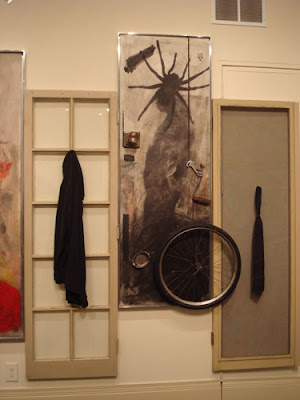 This last image was taken of me with Mark and Darryl at a nearby restaurant, 2 Dogs, after the reception. I feel very fortunate to have met such cool people who understand art and the art business way better than I and who are pretty down-to-Earth about it all.

Click on the highlighted words here to learn more about Darryl Pottorf and his current exhibit “Links” (going on through 21 November 2010).

If you would like to see more of my images of Darryl’s show, check out my Facebook Album (not sure if you must “befriend” me first or not …) 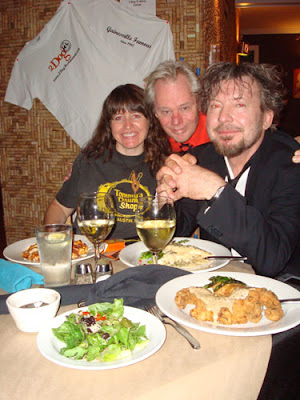