Here in Florence, and perhaps all of Italia, people express their dissatisfactions with life’s situations by way of a manifestazione. It is not uncommon to see parades of banner-carrying and flag-waving citizens and even stranieri (foreigners) marching through the streets of the historical center of Florence in protest of one thing or another.

Right now, for example, i madonnari are only allowed to paint art in the streets under the laws of holding a manifestazione. (The Comune has not renewed the permits for the street painters since the first of December. Therefore, we can only work together under protest in a small space on a joint project.) I have written in the past about some of these peaceful protests and have participated in several on behalf of the madonnari. I want to stand with my fellow artists to educate and to express how vital art is to each and every life. So far, le manifestazione of the street painters of Florence have been ineffective with the Comune (City Hall).

Another march that I photographed and wrote about on this blog had to do with the economy, especially the local farmers. Olive oil, wines, and many other types of food that are grown or raised in Tuscany are a major source of income (and joy) for many Italians. The manifestazione that I saw was to raise awareness of the public to “buy locally” since taxes on these products had gone up substantially and the farmers needed the support.

Last Saturday, there was a march around the Duomo, Piazza della Signoria, and Piazza della Repubblica to protest the horrible bombings in Palestine that have killed and wounded far too many people.

I have been told in the past “Go back to making pretty pictures; your opinion does not count. As an artist, what could you possibly understand about politics?” One almost becomes accustomed to being considered a freak by non-artists, but last time I checked, I was still a socially responsible human being.

Artists should be allowed - and even expected - to have an opinion on these topics as much as dentists, bus drivers, politicians, and students. Maybe even moreso because of what we really do, which is NOT simply making pretty pictures. We are all part of the human race, strange as some of us are at times.

I must admit that since living in Italy, I have developed for the first time friendships with people who live at the heart of this Israeli-Palestinian conflict. And on both sides of it. I am still ignorant of so much. It does not help that since the age of ten I have believed that everything is true. It was the only thing that made sense to me then, as it still does now.

I do not like violence. I am not sure many people would claim that they do like violence, but some see it as a necessary evil. I cannot make myself go that far. I cannot help thinking that the bottom line is that this particular situation has not been resolved yet and there is no light at the end of the tunnel. Violence and hatred have surrounded this area for too many years. Is it not logical to be looking for another way?

However, this is an art blog and my point really is that art examines who we are. Not all art is political (thank goodness!), but art has a purpose and that would be to move us emotionally. We document our feelings, our actions, and our hopes. Art and artists can change the world.

I include here some images of last Saturday’s manifestazione. I did not take them, but was given them by a friend. This peaceful march throughout Florence centro includes some paintings that are pretty intense. 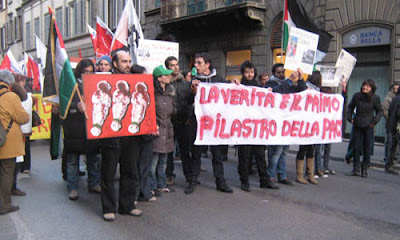 In the first photo, the banner reads “La verità è l primo pilastro della pace.” (The truth is the first pillar of peace.” 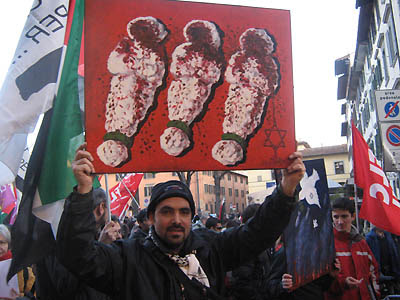 In the painting on the right of the third photo, the text reads “un film americano lungo quando finisce?” (‘A long American film [this bombing of Gaza in the name of Israel]. When will it end?’) I was actually told in the time shortly after the bombings that President Bush did this to help President-elect Obama. Was that sarcasm? I am still trying to figure a lot of things out. 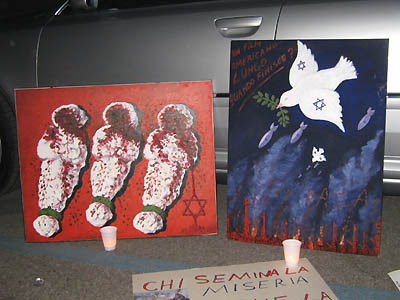 Today’s images show you a portrait drawing I created on 22 October 2008 of a male model named Michael. He was a new model for my Open Studio here in Florence, Italy – an American hoping to fund his trip abroad – and was not sure he could pose nude for two hours. However, he held beautifully a standing pose not unlike Rodin’s “Balzac” sculpture.

It was a nice symmetrical pose with this active twist to the neck and many artists drew it well. I, however, had my black paper in hand and was anxious to try out my first white chalk on black paper drawing. So here he is. The original drawing “Michael” is pictured here on the small table I have in my room to work. 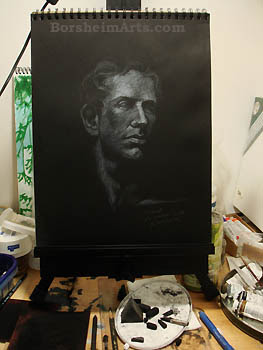 You can see that I have on the table some charcoal drawing materials, as well as a few paint supplies in this tiny space. Some days I get fixated on one project and other days, I change throughout the day. That decision is made based on what is going on with any given artwork. And also what mood I am in. For example, if I am refining details (vs. making design decisions), I may find the task meditative or simply dull. One feeling allows me to continue, while the latter entices me to reward myself after a time by working on another project.

I am including here a particolare (Italian for ‘detail image’) of my portrait drawing of Michael. While people seem interested to know that I only had two hours with this model, it takes years of training to draw something as complicated as a face in such a short period of time. I have been trying to push myself to make every mark count – a type of minimalism or better -- efficiency -- that I believe lends more of an awe-appeal to art.

And I was interested in including some of the light on the neck and collarbone as compositional devices, as well as to imply a gesture for the whole figure. I hope you enjoy this artwork. 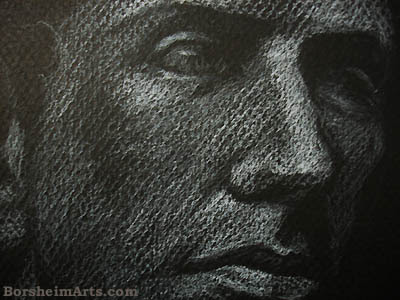 And do not forget my Portrait Sale this month to celebrate my eight years of creating art full-time. Let me work from your photos or from life! Contact me for details (just respond to this blog or visit my site).

Please let me know if this is a gift or if you are having another deadline (such as an anniversary party or wedding) so that I can make sure you receive your original art on time. And of course, if you are here in Florence, Italy, I would love to make a drawing of you from life.

Thank you for your continued interest and support.

Posted by Kelly Borsheim Artist at 12:17 AM No comments:

Notan - Designs in Dark and Light

I recently found this article about Notan on the Empty Easel Web site. I had never before heard of the word, but it sounds a lot like what I am working with now in Florence, Italy. 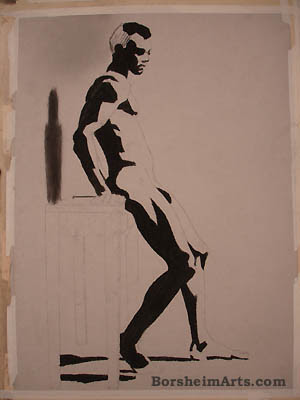 The author Dianne Mize distinguishes between two approaches to deciding what part of an image is considered a “dark” and what is a “light” when creating an image. She calls the two styles “Design Notan” (think icon shapes of an object itself) and “Pictorial Notan,” which follows a more organic approach to light.

The artists’ choice of Notan method would, of course, greatly affect the choice of abstract shapes in one’s artwork, and therefore the emotion that the artwork would evoke. It is an interesting read, especially when viewing the images of art that she chose to help illuminate these concepts.

Pictured here is a work-in-progress image of my charcoal drawing of a model named Joshua. Certainly the finished work will look quite a bit different (I hope to share him with you soon), but it all started with a decision about abstract shapes that separate my lights from my dark patterns. And that is one reason that every artists’ work is different, even when trying to create a similar style of work.

Posted by Kelly Borsheim Artist at 12:34 AM No comments:

Email ThisBlogThis!Share to TwitterShare to FacebookShare to Pinterest
Labels: art, dark and light, drawing, how to design art, how to draw, Notan

In keeping with this month’s anniversary celebration and my sale on portraits, I wanted to share with you this portrait drawing I created back in November from a live model.

I have been using charcoal drawings to learn more about subtlety in tones. Anyone who knows me knows that expressing subtlety is a challenge for me. I did many drawings with only charcoal on paper. In recent months I began to draw on a non-white paper and then add white pastel to push up the contrast of my images a bit.

This naturally led to my trying to create subtle changes in tone with only the white pastel on the paper, because if the white pastel and the black charcoal mix, one gets mud -- or a bluish white. Normally, I hate the tool called “the stomp,” but when I want to push my Rembrandt pastel into the paper I am using, nothing beats the stomp. A stomp is basically a very tightly rolled paper about the size of a short pencil that has both ends sharpened to a point. I also use this tool, plus various erasers to create a variety of whites. 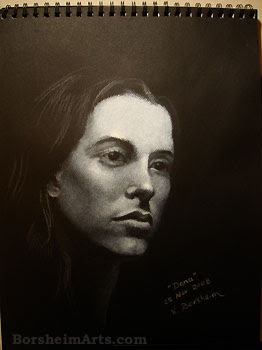 In this portrait drawing of my friend and fellow artist Dana, I used only white pastels on a black Canson Mi-Teintes paper they label as “Luxurious paper with subtle texture.”
If I literally only drew what I considered to be the lights, the face would appear to float in all of this black, perhaps a bit like the Phantom of the Opera. And Dana has dark hair. So I chose to imply some hair and a neck.

This look is certainly different from others I have tried, but I am loving the exploration and what I am learning about form from these types of portrait drawings. I hope you find this portrait “Dana” of interest. She is available, too. How about that? 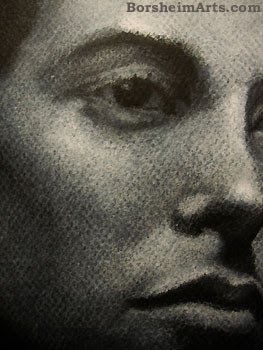 Posted by Kelly Borsheim Artist at 1:20 AM 4 comments: