Cari Amici (Dear Friends),
Artists and art critics have been interested in the camera obscura for several centuries, but it was first described by a Chinese philosopher in the 5th century B.C.  Aristotle (384 to 322 BCE) described the principles of the camera obscura and pinhole camera when he viewed a solar eclipse as projected onto the ground through tiny spaces between tree leaves (a pinhole).
However, it was not until Alhazen (nicknamed "Ptolemy the Second”) that it was put together that the projected image on the screen was actually the rearranged (upside down) image of the light from the other side of the aperture (pinhole).  Alhazen was a mathematician, scientist, and astronomer who made many advances in optics.  He was even studying the magnifying power of a lens.  Alhazan is thought to have died in Cairo, Egypt  in 1040 A.D.

Leonardo da Vinci took his turn describing the optics effects and suggested their use by artists as an aid in drawing.  By the mid-1500s, another Italian Giambattista della Porta began publishing a series of books (“Magia Naturalis,” starting in 1558) about many topics, including the use of a convex lens and he receives credit for having perfected the camera obscura.  He also explained in popular terms how the lens of the eye was similar to the lens of the camera obscura, increasing the latter’s fame. 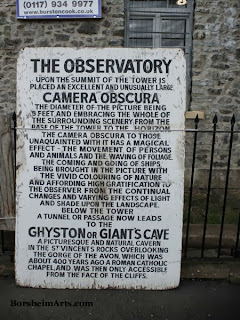 Today, the debate continues on whether or not famous artists, such as Vermeer, have used a camera obscura to aid in their realistic drawings and paintings.  I am not so fussed about these things because from what I have seen, if one can draw well from life, tools are aids.  If one cannot draw well, then the tools are a crutch.  But I think that one can see the difference in the struggle:  Just a theory.  I also tend to be more interested in the idea and how well its execution has evoked emotion.  Technique is a large part of the awe factor, but without the other qualities, the work can be dull. 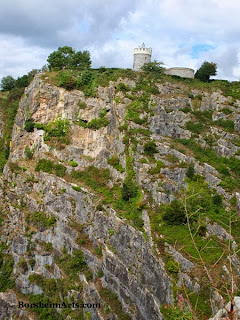 While in Bristol, England, last week, I got to see the famous Clifton Suspension Bridge:  In person and on foot, but also, with a large camera obscura!  There is a nearby Observatory that houses a camera obscura.  The building is 337 feet above the gorge and river below.  Oddly enough, I took most of the images from inside the Observatory near the bridge (vs. of the observatory itself), and the image of it was taken from the bridge.  You will just see the tops of this building that once was a snuff mill.
The mill suffered a huge fire and lay dormant for decades until an artist, William West, rented it as a studio in 1828.  During his time there, he installed the camera obscura that is still there today.  The 5-inch convex lens and sloping mirror project an image of the surrounding areas outside (including the suspension bridge), but not a mirror image, onto a large white disk.  I was surprised by how bumpy this surface was.
When my friend Wendy and I entered the tower room with the camera obscura and its projected image, it was dark and there were two women and three children enjoying the experience.  Of course, the entire space would have to be painted dark, with no other windows in order to clearly see the projected image.  I was surprised at how sharp the image was and on a bright day it is said to be even better. 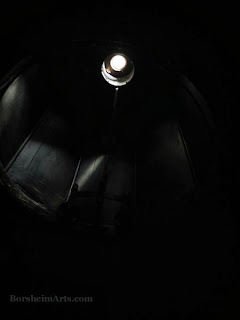 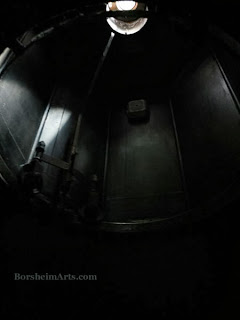 The lens and the mirror above it are naturally high up.  The mirror exists simply to direct the image, otherwise one would be looking at the sky above projected downwards.  The mirror is connected to a large metal pole that is on a pair of rollers.  The rollers rotate the mirror in a circle around the lens.  Visitors may push this long handle to change the view.  You may see in one image the blurred movement in the projected image while the mirror is being re-aimed.  I was amused when one of the adults pointed out to the children some people kissing in the park.  I really is true that one should be careful of public behavior:  someone is inevitably watching! Haha. 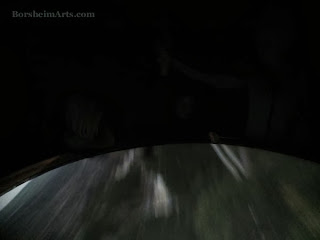 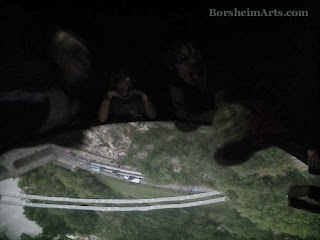 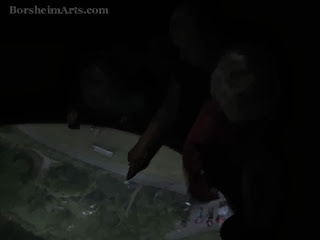 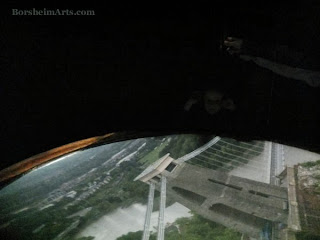 Later, the door was opened and I took a few shots of the room with more light in it so you can get a better idea of the hardware and set up. 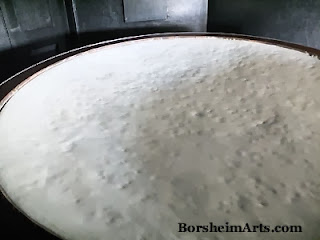 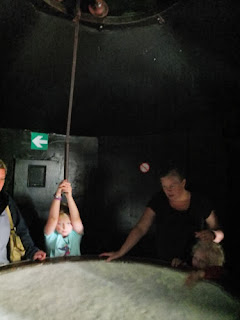 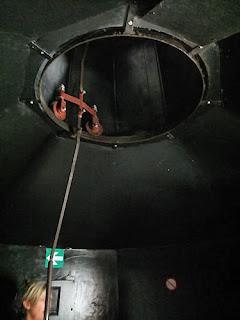 The Bristol Observatory
is one of the two camera obscuras open to the public in England.  Wendy was surprised that it now costs £2 to enter, having been free to visit for so long.  However, when researching this blog post, I found an article in the BBC that stated back in June 2013 that both the observatory and the camera obscura were for sale for £2M.  The article implies that there was some time in which the facility was not open at all.  I do not know whether or not a sale was made, but I was happy to be able to see this wondrous thing.

The Observatory is listed on the “Buildings at Risk Register” by English Heritage.  Perhaps the small donation is enough to keep the doors open… or at least, keep a person employed for a bit.  The Observatory also houses the entrance that artist William West built to a cave that opens out on the face of the cliff overlooking the gorge.  We did not visit that, preferring to do some plein air painting instead.


Follow these links for more information about the camera obscura in Bristol, England:
http://en.wikipedia.org/wiki/Observatory,_Bristol

Above: Cover for book:
"My Life as a Street Painter in Florence, Italy"

Order the book today
from the artist.
(Click on image above.)