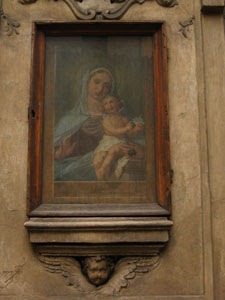 In my recently published art newsletter I wrote about the devotional art in Florence, Italy, specifically, the tabernacles. In Italian they are called tabernacoli fiorentini.

I have shared with you what I know of the history of these devotional windows, as well as many images I have taken of various tabernacles around the central part of the Renaissance City over the last few years. 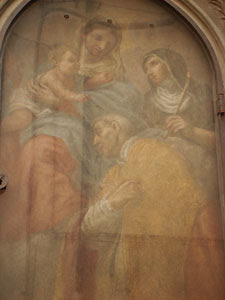 Posted by Kelly Borsheim Artist at 7:07 AM No comments:

I have not yet decided just how realistic I want to go with the stone carving “The Gymnast.” I know that my style tends towards realism, but I am not necessarily thinking strictly in those terms when I work. And I tend to use hair as a compositional device more than as a depiction of reality.

That said, I still find inspiration in Nature and models. In this case, I have been using my most available model. And I have a lot of hair. I put it up into a ponytail and moved my head about, looking in the mirror and touching my head to see how the hair fell. Often I see better with my fingertips.

Also, there is so much symmetry in this pike pose that I wanted the hair, along with the toes, to be obviously asymmetrical. You may see in the first image that I have redrawn the skull to a more proportionate size. I had left so much stone around the head because I had not yet decided on how I wanted the hair to fall. But it was time to reduce the size of the head so that I could continue to work the rest of the stone sculpture. 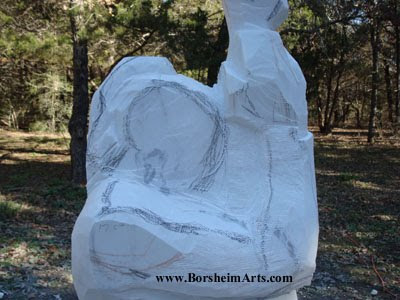 If I let something go for too long, my brain will start to make order out of the disproportion and I will no longer see my error as such. At this point, I am working the masses of the hair only from three sides, still allowing myself to change my mind as I go along. The trick is to shape the form as I reduce the mass of marble. 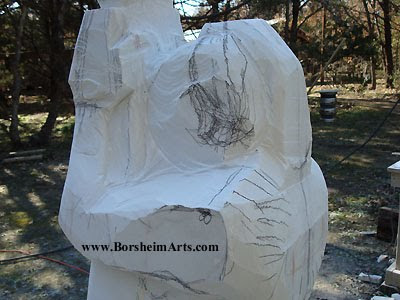 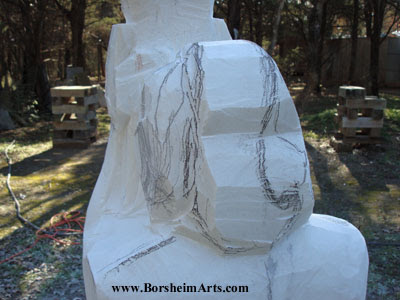 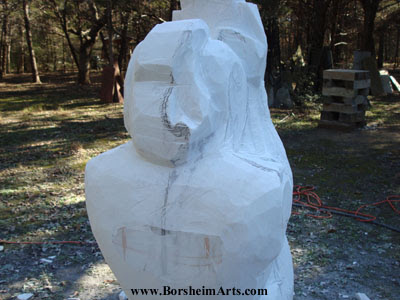 Posted by Kelly Borsheim Artist at 6:11 AM 6 comments:

Often the view you would see the least is the one that gives the most useful information about the form in sculpture. Here I show you the bird’s eye view so that you may see just how large the skull really is in comparison to the rest of the figure, “The Gymnast.” 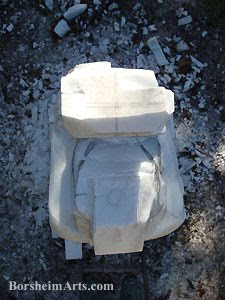 Although I am a bit cautious about cutting away too much stone, stone expansion -- a term I believe was coined by sculptor Scott Owens -- seems to come into play a lot. I find at some point, I have a difficult seeing the proper proportions of my figure because there is simply too much stone in the way.

In the same way, I began to have a difficult time reducing the arms until I got the head carved smaller. Somehow small hands on a body with a large head messes with my mind and vision. 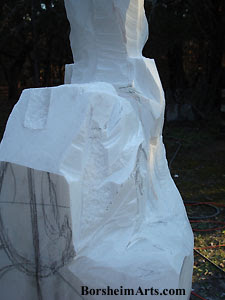 And this is why it is important to work the entire piece instead of focusing too much on the"Bath Tub Technique.” This is what I call it when one starts to work a piece from top and then moves lower and lower until reaching the bottom of the artwork, in the way that your body would be revealed as the water is slowly drained away in the tub (if you were sitting in the tub, of course). 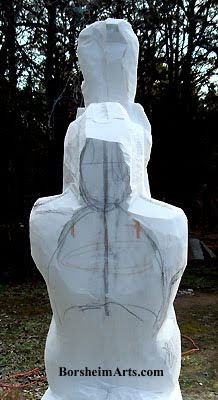 In this final image, you may see my markings for the next cutting. I am refining the line of the trapezius at the shoulder and needing to remove material under the right arm along the drawn-in rib cage. And in a brown crayon, you may see the width of the skull, marked along the uncarved shoulder blades so I can keep my measurements for a while longer.

I wish the days were warmer and that I had some anti-vibration gloves.

Posted by Kelly Borsheim Artist at 6:08 PM No comments: