While the Leopold Museum in Vienna, Austria, brags about holding an extensive collection of Austrian Expressionism artworks by Egon Schiele and Gustav Klimt, among other Austrian artists, I was surprised by the works I saw there.

For the last three years, I have been studying more seriously, or at least with a more rigid schedule or focus, classical art. At my age, I thought I did not want to take time out for this, but ultimately I realized that I was not improving on the former path that I was on and I needed to slow down and learn what I missed years ago.

For this reason, I was thrilled to know that Gustav Klimt, so famous for a looser, more illustrator style, could produce really beautiful, painterly works in a classical style. Check out these two portrait paintings of an old man. They have the same title, which was translated in different ways. “Der Blinde” was called “The Blind Man” for one painting. The other, on the other end of the same wall, was translated to “Portrait of an Old Man.” They both look tight from a respectable distance, but up close, the strokes are minimally wonderful. 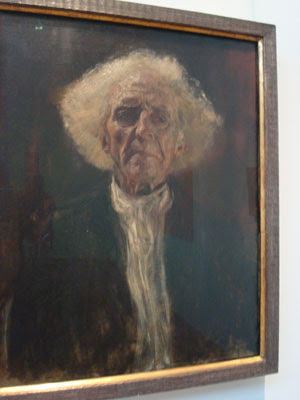 This portrait of a little girl is the size of a normal postcard (6 x 4”). Look how tight this is compared to the style that Gustav Klimt became known for, Austrian Expressionism. He definitely could draw! And once he knew he had those skills, then he knew that his hand, eye, and brain were all on the same page and he could begin intelligent exploration.
More tomorrow . . . 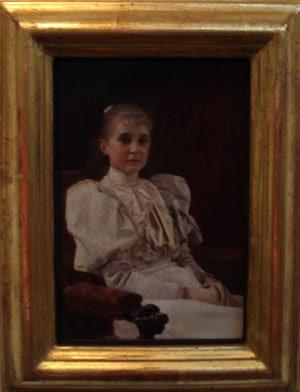 And I leave you with an image I took outside of the Parliament building in Vienna. There are more, but I will spare you. And I hope you like the “Eye Tree” I do not know the real name of this tree, but I liked it a lot. It reminded me of childhood scary stories in which the woods were always watching. Trees truly are magical. Note the “art nouveau” type patterning in the leaves between the “V” and the funky face in the lower right -- Nature aids art. 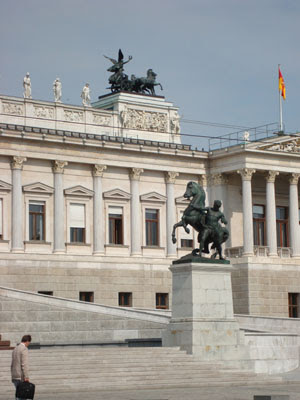 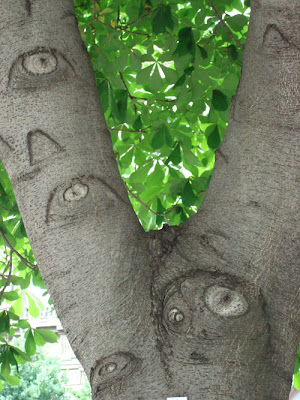 Posted by Kelly Borsheim Artist at 7:32 AM 2 comments:

Through September 21 there is a special exhibit at the Leopold Museum in Vienna, Austria featuring a large body of work by Austrian artist Josef Maria Auchentaller. The exhibit is titled “Josef Maria Auchentaller – Jugendstil Pur!” (Pure Art Nouveau!) and displays about 300 works of art nouveau drawings, paintings, designs and jewelry, as well as photographs.

Auchentaller was part of the Vienna Secession (an artist revolt against the established art market), along with Gustav Klimt and others. This artist’s work is largely in the hands of his family and this exhibit features a lot of his works not previously shown to the public.

I am including a few images here that you might not find through the Internet. It was interesting to see this artist’s work after having seen Alphonse Mucha in Prague many years ago. Auchentaller’s works of the female figure and the jewelry designs are similar to Mr. Mucha’s, but there is definitely a distinctive voice at work. Still, I enjoyed the exploration of patterns that Art Nouveau brought to us. 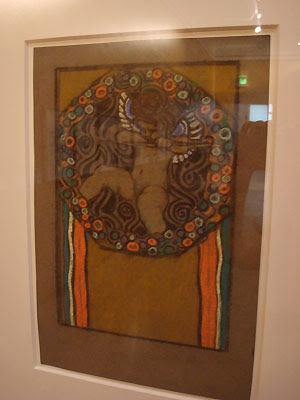 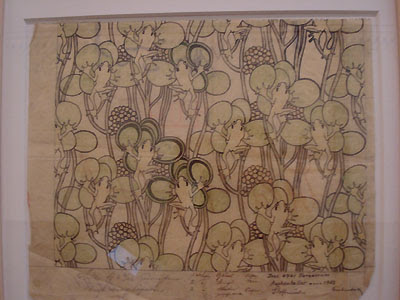 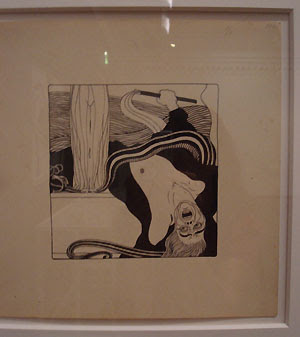 This last image is a portrait in another area of the Leopold Museum that I just found irresistible. The translated title is “Man With Fur Cap (My Brother The Animal)” and was painted in 1923 by Albert Birkle. Enjoy . . . 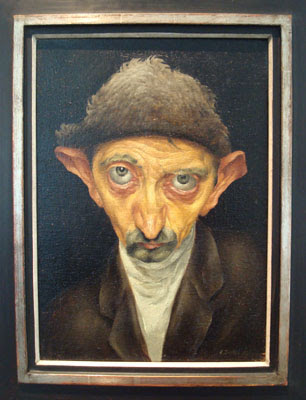 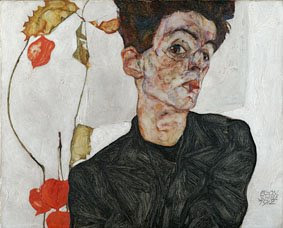 I have always liked the quirky energetic lines in the drawings and painting of Austrian artist Egon Schiele, although some artworks tend to have an epileptic feel that I find mildly disturbing. Still, there is an honesty and a humanity in his works that cannot be denied. I was thrilled to be able to visit the Leopold Museum in Vienna, Austria, to see the real paintings.

The museum says it best:

The pictorial device that Schiele first made his own and with which he proved his mastery was the personal line, whereby he developed the strategies of accentuating and omitting to a high art. Like no other artist of his day, Schiele succeeded in using drawing alone – and here often nothing more than an outline – to communicate not only formal situations and their spatiality, but also emotions.

It goes on to say that he is also a gifted colorist, whose choices accent the emotions in the line. He has not simply filled-in pre-defined spaces.

The Leopold Museum was opened in 2001 in Vienna, Austria, and houses the previously private art collection of Rudolph and Elisabeth Leopold, including the largest collection in the world of the artworks of Egon Schiele.

Egon Schiele died at the age of 28 on Halloween Day from the Spanish flu in 1918, three days after his 6-month pregnant wife succumbed. He had recently received the career jump that most artists strive for. So many losses.

Rudolph Leopold was born in 1925 in Vienna. He studied medicine before he began attending art history lectures and beginning his art collection. He focused on Austrian artists as well as many others, but especially liked the works of the late Egon Schiele. He collected earnestly, enabled perhaps because Egon Schiele was not considered important by art historians at the time. Mr. Leopold began to promote his artists, finally gaining them the recognition they deserved. Today, The Leopold Museum is one of the most visited ones in Vienna.

Before visiting Vienna, I was most familiar with the erotic artworks and the self-portraits of Egon Schiele. However, in the museum, I came to appreciate his entire body of work even more, especially the landscapes. The painting, shown here, of the building with the hanging laundry is one of my favorites. I love how the light emphasizes the point of interest near the center. I enjoyed the subtle colors and shapes depicting the tiles on each rooftop. It was especially interesting to see a small photograph displayed to the left of the original painting that shows the real building that inspired the art. This enhanced my appreciation to see for myself how one brilliant artist interpreted the world around him. 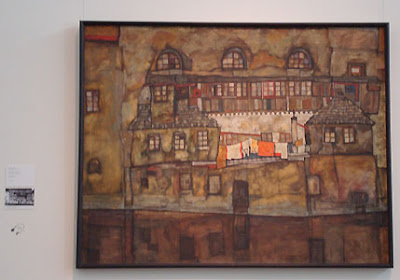 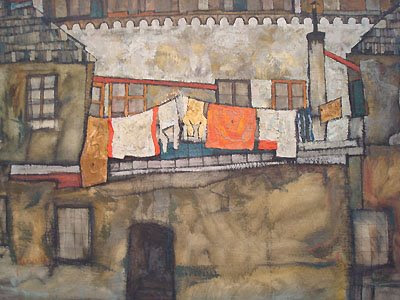 Artists learn a lot by copying the works of other artists. And as difficult as it is to try to repeat the thoughts and actions of another person exactly, it is even more difficult to conceive a fresh original composition. For example, in the self-portrait shown at the top of this blog post, note that the background on the right is not just a white shape. An angular grey shape and the artist’s distinctive signature break up the white form. Was there a window behind the artist? It is not clearly a window, and the grey is close enough to the white in tone that it remains in the background, never distracting from the figure. Yet, I would argue that this composition is more interesting because of these additions.

More on The Leopold Museum next time . . .

Posted by Kelly Borsheim Artist at 4:14 AM 4 comments: 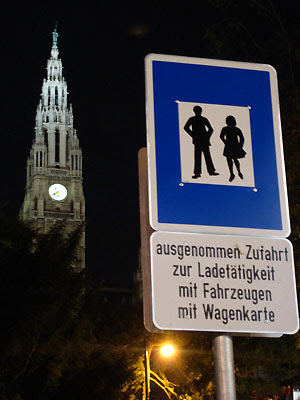 One of the perks of hosteling (or I suppose even couch surfing) is that you get good travel tips right away. While I spent my days in the museums, I had no idea where to go for nightlife in Vienna. Austria is well known for its music, and my bunkmates told me that there was a lovely music festival going on at the Rathaus.

Vienna’s Rathaus is a fabulous building of Gothic design built between 1872 and 1883. It was designed by Friedrich von Schmidt and serves as the meeting places for the city council and the mayor’s office of Vienna, among other things.

I took the “U line” to get to the neighborhood and walked over to the Rathaus Park. It was pretty cool. Projected onto a huge screen was a concert with an orchestra. Afterwards an opera was performed for the crowd. Chairs and a few bleachers in the back were placed outdoors in front of the Rathaus. The night air was perfect. I could see the moon, which always energizes and soothes me. In the park area between the Rathaus and the Burg Theatre (an equally impressive building with a lot of sculptures on exhibit), there were food booths representing the world’s cuisines. Unfortunately for me, I had had an accident on my bicycle in Florence right before hopping onto a night train for Vienna. Here it is more than two weeks later, and I still have bruises. Anyway, I was too tired to hang out at the Rathaus after midnight, but my bunkmates told me that after the concert, there were colored lights turned on all over the Rathaus building.

Unfortunately, the next night it poured rain. Although it cleared up by evening, I decided to use the Internet and catch up on work before heading out to my next destination in the mountains of Austria. Had I stayed in Vienna longer, I would have definitely returned to the Rathaus for my eveing adventures. 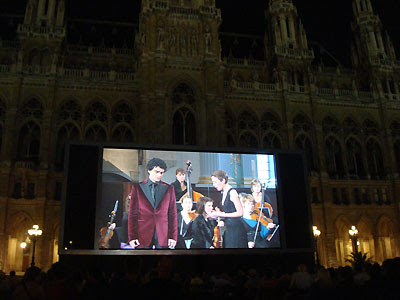 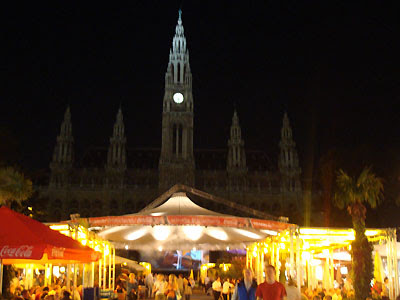