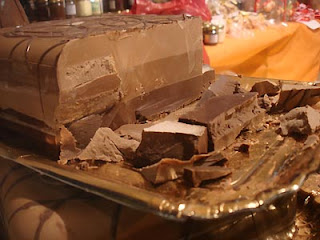 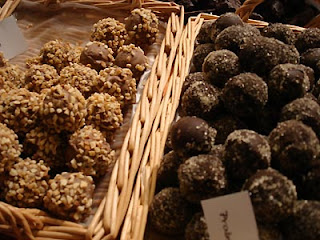 Since Thursday, Piazza Santa Croce in Florence, Italy, has hosted the Chocolate Festival. God, a girl could fall in love here! Or perhaps, out. In fact, I saw my friend Janné on the Ponte alle Grazie on Friday afternoon as he peered over the edge into the Fiume Arno (Arno River). He said with some dismay that his girlfriend Alba did not even look at him for a whole hour because she was so enchanted by what she saw at the Chocolate Festival. She especially enjoyed the large sculpture of a chocolate pig. I wish you could have seen his sweet, young sad face as he described their visit there the night before. (No worries, he was not feeling suicidal. He was simply waiting for her to arrive for their lunch date.) 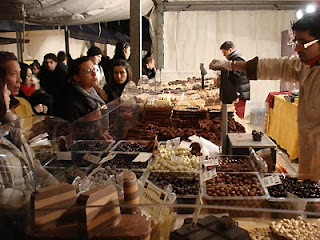 My favorite temptations that I drooled over but have not succumbed to (yet?) were the chocolate liquors, a chocolate with curry, and some choco balls rolled in pistachio. And I am totally enchanted by the assortment of tools, such as pliers, made entirely from chocolate and dusted to look like they are rusty tools. And, some chocolate teas caught my eye. Oh, did I forget the candied ginger dipped in chocolate? Hmmm . . . will I be able to resist returning tomorrow with some euros in hand? It is the last day of this year’s Chocolate Festival in Firenze.
Posted by Kelly Borsheim Artist at 11:04 PM 2 comments: 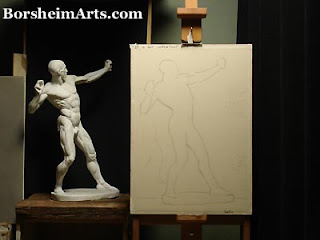 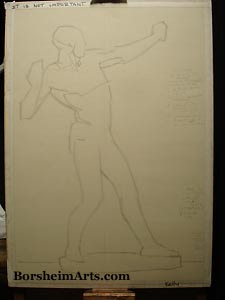 My latest progetto is to use the sight-size method to draw an écorché in carboncino (charcoal). An écorché (pronounced ay-KOHR-shay) is a sculpture, in this case in gesso / plaster, that shows the musculature of the body without the skin. I took this image on the 15th of January. You can see the basic setup for drawing. My easel is pulled forward a bit so that my drawing will fit on my paper. The detailed image shows my gesture sketch that I have started to draw in the placements for some of the shadows.

This will be refined as I continue to work.
Posted by Kelly Borsheim Artist at 12:29 AM 1 comment: 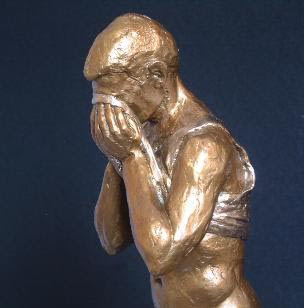 I read today an online article entitled, “In Praise of Melancholy” by Eric G. Wilson. Here is an excerpt that I hope you enjoy:

“Melancholia pushes against the easy "either/or" of the status quo. It thrives in unexplored middle ground between oppositions, in the "both/and." It fosters fresh insights into relationships between oppositions, especially that great polarity life and death. It encourages new ways of conceiving and naming the mysterious connections between antinomies. It returns us to innocence, to the ability to play in the potential without being constrained to the actual. Such respites from causality refresh our relationship to the world, grant us beautiful vistas, energize our hearts and our minds. . . .

Suffering the gloom, inevitable as breath, we must further accept this fact that the world hates: We are forever incomplete, fragments of some ungraspable whole. Our unfinished natures — we are never pure actualities but always vague potentials — make life a constant struggle, a bout with the persistent unknown. But this extension into the abyss is also our salvation. To be only a fragment is always to strive for something beyond ourselves, something transcendent. That striving is always an act of freedom, of choosing one road instead of another. Though this labor is arduous — it requires constant attention to our mysterious and shifting interiors — it is also ecstatic, an almost infinite sounding of the exquisite riddles of Being.

To be against happiness is to embrace ecstasy. Incompleteness is a call to life.” 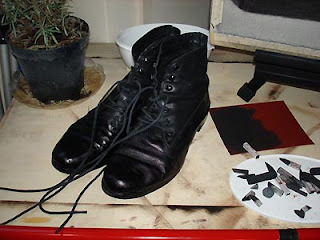 Back around 1997 when I was working as a copyeditor at hoovers.com in Austin, Texas, US, my coworker Regan gave me her old leather lace-up shoes. I love them.

Then in September 2006, I was walking down Via dei Pepi in Florence, Italy, when I was coaxed into a shoe repair place by a man about my age, Giuseppe, and an older man. They were kind enough and I politely looked around their neighboring tiny shops before resuming my course. I had never had shoes professionally repaired before, apparently preferring to “Shoe-Goo” them until they are completely ruined.

Giuseppe ran after me in the street and dropped something into my drawing bag, saying, “segreto” while placing one finger across his lips. I was a bit confused, but thanked him, and we exchanged names and smiles. And this is the way one learns Italian. (The something turned out to be some clear shoe polish in a vertical tube: un regalo, a gift, and apparently a secret one. Hence the reason I am posting this blog, right!)

Then one morning last fall in Florence, I ran into a new friend, Maria. She held a pair of lovely boots in her hand and was searching for a repair place. So, remembering my exchange with Giuseppe, I gave her direxions to Via dei Pepi. Maria was pleased with the service and the negotiated price.

With rain for many days in a row, I recently had to admit that my cherished leather lace-ups were separating at the toe of the soles. Always being shy about bargaining, Maria offered to go with me. We met the older man, a real charmer. Maria told him that she was from Spain and since he loved to travel, the bartering went very well. It also helped that we live here. He handed me a copy of an article that had been written about him in a newspaper, describing him as a giramondo (world traveler).

When I returned at lunch, I had caught the 84-year-old Signore Carmine taking a nap, as though he were simply waiting for my return before closing up shop at 13:00. I had asked him only to repair the separating toe (and not the worn-out heal), but he must have decided that was just wrong. In addition to the repair I had asked for, he cleaned and polished my old shoes, giving them new life. He was so charming. He seemed genuinely happy to see me and even took my hand, pulled back the mitten a little, and kissed my wrist, exclaiming, “Che bella!”

So, my shoes can be worn in the rain again safely, I had a lovely experience, and now I look forward to walking down Via dei Pepi even more than before.

If you find yourself in Florence, Italy, in need of anything shoe- or leather-related, feel free to walk down this street not too far from Piazza Santa Croce. Here is the address: