The Other President George

In a previous post, I began to introduce you to my almost finished stone carving “The Offering.” I told you how the idea was born based on then-President George W. Bush’s response to the killings on September 11, 2001.

I cannot believe that I did not take a better image at the right stage of carving the stone for this next bit of information. But my husband John nicknamed this sculpture “George” after our first President, George Washington, because of the way I blocked out the skull and mostly the hair. I was still new at carving marble back in 2002 when this image was taken and being cautious is quite important since I do not get to put the stone back if I remove too much. 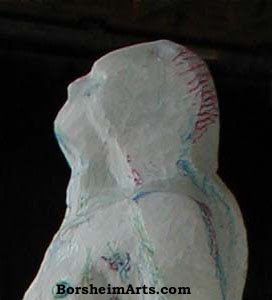 These next two images show my progress on “George” in February of 2003. Unfortunately, “George” did not get any more physical attention until after I began work on another figurative carving, “Stargazer.” “Stargazer” took me two years to complete. It may sound stupid but I tend to get intimidated by my vision of what I want and my lack of belief that I can create it. When this happens, I set aside the work I fear I will ruin and go work on another project that will improve the skill I feel I am lacking.

In any event, I could not forget George and drew on the stone and carved occasionally for a month or so in each year of 2005, 2006, and 2007. Next time, I will show you images from George’s progress in August of 2008. 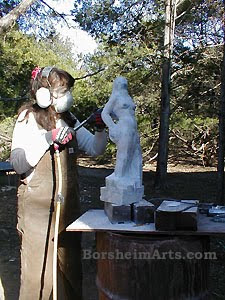 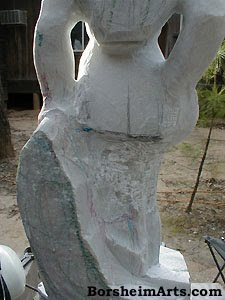 I had a busy day today, but in many ways wonderful. Two of my errands were to different shops to pick up the new frames for two of my paintings done in Italy. Wow, it really is amazing how a good frame completes a painting! 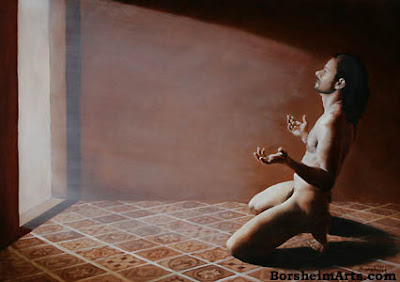 While my figurative oil painting “Relinquish” was being put inside its lovely new and elegant, coffee-colored Ansley frame from Larson-Juhl, I wandered through Jerry’s Artarama. Currently on exhibit along one wall in the art supply store is a collection of large artworks by young girls aged 6 to 13 who participated in a four-day workshop at The Girls’ School of Austin. Artist and teacher Nancy D. Hoover taught the workshop that focused on collage, gesso texture, and acrylic painting techniques.

I found the painting shown here – I believe a 30 x 30-inch canvas – by a ten-year-old named Dani to be quite enchanting. Her title is “Walking on Sunshine” and I suspect is inspired from a (fun dance) song lyric. Dani’s acrylic collage painting struck me as pure and joyful, a true celebration of life. She created an interesting composition and I just wanted to share her art with you. I do not know her, but I hope she will not mind my posting this. 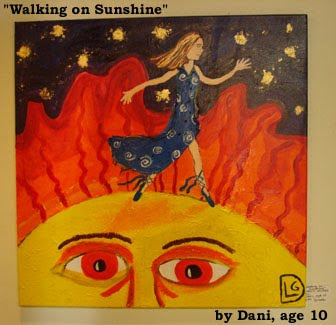 Posted by Kelly Borsheim Artist at 6:43 AM 2 comments:

There are two types of vulnerability: the kind you have control over and the kind that you do not. An Achilles’ Heel is a good example of vulnerability as a liability. The phrase comes from the legend of the Greek hero Achilles. The story is that his mother Thetis wanted to protect him by dipping him into the River Styx to make her son invulnerable. However, she held him by his heel with her thumb and forefinger (a strong mother!), thus blocking the magical waters from reaching all of him. Achilles is said to have died by an arrow shot into this same heel.

I suspect that it was this type of vulnerability, the fatal flaw, that then-President George W. Bush was thinking about after the horrible events on September 11, 2001. One of his initial reactions was to try to stop immigration into America.. After all, if we do not permit (more) foreigners to enter America, they cannot hurt us. America should not be so vulnerable. Right?

Well, . . . I was less than pleased. But I realized that I tend to see vulnerability as the greatest gift one could offer another. Thus the idea for my next sculpture “The Offering” was born. Sure, when we make ourselves vulnerable to another, we can be hurt. But I decided that if this vulnerability is our choice, then we come from a position of strength and goodness. Some things others cannot control.

In body language, one exhibits a lack of fear by exposing one’s torso. You will see this in many painted and sculptural depictions of political leaders. In essence, a brave and secure person is sending the message, “I can be vulnerable to you and invincible, too.”
The opposite position would be the curled up, closed fetal position that is designed to protect us. Our skeleton protects our vulnerable bellies. 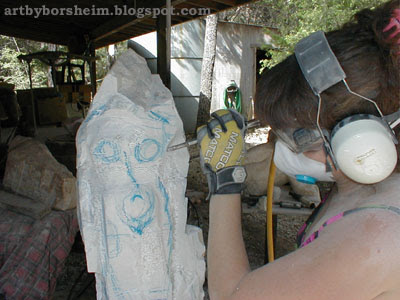 Here are a few images that I took back in 2002 of the beginning of my marble carving, “The Offering.” Strangely enough, the middle images were taken on my late mentor Vasily Fedorouk’s birthday, August 16. I had met him only one summer before and it is evident by the sloppy crayon drawings that I made on my stone, that I have not yet begun to learn much from him . . .

Vulnerability: strength or weakness? As is so often, context is everything. 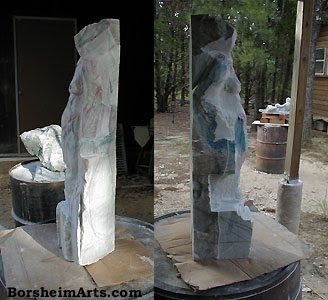 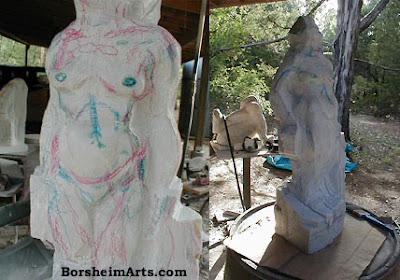 Posted by Kelly Borsheim Artist at 4:17 PM No comments: