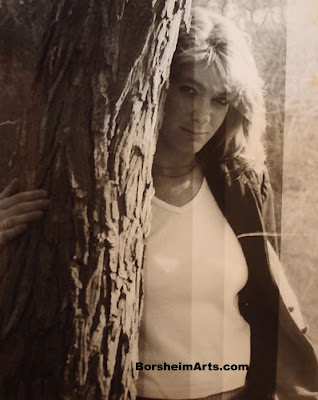 It must have been the fall of 1983 that I was told by a counselor that I had to take an elective at my school (then called “Southwest Texas State University” but now “Texas State University”). I visited this counselor when I decided that I did not know what I would do with my impending math major and also I was having trouble understanding the thick Chilean accent of my math professor. I changed to become an English major (with equally confusing future plans) and signed up for Black and White Photography course as my elective.

It changed my life. That moment in the darkroom when chemistry changed a seemingly blank piece of paper into an image hooked me forever onto the magic. My teacher for Photography 1450.2 was Mr. Roger Nuhn and he was really a great teacher. After this one class, I never took another photography course (other than restoration almost a decade later). Instead, I decided to “get a job in a photo lab to pay for college,” which I did in the spring of 1984. This was not the most financially brilliant plan I have ever come up with, but it did start me on my artistic career path.

Lately I have been doing a kind of spring cleaning – going through decades-old letters and art materials in order to lighten my load a bit. I am also rediscovering images that I took in my early adult years and could possibly use for future work. The reason that I write today, though, is because I also found a bunch of self-critiques that I wrote for this photography class.

I had always thought that my first 10 years or so of taking photos produced rather ordinary beginning images, but that it may have been necessary for me to do this in order to shape my own voice. These critiques are mostly typed and double-spaced on one side of the page, obvious homework, including the responses by Mr. Nuhn. What interests me is not only how specific and knowing my comments are, but also how negative I was with myself. I wonder if there was some sort of checklist that we were told to address in every critical analysis that we submitted. On a few, I would add a positive note at the bottom, more like a personal conversation with my teacher, but probably near the end of the semester.

Here is one example (with the teacher’s comments in the square brackets):

I’ll start with my shooting. I focused better this time. On Roll A, I forgot to check the ASA speed on the light meter. After Bracket 2 I realized I should’ve had the meter set on 400 (using Tri-X film). The same problem on Roll B -- only the reverse. I used Vericrome Pan and should have set the light meter for 125. [check]

Then on Roll B, I totally messed up Brackets 2 and 3. I don’t know what I was thinking when I set my shutter speeds. [check] The negatives are just too dark; the film was exposed too long. No excuse for it, especially since you told us in class to not shoot this exercise outdoors in direct sunlight! [check]

On the unmounted extra print “y” I think the depth of field may be too deep; [no - it’s shallow enough] but more importantly, the subject (the black camel) is not big enough. [check] Someone looking at this picture would probably not realize I was trying to emphasize the subject. [Right] The picture also needs to be burned in on the left side. [check]

Extra print “z” is too dark everywhere, except aroudn the candles’ flames. I chose not to use this picture as my mounted one because I don’t think it is clear (or even consistent) that that is a scale in front of the vase. [Right]

On my mounted print, I should’ve burned in the bottom area some more. [check] I had trouble with dust on my negatives, especially the prints from Roll B. It seemed the more I brushed the negatives off, the more dust they collected. My mounted picture is almost impossible to spot well, although I tried. [check]

P.S. I don’t like the glossy paper at all. It is too easy to get scratches and finger prints all over the picture. [Agree - but it is very good for find detail, high contrast subject matter.]

I also think it is funny that I apparently cannot follow instructions even when I understand them, although I also had no trouble pointing it out myself. Ha.

This image is of one of my test prints (probably not from the assignment in the critique above). You may notice the vertical lines as I moved the safety paper back to allow different amounts of light to expose the paper.

People occasionally ask me if I accept apprentices or assistants when I carve stone. Thus far, no. However, sometimes I get volunteers, as I have for the “Gymnast” marble project. Today was the first time “Tony” stuck around long enough for me to capture him on camera. Maybe it was the overcast and muggy day created by last night’s grand storm or maybe he is becoming less shy as the marble sculpture gets smaller. 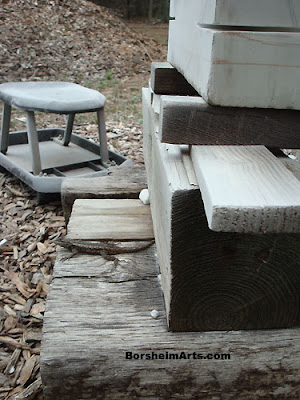 Tony is not as helpful as the assistant I had for over 15 years. But doubtful anyone could compare to Zac, even if he was a dog. Zac was more into accounting, I think. He always let me know when it was time to take a break to go for a walk or just do some belly rubbing. 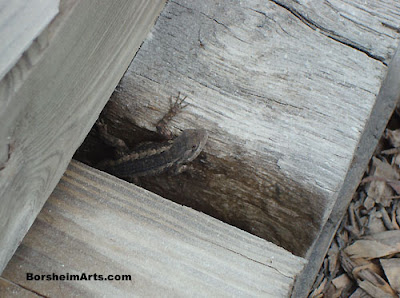 Tony has moved in closer than Zac ever got to my tools, though. He even stood still as I showered him with marble dust! He has some subtle spikes on his body and more busy patterns on him and an overall darker color than anoles. If you know what kind of lizard he is, I would love to know it. 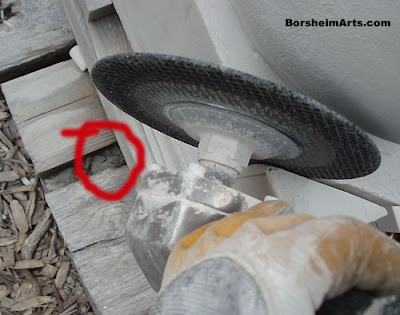 When I pulled out my 1-inch pneumatic hammer and some of Vasily’s chisels to try out as I began to shape the section under the gymnast, Tony bailed on me and ran to another block of marble nearby. I am not sure if it was the noise or the vibration that made him uneasy. However, the vibration was more than I remembered, even with my anti-vibration gloves.

And Vasily always said, “It’s not in the tools. It’s in the technology…” as he pointed to his noggin. Good point, always. However, a tool that feels good in your hand and works for you cannot be all bad. 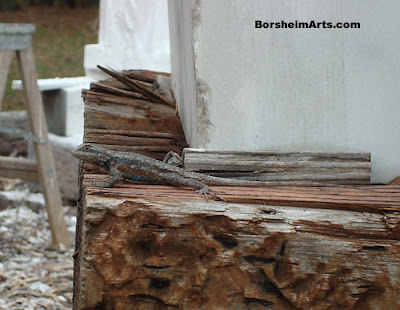 Posted by Kelly Borsheim Artist at 6:58 AM 2 comments: