Dear Art Lover,
I was delighted to take a break from carving my Pinocchio sculpture in the local stone, Pietra Serena.  Marco Nardini (of the quarry Cava Nardini in Vellano, Toscana, Italia) had received a visitor and he was great to share with me some of the history of the quarry.  This man Giovanni Cosci’s grandfather and his father had worked in the quarries years before, although he told me that the grandfather had a better talent with the stone than his father had.
He went on to explain some of the history of stone quarrying in this area.  After WWII there was a LOT of work, reconstructing roads and bridges.  Cava Nardini had another proprietor in those days.  After the roads and homes were rebuilt as needed, the labor force moved into the paper factories that line the river in this valley called Valleriana, north of Pescia in Tuscany.  Sadly, today there are only two paper factories left as the economic crisis eats up the futures of many Italians.

Giovanni said that Germano Nardini, Marco’s father, took a huge risk when he bought the quarry.  None of the shop buildings we see today, the office, or even the large flat area with is so easy to work in now existed back then.  Germano slowly and persistently created his new business with determined tenacity.  And his son Marco was soon by his side.

I love the descriptions of the quarry work from those post-war days.  Young sons would arrive in time to bring their fathers a lunch of coffee and bread.    One could hear, “Bimbo, vieni qui!” [Little boy, come here!”] once it was a safe time for the boys to enter.
After war, there was lots of work in many quarries in the area to rebuild after the bombings.  Later, the work dropped off and the workers moved to the paper mills [if my understanding of Italian was accurate].  Today, Cava Nardini is the only quarry is the area of Vellano, although there are a few others still in existence closer to Abetone.

Harvesting this hard grey stone (a sandstone) that you see in the buildings around Tuscany, including Florence, was not easy.  A man would climb up into the mountains, mind you, Giovanni clarified for me, not smooth and accessible the way the quarry looks today, but rough, rugged wooded mountains.  While hanging from a rope, a quarryman would have to slowly hammer a long [his hand motioned about a 2.5 feet length] stick of iron into the rock  He would hammer and twist and then remove the metal to take out the resulting sand.  Piano, piano, all while swinging from a rope.  And he would repeat this “hand drilling” until the hole was deep enough.  What difficult work, especially given the angles and suspension!  Many of these long thin holes had to be hand-drilled into the stone mountains along the lines in which another quarryman had determined the cut should be.

The holes were then filled with explosive powder.  The men near the holes, once ready, would then holler to the man below, “La Mina!”  That receiving man would then yell to those below him, “La Mina!”  Each man below another would continue this message to those further down the mountain.
When I asked Giovanni to repeat the phrase that the men yelled, he said, “La Mina!” [literally, “the mine”].  Marco interjected at this point, “As in the [bombshell] Italian singer, Mina.”  She, Mina Anna Mazzini (born 25 March 1940),  is still quite popular today.
https://it.wikipedia.org/wiki/Mina_(cantante)

After passing the message down the mountain, each man would take cover or at the very least stand directly behind a tree.  Five minutes later, the fuse was lit and the bomb was heard throughout the valley as the stone was released from the mountain block.

Germano is now 83 years old, but you would not know it so much.  While his son Marco runs the quarry, Germano is often around, at least when my friend Kumiko and I have been there.  Germano still operates the large machinery to move or break pietra serena into uneven blocks used by the muratori (wall builders) for homes in the valley.

Germano is helpful and always joking.  He offers advice when he sees something he thinks we can improve upon, including staying cleaner by using the traditional paper hat, creating several for each sculptor in our symposium.  He is someone we all like and respect, even though he asked each of us at one point or another, “Did you learn nothing in school?  Must I teach everything?”   ahha.. He even rakes the stone chips away from our sites to help us not trip over them.  On the downside, he does suffer lung problems because he has breathed in too much stone dust.

++++
Although these links are to sites in Italian, Google translate is enough to give you some more insight into the history of marble and other stone quarrying processes in Italy.
https://translate.google.it/

Good page for marble in Carrara, the Lizzatura [moving the marble from the mountains to the sea, re-enacted each August or perhaps every other year…it was this year on August 7, Sunday], and includes historic images.  Especially interesting is the description of “Apuan Alps - The lizzatura the Monolith took place in November 1928” [30 pairs of oxen and 6-month’s journey to reach just the town of Carrara, with some slopes as steep as 60%!  It arrives at the sea port almost one year later], as well as the story of the poet visiting during the explosion on July 14, 1907.
http://www.toltedalcassetto.it/lunigiana_apuane_3.htm

Posted by Kelly Borsheim Artist at 10:25 PM No comments:


Dear Art Lover,
One of the perks of working at the quarry (besides being in the mountains all day!) is introducing children to this life. While they cannot do much for safety reasons (and my safety goggles are too large to protect a child's face), it is wonderful to see their responses to sculpture, giant machinery, and the stone quarry itself. Here you see a young gal working on my stone carving of Pinocchio and then Marco Nardini (of Cava Nardini in Vellano, Toscana, Italia) helping the children experience a real driver's seat!  [Cava in Italian means quarry.] 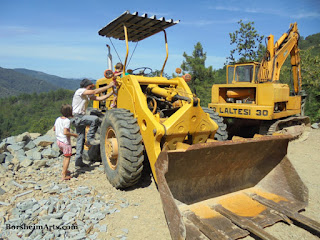 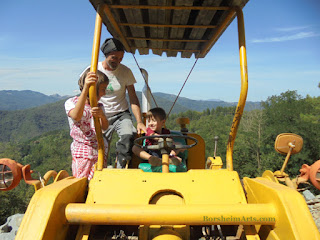 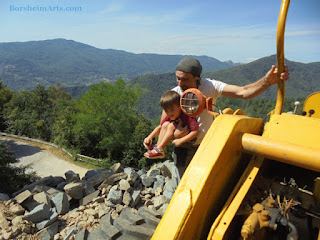 Posted by Kelly Borsheim Artist at 2:30 PM No comments: