I took a night train from Florence, Italy, to Vienna, Austria. I was fortunate to have a friend tell me about trenitalia’s SMART card, which got me a ticket for less than half the normal price. I only had two days in Vienna and I came to see artworks of Gustav Klimt and Egon Schiele. 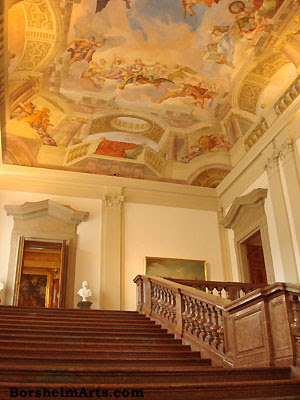 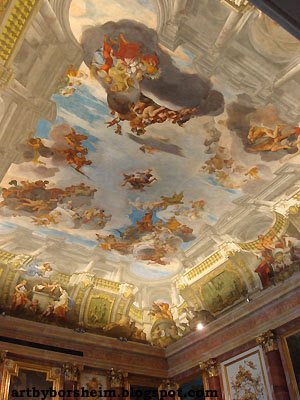 I was kind of creeped out by the loveliness of this detail shot in the ceiling painting. The subject of the painting is not so lovely. A woman is pouring something onto a man being tortured by putti. Maybe I misunderstand because I know not the story, but I think that if she were helping him, she would be physically closer to him.
Still, with these colors and composition, the emotion seems quite tranquillo to me. 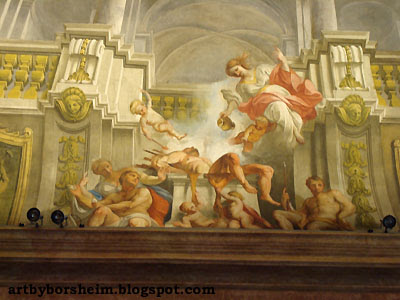 These next two images were not supposed to have been taken, but how could I not? I mean seriously, this marble sculpture is beautiful and intelligently designed. The motion in the babies, incredible and the stone touches in enough places to keep the material supported. 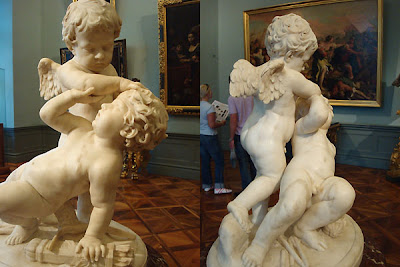 This marble carving inside the Liechtenstein Museum in Vienna is by Alessandro Algardi in 1630. Titled “Eros and Anteros” the statue depicts Eros removing the blindfold from his brother Anteros. The accompanying text that I read from other works explains that Eros represents the god of heavenly love, initiator of all conception. Anteros represents Earthly love (which is why he has no wings), and is the god of unrequited love or spurned love. In art Anteros often appears in the shadow of his brother Eros. The leaden arrows of Anteros represent carnal, earthly desire, whereas the golden arrows of Eros represents the love that conceives children.

Really, we have lost (or at least I have never learned) our abilities to read a painting. Allegory was big in the former days of art. I enjoy learning more about these things that are our eternal struggles and joys.

I do recommend this museum in Vienna. Unfortunately, the day that I was there, the gardens behind the museum were closed for a private party for a bank. It looked to be quite the affair . . .


For more information, visit the site of the Liechtenstein Museum

Or this other site on the Palais Liechtenstein 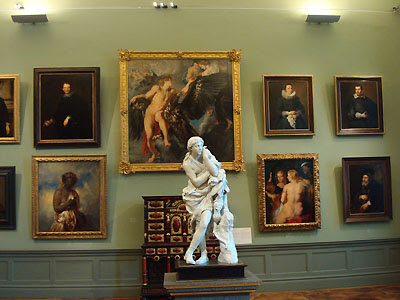 Posted by Kelly Borsheim Artist at 6:30 PM No comments:

The 24th of June was the festival of San Giovanni (St. John), Florence, Italy’s patron saint. I was street painting that day with my colleagues Johnny and Lalu. We chose to draw a copy of a painting by Pietro della Francesca, I believe. It depicts Jesus being baptized by Saint John. I show you a detail here of the work-in-progress.

Naturally, there was a parade through the center of Florence. I caught some of it on film in between drawing time. I love the expressiveness of this one man’s face as he points to one of the parade viewers. 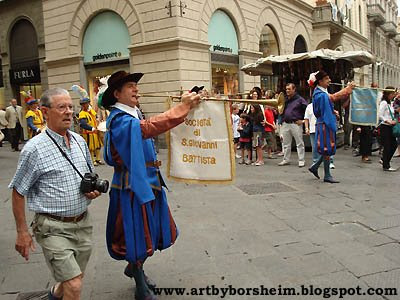 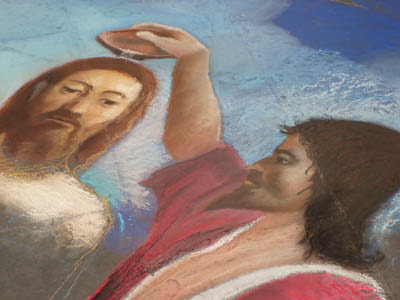 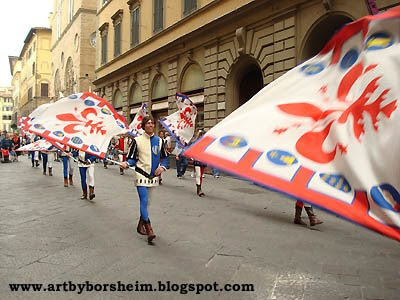 On Day Two of our two-day pass to paint on the street, I arrived to discover that all three drawing spaces were occupied by Italian school children. Although I found them charming enough to photograph, I was not too amused professionally. For one, some of my colleague Johnny’s friends had come by around midnight the night before and invited us all to go to a nearby pub for a bit. Needless to say, I was not happy to have gotten up earlier than desired for no reason.

While our group paid for permits, apparently since 31 May, we have been paying the police. The teacher for this class, however, paid the Comune (Florence’s City Hall) and had more rights to draw than the madonnari did. The teacher assured me that they would be finished by noon. Since I was not prepared for this surprise, I did not have all of my street painting tools with me. So I asked if she would please wash my square again before she left (the drawing from the day before having been already removed).

The sun is normally straight above us until 2 pm, which helped to dry the street, but was not the condition that I wanted to start drawing in. So, I got a late start, but Johnny later joined me. I had chosen a Raphael painting, “Madonna of the Chair.” hoping to make a connection with a more recognizable (and for me fun to draw) image. Lalu was not working with us today, so Johnny took the left half and I the right.

This turned out to be a fun day and I got practice drawing babies. We did not have time to finish, but with all of the weird happenings of our day, we decided to just try to enjoy ourselves a bit. This last image was taken around midnight once we stopped working. In the foreground you can see some Persian language written by a very charming Iranian mother visiting Florence with her grown daughter and son. They wrote something to the tune of, “Kelly, this is a lovely painting.” Meeting them was one of the day’s highlights. 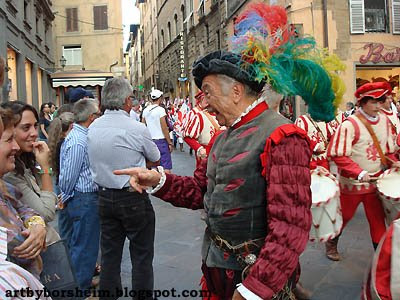 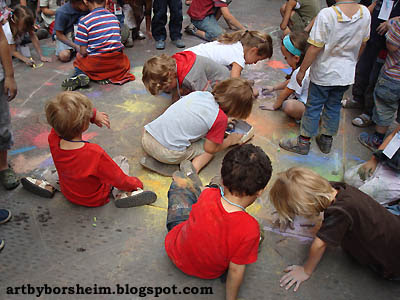 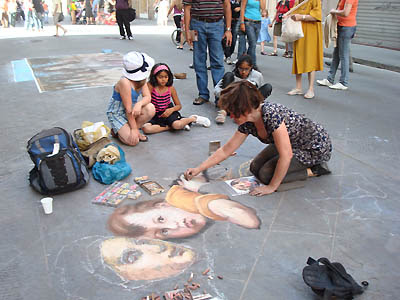 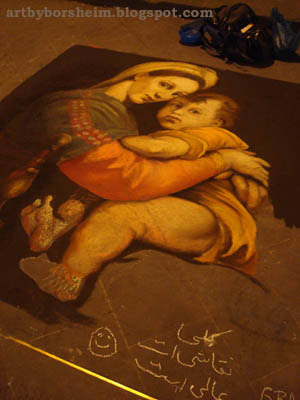