Continuing my last post about stone carving the angel, my next step was to start creating the form of the figure. On bodies, I long ago discovered that I need to start with the hips and legs and then work the other parts of the body to fit those. Not everyone works in the same way. One of the perks about creating art is that you discover how YOUR brain works. You learn so much about your unique way of experiencing and discovering the world around you, how you take information in and how you express yourself.

Thus, I began to shape the pelvic butterfly a little and then the upper thighs of the angel. Only to find more problems in the stone when I found cut into some of that orange crumbly layer that will probably cause me more grief than elation on this piece. You may see this orange inclusion in the figure’s right thigh. 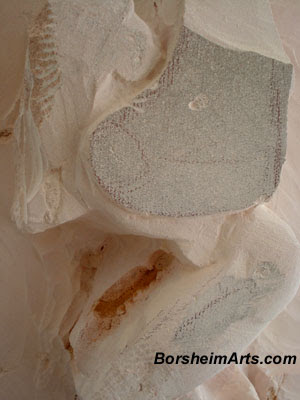 I had designed the legs to be of slightly different positions for more interesting shapes. Now, the only choice I had was to move that back thigh lower, below the problem area in the stone. That, of course, would affect all of the other relationships, especially the length of the lower part of the leg. However, I realized that since my angel was no longer a bas-relief, but instead 3-d, I could make up this shortening by angling that leg in a different way. This meant that I will need to change the position of the heel of the foot, but I think that I have enough stone to be able to do that.

More as the stone carving develops . . .

And for those who celebrate Easter, here are links to some of my previous postings about Pasqua in Florence, Italy: 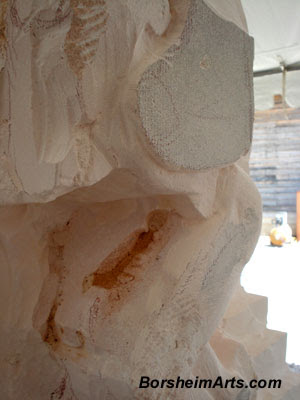 Posted by Kelly Borsheim Artist at 7:34 PM No comments:

I wanted to show you the progress I made since my last blog post about my stone carving of an angel. This art project in a pink limestone (from central Texas) was for the Old World Stone Carving Competition at The Vineyard at Florence in central Texas.

I had started off thinking that my angel carving would be in bas-relief. Bas-relief is not simply flattened shapes cut out like a puzzle. Instead, it is compressed FORM. In these first two images, you may see that I cut away the stone around a compressed angel figure. In the second image, the stone is reclining on her back on the table, while I am standing at the top and have drawn in the shape of the compressed skull of the angel. Notice the narrowness towards the face while the back of the skull remains wider. 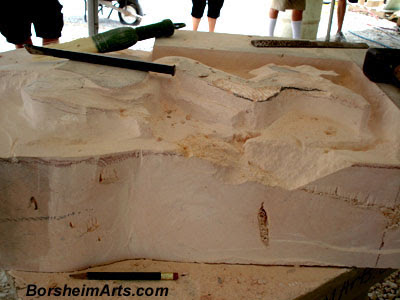 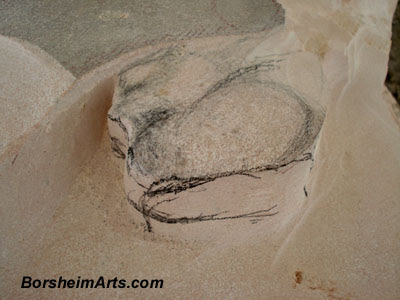 I do not normally work in limestone and have never worked with the pink. While carver extraordinare Bob Ragan told me that it is possible to get pink limestone without the random crude I was seeing in my piece, I am still stuck with this stone’s genetics. And so, in the first image.you may see that even though I had cut a safety score along a straight edge that I wanted, when I chipped away at the limestone, a huge chunk broke away, stopping along a line of orange inclusions in the rock.

Typically when I see problems like this, I cut them out and redesign. I am a direct carver, so I draw what I want to do on the stone and then carve parts away that are not in the design. At some point, I began to finish the stair concept in my head and also realized that since I wanted to carve a piece that will have something all round, the bas-relief idea would make the angel look weird from side viewpoints. As it often turns out, the solution to one problem also is the solution for another.

I had hoped to cut another layer into the stone that was deep enough to create an angel in the round while also removing most of the defects in the stone. I was getting tired and also, the competition day was nearing an end. Since I was staying at the mayor’s home, I needed to stop carving so that I could follow her there. So, I stopped that first day by making score marks and safety cuts (to protect the angel, stairs, and sun disc) and left the removal of the stone for the next morning. 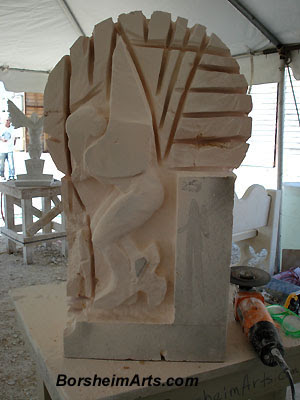 Day 2: I removed the stone and cleaned up the edges a bit, carved the stairs in roughly. This allows me to move the piece along as a whole. I find that often there are subtle changes in the design based on the rock’s personality, but also as my mind sees how things are working together, or not. 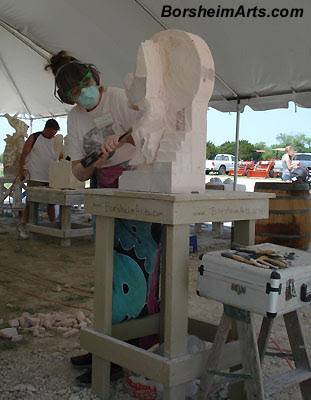 In this final image, you may see that the soft orange “seam” appears again, this time between the angel figure and the sun shape behind her. This naturally will affect the positioning of the angel and also how I carve. Limestone is very soft and also, a carver normally works three sides, leaving the fourth as “insurance” in case something breaks and all needs to be pushed back. It is very challenging to try to create a form, without too many undercuts (up to some point in the creation) in case you encounter a surprise and need to carve around this. That is probably why stone is my drug of choice – challenging and intelligent collaboration.

PS. I could still use your daily vote to help me win $2500 to pay for a bronze casting foundry bill… go here (http://kellyborsheim.see.me/aw2011) and click on the star of your choice in the upper right (left start is a low 1 while the rightmost star is a high 5 score). Voting continues through April 20. Thank you so much! 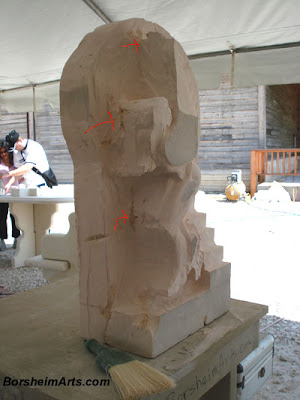