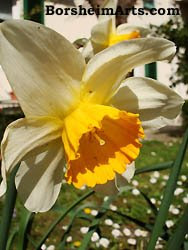 Buona Pasqua or Happy Easter, as you wish. Since I am still very busy working to finish several paintings and drawings before my solo exhibit opens this Thursday in Florence, Italy, I will leave you with the following.

Last year, I wrote about the “Explosion of the Cart” that happens each Easter between Florence’s famous Duomo and Bastistry. To find out the connection between explosions and the religious holiday of Easter, please click on the link below.

I also want to leave you with a few of the snapshots that I have taken of Doria and Luca’s garden. I feel fortunate to live with them. And finally, the full moon as I saw him over the Porta San Niccolò along the Arno River the other night. Enjoy this weekend and now, I paint. 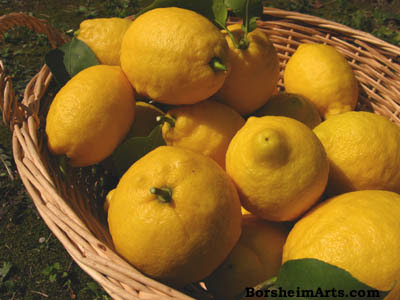 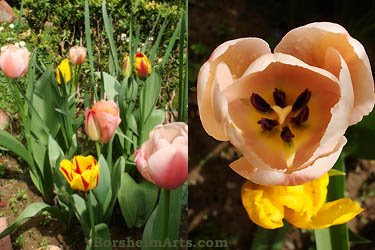 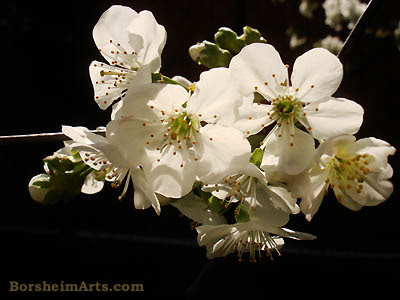 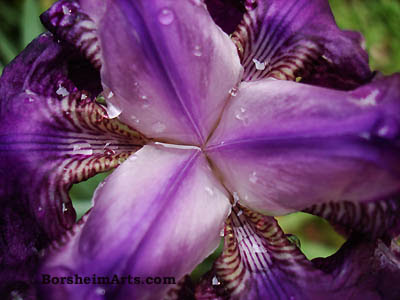 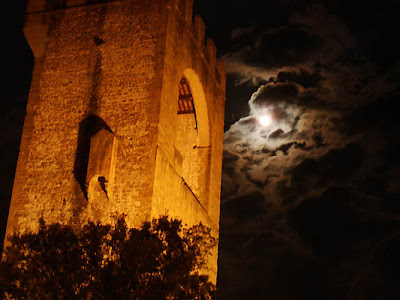 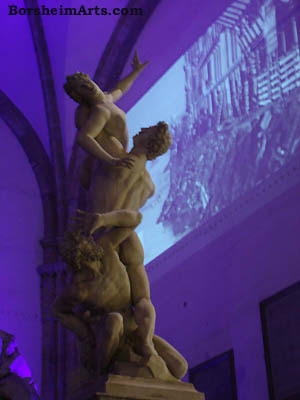 I mentioned sculptor Giambologna’s famous composition “Il Ratto delle Sabines” in my last post. It is one of my favorite sculptures. The final artwork is in stone and is one of the few original sculptures still on exhibit in the main piazza of Florence, Italy. Unfortunately, that public privilege keeps getting debated as more pollution makes it difficult to protect the marble.

Also, vandalism reared its ugly head recently when someone broke off a finger from Italian artist Pio Fedi’s marvelous stone carving of four figures, which is also one of the original artworks still on exhibit in this same space, the Loggia dei Lanzi. The discovery of the finger nearby is what clued in authorities about the damage. Horrible.

Back in 2004 during my first visit to Florence, I saw Giambologna’s original clay sculpture that was later translated into marble in the Academia. He was seeking to create a perfect composition in 3-dimensions. The spiral was the answer. The composition as seen from each viewing position would entice the audience to want to see what other views were offered. 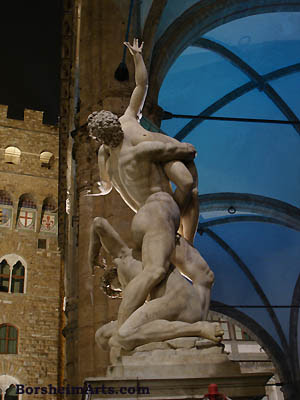 As an artist it made sense to me that Giambologna did not start out with the famous (in his time) story of the abduction of the Sabines as his tema (theme). Someone suggested this titolo later and Giambologna had to design the bronze bas reliefs depicting more of the story for the tall stone base of his original sculpture.

Yes, sometimes the titles come first, but just as often, they come afterwards, or even during the creation of art. As visual artists, we communicate with a different language that consists of visual and tactile elements, such as line, shapes, tones, and texture.

The images you see here were taken at various times over the course of several years. The first one shows Giambologna’s “Il Ratto delle Sabines” in front of a projected image taken during the famous flood of 1966. I took this during the 40th anniversary event of the flood, November 4, 2006. 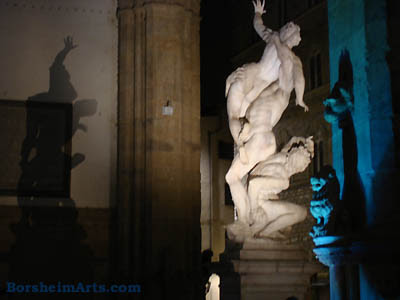 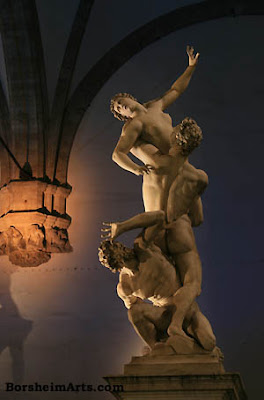 This last image is part of my giclée fundraising series to help the young man Rudy Sanchez that I have mentored since 1992. Rudy was born with Treacher Collins’ Syndrome. Years ago, the facial reconstruction doctors removed the last of Rudy’s teeth in order to reshape his jaw. However, through some Medicare law, teeth are considered cosmetic and therefore optional surgery (not paid for). So, Rudy needs $13,000 for a complete set of teeth. His family does not have that, nor do I.

If this image or any of my Italy images appeal to you, please consider purchasing a giclée or more (quantity savings apply) and know that your new artwork will enhance more than the lives that you share the art with. For more information about the art and about Rudy and Treacher Collins, please visit: Treacher Collins’ Art Project

Thank you so much!

Posted by Kelly Borsheim Artist at 12:56 AM No comments: 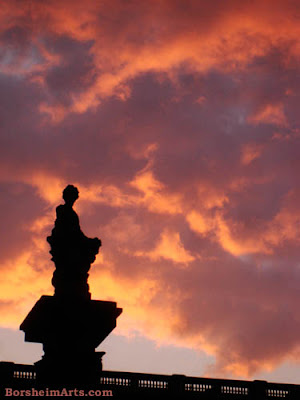 My head is often in the clouds. I wish that I could fly.

Florence, Italy, receives great clouds and has interesting silhouettes with which to frame them. This first image was one that I took last night. I am ever grateful that I had to go out to buy more art supplies for my current projects and that I timed it so that I had a half an hour after all the stores close before meeting a few friends at Rex’s on Via Fiesolana for aperitivo. Otherwise, I would have missed last night’s skies entirely.

This lovely sunset image was taken from Piazza della Repubblica. What wonderfully abstract shapes make up this sculpture on top of the obelisk! I should know more about this work but, to parody Star Trek, “I am an artist, not a tour guide!”

The second image was taken the evening before from the street outside of my room after returning from the grocery store. 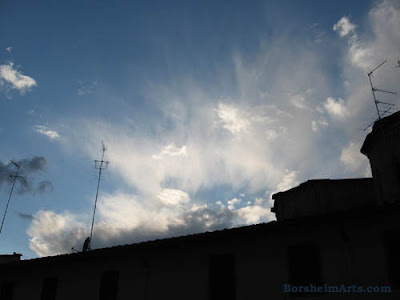 And this third image was taken on New Year’s Day as I sat in the Loggia dei Lanzi wondering how long I should wait before heading over to Skye’s flat in the zona di Santo Spirito to retrieve my gloves and hat. [As it was, I arrived about 5 p.m. and she was just waking up from our previous night’s revelry. Heh.]

The silhouette of the head peeking out on the right is part of Giambologna’s magnificent sculpture “Il Ratto della Sabines” (The Abduction of the Sabine Women). Many people mistakenly translate ‘ratto’ to mean ‘rape’ but it does not. “Rape” in Italian is “violenza carnale.” In the Italian language, at least, there is no confusing rape with a sexual act. The verb “to rape” is “violentare” -- to commit violence upon someone.

I guess my head is not in the clouds now.
Scusami for my meandering thoughts. 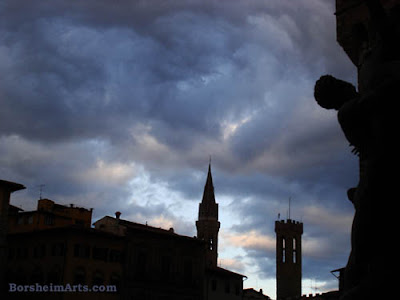 Posted by Kelly Borsheim Artist at 12:59 AM 2 comments: