Cari Amici (Dear Friends),
I recently got the opportunity to try my hand at portrait painting again.  I hired Vanessa, the sister of the gal who modeled for my “Tuscan Mural” last year, Anna Rosa.   This time I tried to do my version of Sight-Size (which means more drawing and less leaning) and with natural light.  The window in my studio which has the north light is at my back.  I was sharing the model with my studio-mate Roberto Castellini.  He painted with his canvas on the other side of the model.  I was on her right. 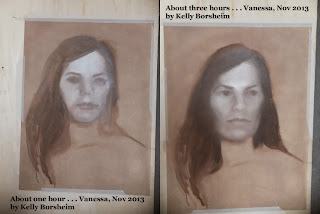 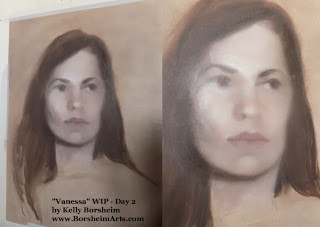 I got a bad start, as you can see on this first image (left side).  I was not too fussed, really.  I know that I tend to draw short fat faces, like my own.  We all tend to draw ourselves or our families’ forms since those are what we have seen the most and maybe there is a deeper connection as well.  I was also trying to emulate my favorite painter, Eugene Carriere.    So, I was constantly using a fan brush to keep everything soft and ghosty looking.

Once I got something on the canvas, I then started to refine the shapes.  Note that I was painting monochromatically.  I wanted to get my shapes closer to good before attempting some subtle colors.  But halfway Day 2, I started adding some skin tones, still leaning towards monochromatic vs. very colorful designs.

I struggled with the glare from this northern light onto the oil.  The photography task was not much easier than seeing my painting as I worked. 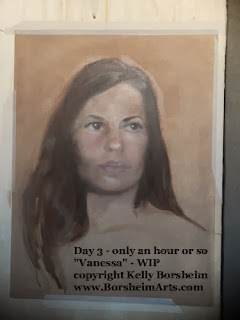 I missed plenty of model time since my lavatrice (washing machine) broke and thus, I had several meetings with the landlords as they came to check it out and then meet the technician for the installation the next week.  However, Roberto decided Thursday evening that he wanted to start the next morning on a drawing, putting his painted portrait aside.  Since I was not enjoying the glare situation, I suggested that we move the position of the model on her stand to a diagonal place that he and I had discussed before.  That meant, however, that the model’s face would be more in shadow.  Still, I would rather change partway through than continue painting in a reflective situation.

You may notice in the fourth image that I have a tendency to try to fatten the face despite my earlier corrections!  Sometimes one must fight one’s natural tendencies. 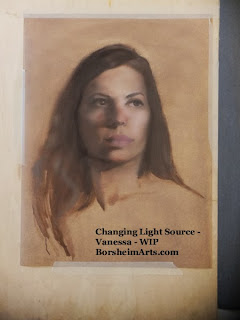 I had one more 3-hour session with the model Vanessa after this last image was taken.  I tried to refine the lips and also work in the shadows a bit more.  I was hoping to be satisfied with my efforts.  While they were not bad, this work is no masterpiece.  And thus, I should keep at it… 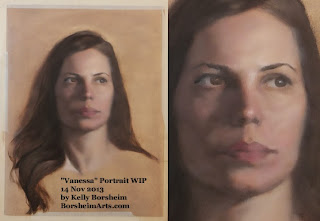