Here is another “Boobs on a Platter” painting. Not sure why I am fascinated by these, perhaps because the whole thing seems so bizarre to me. In this painting of Saint Agatha circa 1838-44, a woman holds a sharp scissors in her hands as she gazes out of the canvas. A platter with two nude breasts on it (perky, perfectly round, and looking up!) sits on a surface in front of her. She is lushly draped and beautifully rendered.

Long ago, paintings sometimes included a timeline of a story in the imagery. For example, the main large scene in a work might depict one specific moment in a couple’s life, while a background image of the same couple was intended to show either the past or the future. This technique of repetition of subjects was understood and read correctly by the art-viewing public. 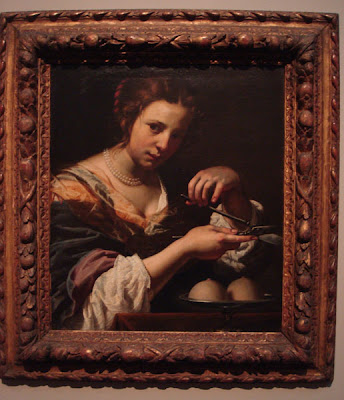 In the case of this portrait painting by Lorenzo Lippi (Florence, Italy, 1606-1665), his subject Saint Agatha is a whole woman. However, the “platter of boobs” is a repetition that gives the viewer a clue as to the horrible future of torture that awaits her. How would you enjoy severed (or any) boobs being your identifying symbol?

This oil on canvas painting “Saint Agatha” is part of the Suida-Manning Collection in the collection of The Blanton Museum of Art in Austin, Texas. It is a gorgeous painting and still in very good condition. Here is what they have posted next to this painting:

“Agatha was an early Christian martyr whose fate is here made vivid. The vividness owes not just to the cruel evidence of her torture: the picture’s scale, sharp illumination, and alluring psychology make the subject intensely present and engaging. Routine in portrayals of the kind, Agatha’s attributes and apparently unharmed physical condition here seem inconsistent and disturbing. The painting’s lovely design, rare hues and transparent layering of pigment in the draperies stand in further ironic contrast to the ostensible subject.
Half-length female figures of devotional or allegorical subject but incorporating such prurience were popular in mid-seventeenth-century Florence, partly as a conservative response to the extroverted, fully Baroque decoration of Pietro da Cortona in the Palazzo Pitti. Lippi cultivated is own idiom by returning to the precise description and sterling character of Santi di Tito’s paintings. Previously attributed to Orazio Riminaldi, and earlier Caravaggesque painter active in Pisa, this Saint Agatha has been recently been described as “one of Lippi’s most fascinating religious personalities.”


I was delighted to have been selected by artist Michael Guilmet to have one of my paintings (Songbird) featured in his video series “Feast Paintings” This is the Spring 2011 video.
http://www.feastpaintings.com/
Enjoy!

Posted by Kelly Borsheim Artist at 7:16 AM No comments: