Almost two years ago, on New Year’s Eve, I was outside here in my Texas studio carving on the marble “Gymnast.” It was starting to get dark, and then I realized it was getting darker than it should be for that approaching dusky hour. I felt the sudden change around me. A frisky wind whipped up. The air smelled cold and crisp. I remember laying down my tools and running over to the field, the only place in which the trees give way enough for me to see the sunset better. Even then the orange glow of the setting sun was broken up with the ragged silhouettes of treetops. It felt magnificent!

I cannot really explain my excitement. It was energy that I simply absorbed from the surrounding fragrance, wind, temperature, color, and light. I remember shouting, “Come look at this sky – it is fantastic!” No one came. I learned as a child that it is amazing to see something naturally wonderful, but so much better to share the experience with someone else. And thus, I decided that I would try to capture in a painting the excitement in the dark clouds that seemed to funnel the light of the falling sun.

I started the painting that night, sketching it out onto the largest canvas I had on hand. But life and other projects took me away after that magical evening. The canvas of clouds remained untouched for over a year. Each time I looked at it, I felt that I had failed to capture the smell of the fresh air that night and I began to doubt that the painting would mean anything if it were just another sunset. Over time I realized that I wanted to add something to it, but could not think of anything that was not overly contrived.

And then it happened . . . divorce has some perks. I have been living a life in transition, or at least limbo, for a long time now, but 2011 has been the year of action and stepping away. This spring the idea for my painting emerged as quite natural. So many of my artworks have been personal and oddly, perhaps, those seem to be the ones most admired among those who share their thoughts with me.

I am losing my home and my studio. However, my former husband John, who has been a dear friend to me for about half of my life, has let me stay in his home this year so that I may have the time to finish my stone carvings, pack up, and figure out my new direction. I started this spring by sorting through our photographs, including our wedding album. And it made sense for me to incorporate my favorite wedding photo into my art.

Finding the universal through the personal has been my approach for much of my art career. And it became my hope that my painting would not necessarily be seen in a negative light or even give-off a negative feeling, in the same way that my bronze “Together and Alone” has not.

As I created this newer version of my painting, I wondered about her title. Ultimately, I decided that the original title “New Year’s Eve” was perfect. The phrase references an ending in the terms of a beginning. So, with no further delay, I introduce to you my newest oil painting (30” x 40”) called “New Year’s Eve.” 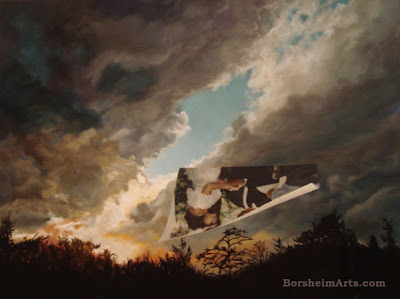 You may see this work and many others at my solo exhibit going on now:


“Places and Poses: the Art of Kelly Borsheim”

Book Signing: "My Life as a Street Painter in Florence, Italy"
Full-color book with 330+ images
By Kelly Borsheim
Saturday, 12 Nov, 2 to 5 p.m.

I hope that you can make this exhibit because after it closes, I will be leaving Texas. No doubt I will be back at some point, but I cannot promise when. I will be heading off first to North Carolina to visit family, then Florida for the Art Basel Miami and more family. Then, it is back to Italy. It is a new day.