In my last post I showed you a few images I took of the Church of Santa Trinita in Florence, Italy.

Almost every church that I can remember entering in Italy has more than one altar. In fact, the sides of the churches seem to have many different “mini-altars” creating – for me – almost the feeling of “information overload.” I mean that in a good way, in that almost all of these altars have an individual function, often dedicated to one specific holy identity. Each is filled with art. What a great collection any one church has! 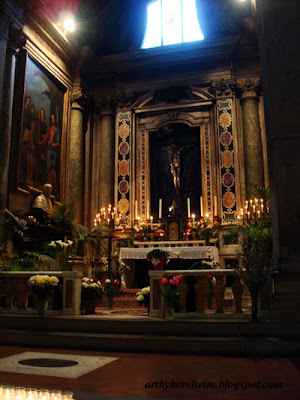 I include here a few images I was able to take before being told not to take images. See how each of these altars, viewed separately, has its own personality? One is quite elaborate in its decoration, another relatively sparse. Sometimes the space lies behind gorgeously designed iron gates, to be opened upon invitation or a special event. Each is lovely and quite tranquil. 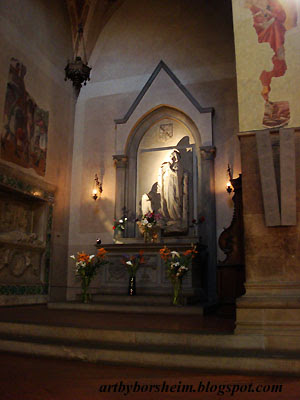 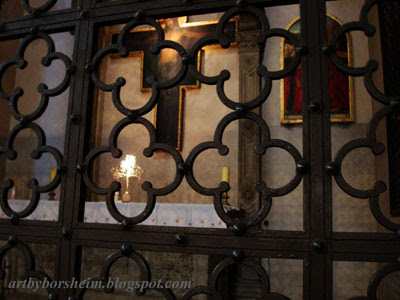 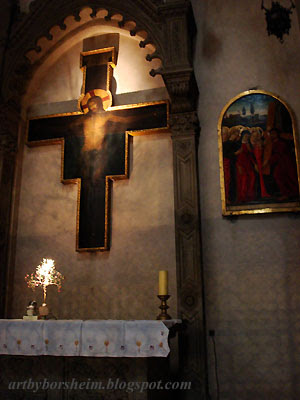 Posted by Kelly Borsheim Artist at 11:33 AM 2 comments:

The Church of Santa Trinita is across the river from my flat in Florence, Italy, not far from the ponte (bridge) by the same name. It is easy to recognize because of the figurative relief sculpture on the front of the church, above the door. 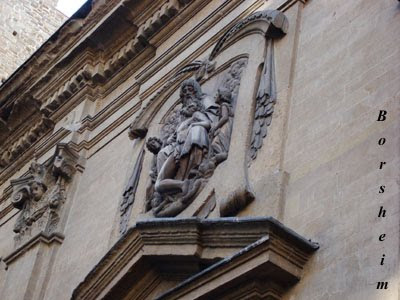 In this second image, I wanted to give you an overall feel of the inside of Santa Trinita. I really love the architecture in these Florentine churches, especially when the stones are alternated in color between the green and white marbles. And the frescoes on the ceilings and high on the walls always impress me with their magnitude of effort, if nothing else. 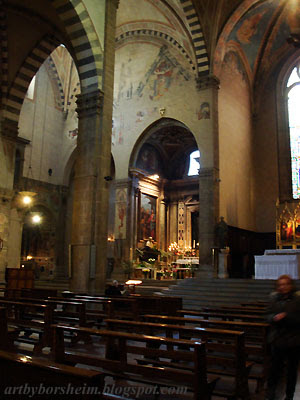 The Church of Santa Trinita appears to have it all: stained glass, frescoes, mosaics in stone (on the floors and walls), lovely arches, sculpture (of course!), fire, and paintings in several different styles. 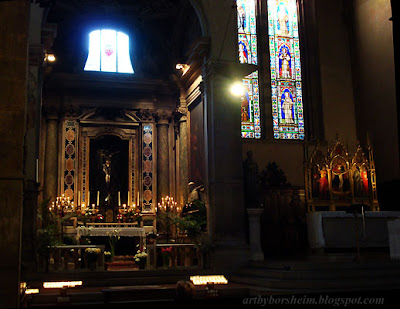 The area behind the altar was open to tourists when I first arrived, but by the time I had walked to the back, a priest was shooing everyone out and closing off that part. I hope you enjoy today’s photos. I will be writing more about this church in the coming days. 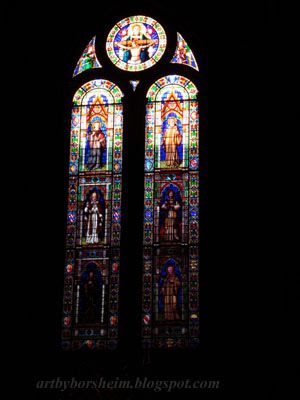 Two years ago, I passed my first Pasqua in Italia – specifically in Florence (Firenze). I wrote about the parades and the Scoppio del Carro (Explosion of the Cart) here on this blog. Last Easter I was also in Firenze, but I was so busy preparing for my solo exhibit here that I missed out on all the festivities.

Last spring in Florence I met Lili, one of my blog readers. She and her sister Lucrecia had a wonderful time enjoying the Florentine Easter celebration and clued me in on a little known event: the blessing of the Crusadean relic. This year, it was my goal to see another part of the Florentine holiday.

So my flatmate Amit and I met my friend Susan at the Ponte (Bridge) San Trinita and walked across the Arno River to the Piazza del Limbo and into the Chiesa del Santo Sepolcro. It is here that the flintstones awarded the Pazzi family after the Crusades are blessed and then used to light the Holy Fire. 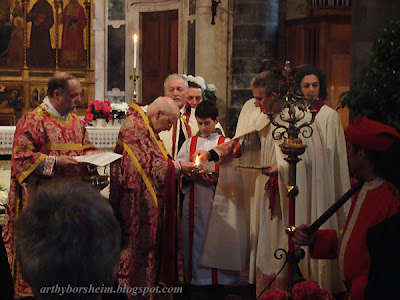 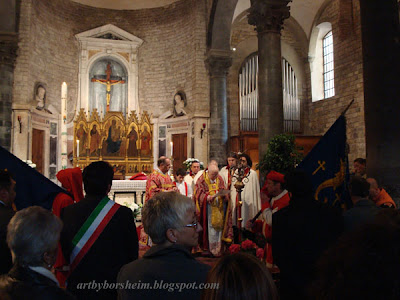 Now, just a disclaimer: While I subscribe to no religion of my own, I am not totally insensitive to the thoughts of others. There were a lot of cameras around from the press and other Italians and maybe a few strainieri (foreigners).

In the second image, the man on the left wearing the banner of Italy’s colors around his chest (with his back to us) is the Mayor of Firenze. I remember him campaigning last time I was here.

I had a strange feeling this year. While inside the church and as the mass was wrapping up, the parade of drummers outside arrived. The rhythmic cadence seemed loud and penetrating to me, while at the same time hypnotizing. I felt transported back to World War II and wondered if this was something close to how it might have felt to be in an old stone building while bombs and shots began to be fired all around you. Well, maybe I should not allow my mind to wander in church!

After we all left the church, the relics were paraded down to Palazzo Strozzi, where they joined the parade for the special cart. I have only included the photos up to the point in which both parades came together. Although the explosion was a little bit different this year, I did not stay long. Perhaps it is because I was so tired after having gotten up early to attend a church service or maybe because I am still adjusting to a life with people (when in Texas, a large majority of my time is spent working alone), but the crowds this morning made me feel … annoyed and a bit bored.
So, if you would like to read more about the Explosion of the Cart, visit my blog entry of Easter 2008 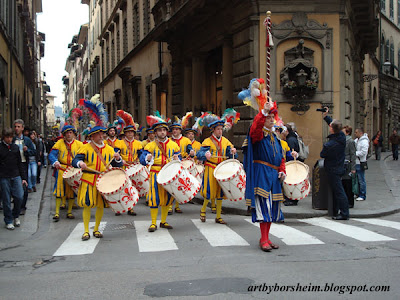 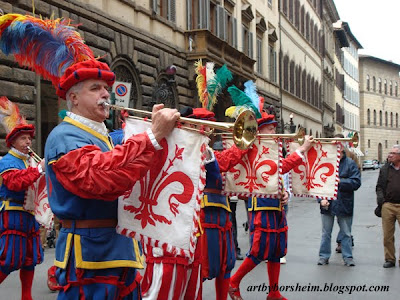 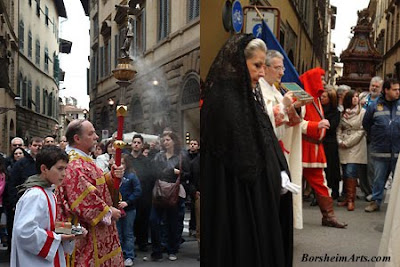