Drawing the Light in Florence Italy

Always searching for light and interesting people, here is another sneak preview of a new work-in-progress. This is Day 2 of a nude figure drawing that I am creating in charcoal and pastels. I hire the models, while my friend Dana hosts our drawing sessions in her flat. Her house is fun to work in because the lighting is so different from the other studio we work in.

Our Italian model Sarah took this photo of me during the break. The blue light is coming from the sunlit curtain covering the only window in the room. So, I draw coolly, ha. 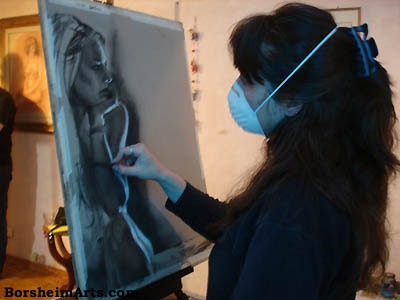 After our drawing session was over for the day, I rode my bike down Borgo degli Albizi to visit my favorite paper shop. I needed to buy a gift on Saturday night because most shops are not open on Sundays and I wanted to stay home to work on Monday and Tuesday. I try to organize my time well since I am a slow producer and interested in too many things.

But, this past Saturday evening, the light in Florence at this moment was truly fantastic! With these medieval tall buildings so close together here in central Florence, it is difficult to take good photos. The sun just does not arrive fully on most streets.

But in this moment, the sun was highlighting the Tuscan golds on this old building. The crumbling fresco designs looked purple in comparison. I snapped several shots of this wonderfully textured and richly colored wall, admiring the contrast of the round upper windows over the rectangles and the sculptured shield jutting out away from the mura. The composition I include here is my favorite shot and if you click on the blog’s image, I believe you can see a larger sized visual.

So, remember to look up and appreciate the light.
And if you are coming to Florence, Italy, soon, my exhibit starts on the 16th of April and lasts for three weeks. For more information, please see my Web site. 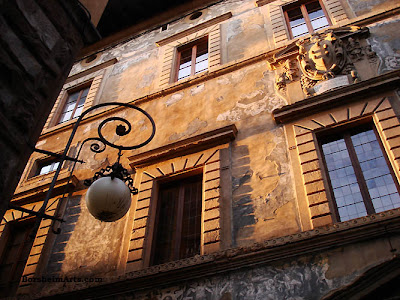 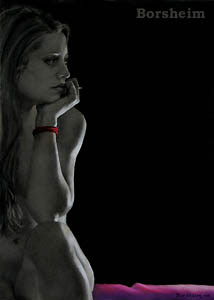 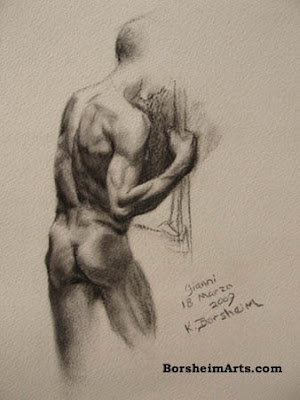 Sometimes an artist gets lucky and works with a model that has almost no fat. It is like having a living écorché! Italian-born Gianni is like that. Gianni has been an artist’s model for many, many years and on both sides of the Atlantic. He says he does not work out much, but he has always had this physique. I tried to capture the feel of his muscular form, but in the brief time that I had, I know that I left out so many nuances of shapes in the back.

Still, I really enjoy this original drawing, in part because it reminds me of historical drawings of male nude figures.

“Gianni – 18 March 2009” is an original drawing in charcoal on Arches paper. This paper is strong with some texture and very lovely. The dimensions of this nude figure drawing are 28 x 18 cm (approximately 11” x 7”). He is currently available for $150, which includes free shipping from Florence, Italy.


Thank you for your interest and support. 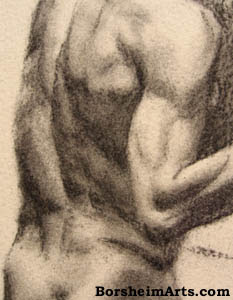 Plus, I thought this was of interest from my weekly e-mail from artsjournal.com:
Article: Arts World Weight-Sharing Techniques (How Artists Can Help Businesses)
http://www.thebulletin.us/articles/2009/03/18/arts_culture/doc49c0d3b88e20e987634465.txt

Posted by Kelly Borsheim Artist at 3:01 PM No comments:

This past Thursday evening, I had picked up the flyers and invitations to my solo exhibit here in Florence, Italy, and was riding around on my bicycle delivering them to local businesses in which I knew the people there. Then I received a phone call from Myrna Meza. She and her husband Juan were visiting Florence for only one night and half the next day and wondered if I could spend some time with them.

I know them from Austin, Texas, where Juan owns “Juan in a Million” (formerly “Don Juan and Only’s”) Mexican food restaurant. Many people contact me to see if we can meet in Florence, but it rarely works out for some reason and I often hear back later that there was just no time or someone was ill . . . so this time I canceled my art history lecture plans.

Anyway, after some “wrapping things up” time for both of us, we met in Piazza della Signoria. I then walked them over the famous Ponte Vecchio on our way to a restaurant that I see every time I go to the art history lectures by Charles Cecil. My friend Simone had long ago told me that the prices were very reasonable, but I rarely get to eat out. 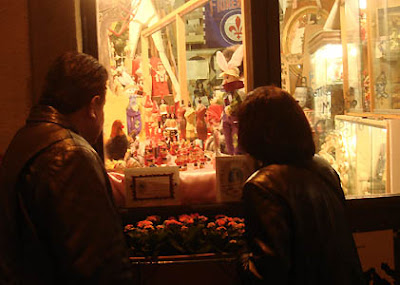 Anyway, this first image is of Juan and Myrna window shopping in a store that makes the wooden (of course) Pinocchio dolls. Pinocchio is a storybook character that I never associated with Florence until I got here. I do not remember the most obvious details, I suppose.

From the Ponte Vecchio, Borgo San Jacopo turns into Via Santo Spirito and poi, Borgo San Frediano. I guess it happens not only in America for cities to change a (relatively) straight steet’s name after crossing certain intersections. The ristorante, whose name escapes me, is apparently quite popular. Without reservations, we had to wait one hour. So, I took the Mezas through the Porta San Frediano, pointing out things I found interesting and telling them some of my favorite stories about Florence and Italy.

I love this porta (literally ‘door’). It may be the tallest porta surrounding Florence and certainly has a presence with its giant, studded wooden doors created at a time when the city was walled all around. Simone and I joked once that horses “way back then” must have been really large -- just look at the height and size of the tethering rings! (They are on the left wall above Juan and Myrna Meza, who are standing to the left of the door.)

Walking through the Porta San Frediano and to the left is Birreria Artigianale, where one can taste the best brewed-on-site beer in Florence. I really enjoy this place each time I have gone there because it is rare to see a tourist. The beer is not bad either, although I prefer to drink vodka. 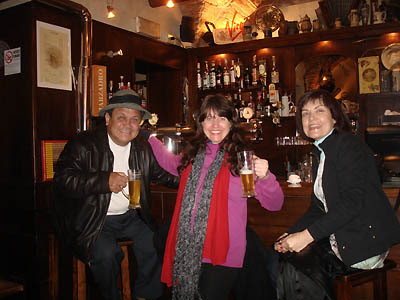 Allora, we arrived in perfect timing for our table at the Il Santo Bevitore, il ristorante. Our waitstaff were really kind and I was relieved a bit when they produced English menus. I do not cook or go out to dinner often, so I barely know special names for food in English, much less Italian. Juan and Myrna treated me to the entire evening, which was very generous and cool, although I was not sure what to do each time Juan introduced me as “Miss Kelly, the famous artist.” At each place we visited that night, Juan asked if they would post one of my exhibit flyers. 100% successful, he was! Myrna said that her shrimp tasted very fresh and the food in general was good. However, I think Juan was missing piccante (spicy) and he is probably now happily back in Texas eating his hot-enough-to-make-a-beginner-cry hot sauce!

And speaking of Texas, I just received notice that one of my photographs of Austin is being used by the Texas State Teachers Association (TSTA) to help them promote an event this summer in their Leadership Academy Promotion Brochure. The Leadership Academy is a yearly conference for TSTA local associations offering training for leaders.
Check it out: http://www.istockphoto.com/design_spotlight_details.php?ID=25352 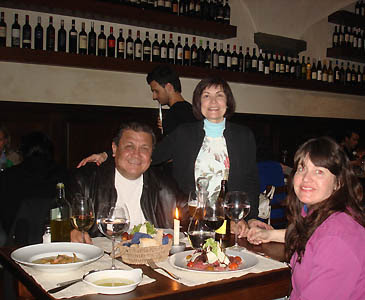 Posted by Kelly Borsheim Artist at 12:30 AM 2 comments: