Okay, despite the title of this post that I found amusing, no, I did not force feed any ballerinas!  I have returned to the Cava Nardini (Nardini Quarry, in English) to start to carve stone again.  Last fall I started to carve a piece of green marble with white veining that I bought in Pietrasanta, Italy, from a friend of a friend while I dropped off a new composition at a local bronze casting foundry. http://www.borsheimarts.com/sculpture/2016/RockTowersFrogGardenSculpture.htm

I wanted to learn how to stay at the abstract level, perfect for a stone with a busy pattern of contrasting tones.  I saw a ballerina throwing up a large piece of fabric above her and her flowing gown.  You may see images in one of my blog posts about this stone carving here:
http://artbyborsheim.blogspot.it/2016/10/autumn-in-quarry-vellano-tuscany.html

While the doctor told me that I should not try to carve stone until four months have passed after the removal of the cast on my broken right wrist, he also told me that after two months I would feel mostly back to normal.  I do not.  I do not have the flexibility back and when I try to push the hand to stretch it, there is pain still.  The cast was removed on 30 June.  My first thought was that if I am not “normal” after the two months, maybe it will be six months instead of four before I should attempt to carve stone.  The vibration too much, too soon, could ruin my wrist for the rest of my life.  I do not want to screw this up since my knee has still not healed.  I am nervous about why things are not getting better.

Still, I am not the sharpest tool in the shed, although I might be the one with the hardest head.  The symposium at the quarry is mostly over and the weather has cooled dramatically from this summer, to what I would call perfect carving weather [now that it has stopped raining].  I recently began returning to the quarry to start work again on my ballerina and the other black crystal marble piece I bought at the same time.  I justified that now that I have a car, I am not obligated to spend an entire day there if I need to call it a day sooner than the others.  I also brought more of my die grinders from Texas this past spring and decided that I could grind these chippy rocks, since a hammer and chisel will only destroy them anyway.  I have been using my left hand mostly, while trying to exercise my right a bit more than I was at home.

I had been watching a crack that was obvious in one section of the dress of the ballerina where a white vein met the green, but we all thought that it MIGHT be a small section since the crack seemed to fizzle out.  One seasoned carver asked me if I wanted to put some glue into the stone, but I am old school… if I know there is a crack in the rock, I need to remove the dead stone and redesign.  Glue seems to me to be just a Band-Aid. 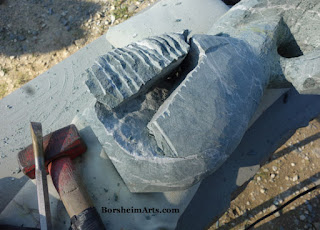 And then it happened:   the rock separated.  The section was where I imagined, but deeper.  And, once I pulled off the piece you see in this first image, you may see in the second image that there was now exposed the larger issue [see the crack where I put the red arrows].  The original bottom for the ballerina sculpture is the plane on the right [not visible].  Her billowing fabric is the curve on the left/top edge of the stone. 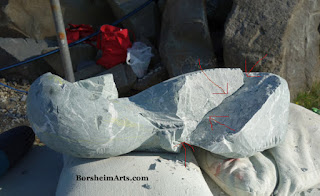 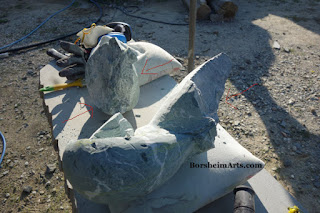 It was not difficult to remove the rest.  This was about one-third of the stone!  I was upset, even though I knew the fear was a probable reality.  But then, I justified that my intention was to learn something new and to push myself into abstraction a little bit more.  Ok, so the idea changed, but the exercise is still the same.  Imagine my delight when I looked fresh at the larger piece of rock and saw a whale!  In fact, the leftover tool marks from my diamond disc reminded me of teeth or at least the mouth of the sperm whale… hahah.   Do you see it here?  I am not so great with Photoshop, but tried to draw a thin red curve to follow the flow that made me feel the ocean.
The shape is not perfect for that, by any means.  Nor is there enough rock to create accurately the form of the whale, but that still was a bit of the point, no?  I turned the stone to other views and other positions.  I got a kick later at home when I saw the tree coming out of a fish-shaped form, as if it were a vase.  I was so busy looking at the marble that I did not compose my shot other than trying to find something dark behind the marble to show me the form. 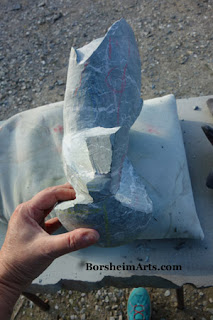 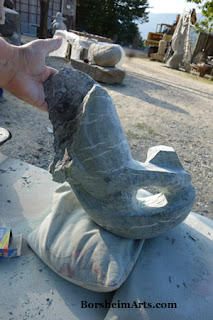 From the viewpoint in the image below, I actually saw a standing figure – with a triangular neck and head, short triangular arms, and carrying some sort of a pack on his back.  Do you see that also?  Or something else?  Or nothing promising?

In my lips series of stone carving, [see the Zebra Lips as an example here:  http://www.borsheimarts.com/sculpture/stone.htm
], I tried to create other shapes on the back side of the lips.  Not sure that the transitions were all that successful, but the morphing idea intrigues me still.  How to start?  Well, I remembered my friend and mentor Vasily’s voice, “Start with a line that shows your idea.  Make everything else support that line.”    And so, I leave you with my note-taking on the green marble to refine the curve of the whale form that I showed you earlier. Happy weekend!

In addition, I recently published my September art newsletter with the theme, “Wind, Water, and Wisteria” because alliteration is just fun.  You may read the whole thing online with lots more images here:  http://www.borsheimarts.com/news/201709_Artnews_WindWaterWisteria.htm

P.S. IF original art, while affordable, is STILL a bit out of your budget, or the piece you adored has sold?  Or do you like arty things in different formats, to surround yourself with art?  Looking for a gift?  See my store online for pillow, phone cases, shower curtains, towels, tote bags, and yes, even prints on metal, wood, canvas, and so much more:
https://fineartamerica.com/profiles/1-kelly-borsheim.html 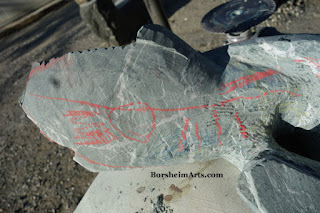 
Dear Art Lover,
Here are two of my recent charcoal drawings finished:  Spotlight and Splash.  They were inspired by a trip to the Cinque Terre in Italy… specifically, the coastal town of Vernazza.  Where the mountains meet the sea, drama often ensues.  And with what beauty!  I hope you enjoy these works.  They may sell individually, but I offer a savings if bought together or with any other of my artworks.  I will include free shipping so the math is easy.  See some process images and prices online:
http://www.borsheimarts.com/charcoal-drawing/2017/SpolightSplash-CinqueTerreSeascape.htm 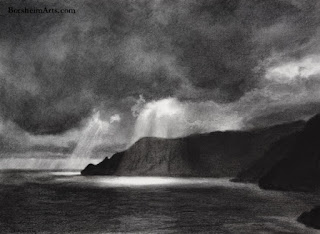 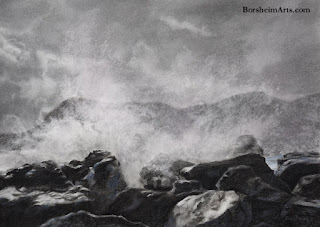 So, I recently published days ago my September art newsletter with the theme, “Wind, Water, and Wisteria” because alliteration is just fun.  You may read the whole thing online with lots more images here:  http://www.borsheimarts.com/news/201709_Artnews_WindWaterWisteria.htm

Now, off to continue this precision mural I stopped working on seems like a year ago . . . [it is in my own home, so … ]

P.S. IF original art, while affordable, is STILL a bit out of your budget, or the piece you adored has sold?  Or do you like arty things in different formats, to surround yourself with art?  Looking for a gift?  See my store online for pillow, phone cases, shower curtains, towels, tote bags, and yes, even prints on metal, wood, canvas, and so much more:
https://fineartamerica.com/profiles/1-kelly-borsheim.html

Posted by Kelly Borsheim Artist at 12:18 PM No comments: