Cari Amici (Dear Friends),
In my last post, I wrote about seeing the etchings of Francisco de Goya in the Museo de Bellas Artes de Bilbao, Spain.
A small part of the wonderful exhibition was a collection of paintings inspired by Goya’s etching style and ideas. Most of those works were beyond me. [I think that is my current polite way of saying that I either do not understand it or I just do not like something.] However, one small painting blew me away! It was an oil painting on copper titled “The Communion” by Spanish painter Eugenio Lucas Velázquez (1817–1870). It was painting in 1855 and the depiction of light is phenomenal!
This is a strong composition that relies heavily on the composition “Rule of Thirds.” This rule refers to the idea of dividing the image into thirds by using a grid system (think Tic Tac Toe, but with any rectangle). The four points where these vertical and horizontal dividing lines meet are the key points of interest for the eye. The strong light figure on the left side coincides along one of these lines. The strong dark figure in the lower right also lies on a point of interest, more or less. 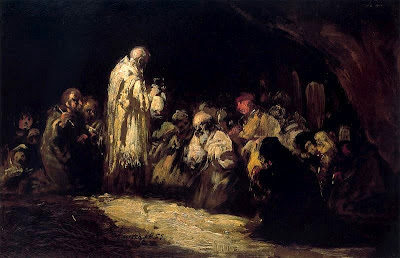 The overall horizontal design of this painting gives one a sense of calm. The dramatically lit standing figure gives the feeling of strength and stability (the basic emotional feelings for vertical lines). And yet, diagonals are where we get our sense of drama, or more important, movement. We are kept from being bored in Eugenio Lucas Velázquez’s painting because of the subtle diagonal of the crouching figures. Their heights vary and if one moves along the top of this gathering of sinners, one can imagine playing music or something. [I suppose this is one of those weird Synesthesia situations or perhaps only the memory of my musical training.] And if that were not enough, the artist has given us a strong diagonal of light underlying the figures and leading the viewer’s eye back into the standing priest in white.

The faces and figures are hardly detailed. The small painting has quite a lot of texture, even in some of the darker areas. It is a rich painting of a grande idea. It is simply (or not so simply) gorgeous.

Posted by Kelly Borsheim Artist at 7:59 AM No comments:

Cari Amici (Dear Friends),
This past week and for this next one, I am learning the art of mural painting from my friend and colleague Victor Goikoetxea in a workshop here in San Sebastian, Spain. I was lucky enough to be offered a day trip on Saturday to nearby Bilbao with my host family, one of Victor’s cousins. After arriving in Bilbao, I was dropped off in front of the famous Guggenheim Museum. That was fun, but even before I explored the grounds of the Guggenheim, I saw banners hanging from the street lamps advertising something even more enticing.
I could not believe my luck: there is an exhibition going on at the nearby Museo de Bellas Artes de Bilbao of Francisco de Goya’s etchings! I find myself intrigued with etchings and know that if I possibly can, I will learn more about this process enough to try my hand at it. Goya (1746-1828) changed the way that etchings were viewed. According to the writings on the walls of the museum, etchings were traditionally created as copies of paintings. They were intended to create a wider public awareness and appreciation for a painter’s work. Rarely before Goya had anyone used the printmaking process to create original compositions. And what wonders Goya created!
Even if you find Goya’s subject matter dark or too satirical or something (insert your own adjective here) for your taste, perhaps you can appreciate his dramatic imagination, as well as his ideas of composing in light and dark. Much of his work was a direct outcry at the excesses and abuses he saw in his own culture and for this, he was not without censure. He was a master at expressing himself. While the museum permitted absolutely no photographs, I include here some of Goya’s etchings and/or aquatints that I found on the Internet that show much of his skill in creating many different tones by “scratching” made into copper plates. I know artists who work in this medium and it is not a skill developed overnight!

Goya: “The Well-Known Folly” aka “If Two to One Stuff Your Arse With Straw” 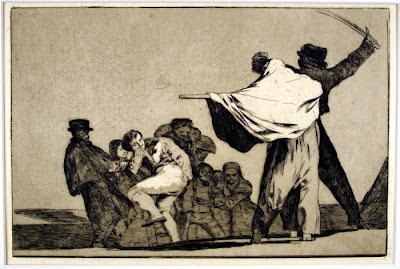 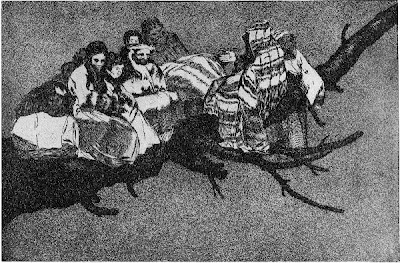 Goya: Lucientes – “The Sleep of Reason Produces Monsters” the caprices, 1799 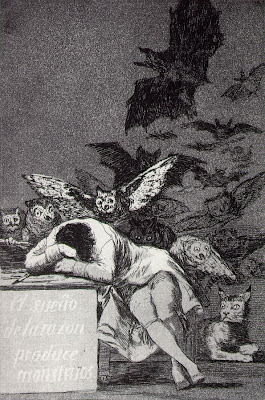 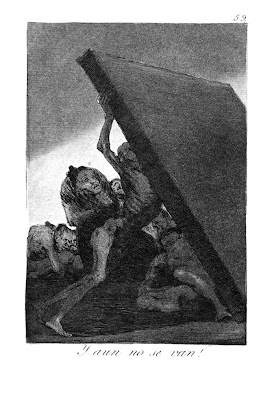 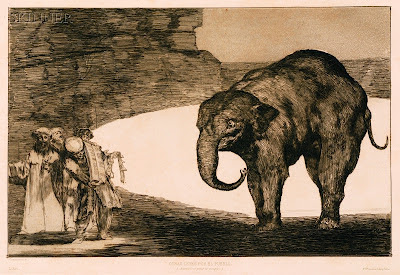 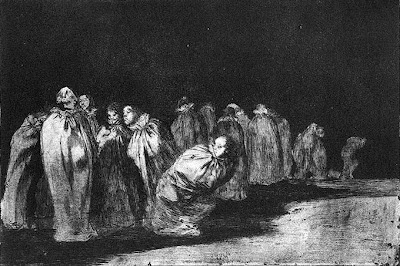 This exhibit of Francisco de Goya and other artists inspired by Goya ends on 23 September 2012.
Incidentally, two of the etchings that I saw had a figure in it that no doubt inspired the Frankenstein image we see in films. I was stunned at the resemblances!

Posted by Kelly Borsheim Artist at 1:46 AM No comments:

Above: Cover for book:
"My Life as a Street Painter in Florence, Italy"

Order the book today
from the artist.
(Click on image above.)