Construction of a Painting 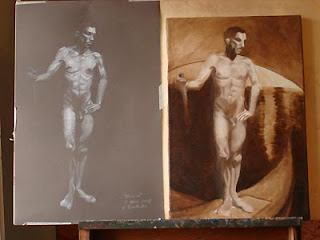 I started one of my “Naked Gondolier” series paintings this past Sunday. I am doing it in my spare time, whatever that actually means. Anyway, I used the drawing I did of “Mario” that I showed you recently in a previous blog entry as the step-off point. I like the idea of the light in a figure emerging from darkness.

However, I also wanted to imply the gondola, as well as a bridge. I mean, what else spells out Venice (Venezia) in bella Italia? I am not looking to create details, but I do want to elicit an emotional response to the romance of this city. So, I began my disegno, starting with line and a vague idea of three tonal values. I photographed my beginning and then, in Photoshop, started playing with various lighting effects.

Not happy with any one thing, I decided to just start painting. Sometimes these things have a way of speaking for themselves, you know. Yesterday, I asked the Maestro John Angel if he could give me some pointers. I felt lost because I liked the light under the bridge, but it might not work in this particular painting. I was not sure that I wanted the reflection of the bridge to alter the shape of the dark water on the left. And the list went on. I could see why artists do works in series – it becomes possible then to choose one element for each artwork and play with it. Too many notes being played at once only makes noise, not music.

Allora, I concluded my confession to the Maestro with a, “I think that I am trying to do too much with too little.” Tilting his head slightly and with a pensive hesitation, he responded, “You took the words right out of my mouth. But also, I think you are afraid to lose too much.”

Wow. He just summed up my life.

So, I will add the darks and get back to you.
Thanks for reading.
Posted by Kelly Borsheim Artist at 11:27 PM 4 comments:

Sara – A Drawing In Charcoal 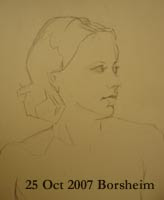 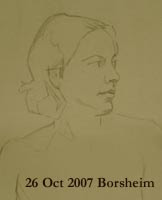 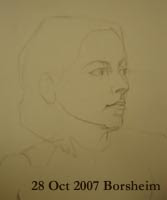 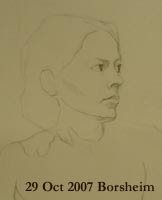 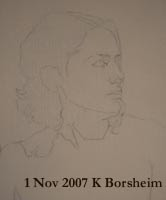 Today has been somewhat of a catch-up day. It has been very cold in Firenze. As such, I have begun to organize and archive some of my images. That includes my progress images of current projects, such as my carboncino drawing of a model named Sara.

Here I have posted five images of my drawing of Sara’s head at various stages. I am spending three hours per day with the model, starting on 22 October. And I am moving very slowly since I am trying to learn a lot and not just produce a drawing.

You can see that each day the head has changed. There is something that I like about each one, although (honestly) there is something that I prefer in the first disegno. The problem with her was that the head was too small for the body. Because I am pushing myself, I chose to completely erase the head and observe fresh rather than simply trying to make all of my drawn features larger.

The first four images are of my cartoon. The cartoon tends to be just regular drawing paper and is where the artist creates the design. The less expensive paper gives the artist the freedom to make mistakes and change one’s mind. Once satisfied, the cartoon image is transferred onto the quality, toothed paper that will accept the charcoal medium, as described a bit in a previous blog.

The last image is of charcoal on the Roma paper. I wanted my drawing to fill the paper, so I took my original drawing to a copy shop and had her enlarged a wee bit. Then I used tracing paper to transfer my disegno. This method allows my original to not be harmed, although in this case I did not transfer from my original drawing. Anyway, the charcoal is faint because while I am going over my lines and pushing the charcoal I have drawn on the underside of the tracing paper onto the Roma paper, I am trying not to emboss the Roma paper.
Posted by Kelly Borsheim Artist at 9:22 PM No comments: 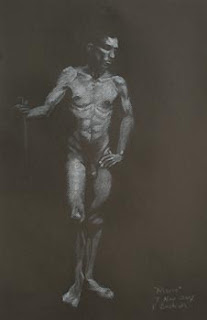 And another life drawing here. This time the model’s name is Mario. We seem to have an abundance of models here in Firenze. Lots of new faces and forms to draw. The figure is about 42 centimeters (just over 16 inches) tall. I drew in the light shapes only with a white pencil on a dark charcoal grey Canson paper. I have done some shape exercises to train the eye in which I only draw what is light, and not shadow. I had fun with it and when working with Mario, I decided to use a much darker paper so that the lights seem to emerge from darkness, adding perhaps some mystery.

The paper for framing purposes is around 47 x 30 cm, not counting what would be under the mat and frame. The drawing is signed and dated 7 November 2007. I did a few minor touch-ups after that, but that is the date that the model session was held and most of the work was done. I may get to use this sketch as an inspiration in my “Naked Gondolier” series of paintings.

“Mario” is available for private or public collexions, so please do not be shy about inquiring! Thank you for reading.
Posted by Kelly Borsheim Artist at 1:12 PM 1 comment: