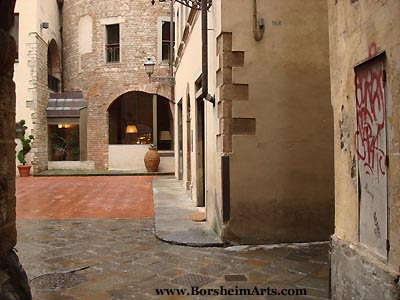 Cari Amici,
Oggi (Today) is Independence Day in Italia. But I am not feeling it. Nor will I get to see how the Italians celebrate. For weeks now I have had a tosse (cough), but in the last few days, I have “progressed.” Each morning I start the heater in the studio and prepare to create my latest charcoal drawing from a male model, but I cannot seem to make it through the three-hour session without needing to curl up on the couch. Now, the chills have set in and I am feeling a bit devastated because the weather has been incredibly lovely for the first time this week.

So, today, while I recoup, I leave you with these images that I took last week. I was wandering al centro in a wee bit of rain and returned to this alley that houses Florence’s only round tower. Or at least that is what I overheard a tour guide say while I contemplated my next image. She also said that this tower housed women prisoners (I forget the crimes they allegedly committed) and that the tower is sometimes referred to as the Straw Tower because the women slept on straw. 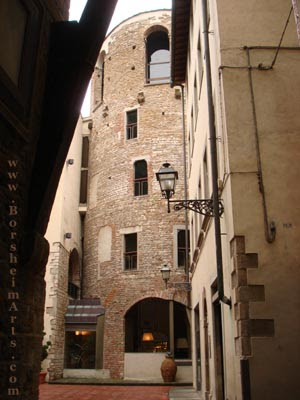 The Byzantine Tower of Pagliazza hails from the 6th century while the neighboring Medieval Church of San Michele in Palchetto is a 12th century addition. Today, you too, may have the experience of sleeping in Florence’s round tower, but since the building is now part of a 4-star hotel, you might be disappointed that you would not be sleeping on straw. (Mi dispiace.) Named after Florence’s most famous architect, The Hotel Brunelleschi houses 96 rooms, some overlooking his Duomo.

And adesso, I crawl back under the covers . . . 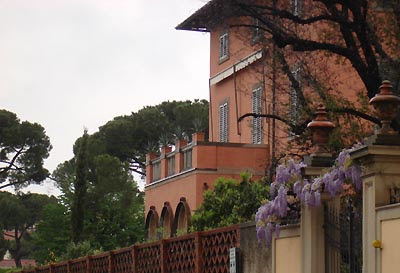 Cari Amici,
I live outside the city central now. While it makes my life more complicated, I do enjoy hearing the birds more while I am actually home and not in the studio. And I am learning more about this lovely city of Florence as I walk more around her.

La Primavera (spring) is here, but most days, you would not know it. It is raining more than last year, my friends say, and so, I am hoping the Arno River will get a bit cleaner and the plants a lot greener. 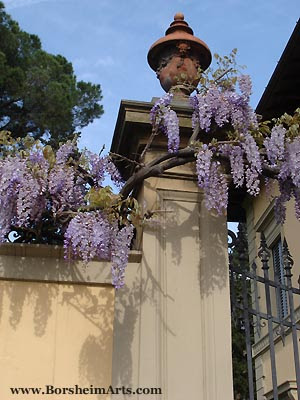 I include here some of the images I took along a street near my new home of wisteria, one of my favorite vines. These fragrant cascading flowers are beginning to blanket the sidewalks. In this way and in their purple color, they remind me of the jacaranda trees in Florida.

Look for an exhibit of my work in Florence, Italy, May 22-24. More information to follow.
Thank you for reading. 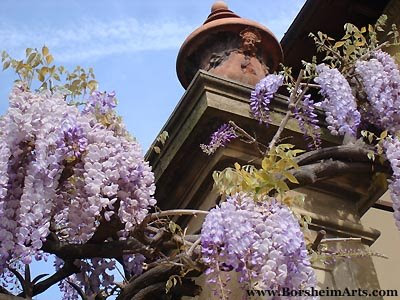