One of the most difficult things to do in stone carving is to have two objects touch without making one too long or too short. While I have plenty of carving left to do on the base of my “Gymnast” marble sculpture, it is time to address how the hips of the figure will rest upon the turtle shell that holds her up.

Also, I have been working on many different parts of the figure - from hair to toes to her chest and neck and her hands. It is time to refine the shape of her hips as I figure out the connection to what is below. Categorically, my work falls somewhere between reality and abstraction. So, while I will not be creating an exact replica of the soft flesh of even the strongly developed gluts of an athlete as it is pressed over a hard form, I do want a great line for many viewpoints. I want the eye to move along, and I want the viewer’s hand to pass over the marble figure and feel a soft sensuality in the cool stone. 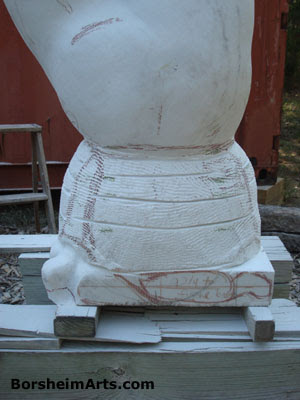 While I had planned last night to go into town for a late night concert of Indian music, I decided to stay home instead and photograph my crotch. That sounds like a lot more fun than it was. But after I got cleaned up and lost all of the day’s stone dust, I donned a pair of tights and tried to emulate the pose. This is part of the problem: I do not want this sculpture to look like me. However, when I am carving, it is actually my body that is the most available. I am happy that I have no neighbors nearby since I often tend to feel the shape of my own muscles and then draw what I felt onto the stone, adapting the anatomy to fit the work.

But my fingers are too thick to really “see” how the shape feels as the soft flesh folds over a bit of the hard tortoise shell. So, I needed either an interesting set of mirrors or some self-portraits. Hmmm. Scary. But this connection is very important. I asked John Borsheim, the mechanical engineer, to talk to me a bit about how much I could cut into the stone before it became so much like an hourglass that the sculpture would snap in two at that point if there is any stress while moving the stone carving. Better to err on the side of caution. This is also part of the reason for creating the turtles heads UP off of the bottom surface, while the legs will help create a circular base. More on that later . . . 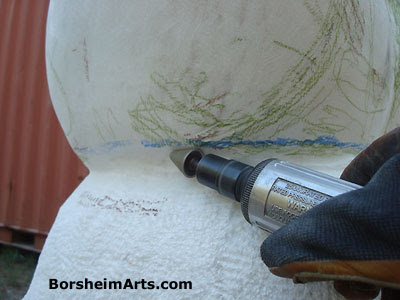 I have not been happy with the hips, feeling that they are a bit large and malformed for a figure that size. I began to feel that the hips were getting too much vertical length and thus went back to my original measurement and cut off much stone. Measuring has always been a challenge to me. I am not sure what these images may tell you, but the hips will start to pull in more to give the pike position that noticeable “V” shape. In the last image (taken at dusk, hence the bluish cast), I can clearly see that I still must cut off some of that thigh as it gets closer to the torso. Anyway, I marked it in the near dark and will continue to shape the stone. 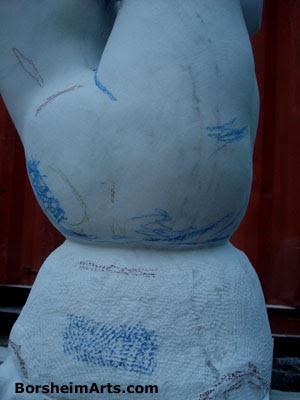 I am at the “dangerous” stage of my stone carving process with this marble sculpture. I say “dangerous” because I am almost to the point in which my mind can fully imagine the finished work. The problem is, the “Gymnast” is physically far from completed. At this stage, my mind becomes restless and my thoughts shift to thinking of the challenges I will have with the next stone. You can see the possible destructive nature of this situation, right?

The good news is that with all of my years of carving stone, I know full well that I will move beyond this step in due time and fall in love again with my current marble. I just hope there is enough time because she is the largest and most difficult carving I have yet attempted and I want to finish her desperately.

And the work by the stone carver progresses . . . 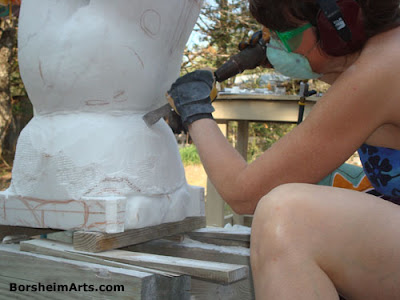 Posted by Kelly Borsheim Artist at 7:07 AM No comments: