Enough friends have asked me about the status of my sculpture “Pinocchio sul Columbo” [“Pinocchio rides on the Dove” that I stared on 4 July for the stone carving symposium at Cava Nardini in Vellano, Tuscany, Italy.  After two cracks in the stone called pietra serena [a grey sandstone] made me scrap my original idea, I overdesigned the next idea.  Normally, one finishes the work DURING the symposium, but I knew that this was a very laid back situation and that it is local for me.  In fact, all of the participating sculptors were fairly local.  Several of us stayed longer to finish our compositions.

I still have 2-4 days of work left to do to make a presentable piece.  However, tomorrow is Ferragosto, a national (Catholic) holiday in Italy.  I also still do not have a car and depend on Marco Nardini, quarry owner and really nice guy, to pick me up and take me home, so the schedule is at his convenience, as far as I am concerned.

Anyway, without further ado.  The first image is me standing next to the stone chosen and set up for me before the symposium started.  Because of my leg injury and my bronze fountain sculpture commission, I was not able to go to the quarry beforehand to select my stone, so I sent approximate dimensions for my original idea to Silvio Viola, a sculptor and the organizer of this event.  The symposium started on 4 July 2016.

It is really great working at a quarry.  If we needed tools or the stone moved or a hole drilled, it was far easier to do in on a regular work site than have to make special arrangements to have these things done in a timely manner.  This was the first time that I had assistance on my sculpture.  I would cut, or more accurately score, the stone where I wanted some removed.  Another artisan would come to chip away what I had scored.  I do not know if I did my knee more or less harm during this event, but hey, I am sculpting stone again!

This second image was taken on the last day of the symposium, July 14, 2016.  It is clearly not finished.  Many people still do not see the idea.  Or as Kumiko quipped, “It looks like a mosquito attacking a bird.”  Thankfully, the two of us have returned enough days that the form is coming together as much as possible, considering the cracks that stopped me from making a more romantic composition.  [Had I brought the wing tips together, the front view would have had more “ohh la la” as the wings formed a flame shape.  Boh!] 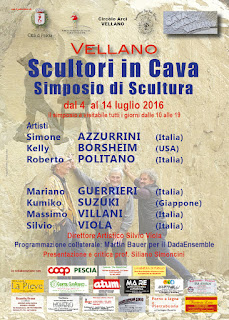 Posted by Kelly Borsheim Artist at 3:59 PM No comments: