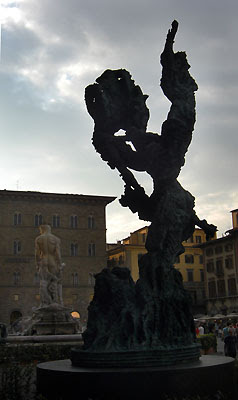 Something amazing has happened in Florence, Italy, and I am surprised at how few of my friends there, knowing that I am a sculptor, have commented to me about it. So, I asked several of them about it. Most seemed a bit reluctant to give me their impressions, although one of my Florentine friends told me that, “Sono due fiumi senza testa e contemporaneamente con molte teste, la cosa però è temporanea e se ne andrà presto” which translates to: “They are two rivers without a head, but simultaneously with many heads. But it is temporarily here and will go away soon.” I tried to get more information from him, but he was more interested in telling me about his latest girl troubles.

What others have pointed out, though, is that historic and rather traditional Florence has for the first time in about 500 years exhibited a monumental work of art in Piazza della Signoria - and it is the work created in our time AND by a non-Italian artist!

59-year old American sculptor Greg Wyatt has his contemporary bronze sculpture titled “Two Rivers” on exhibit near the Palazzo Vecchio, behind the “Biancone” (‘the big white one’, how many fiorentini refer to the stone statue of Neptune). 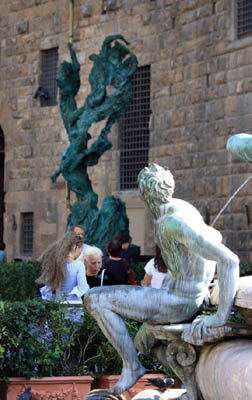 According to the story in Bloomberg.com, the city of Florence commissioned this work with a $350,000 grant and the usual political red tape. The artist, a native New Yorker, used Tuscany’s Arno River and New York’s Hudson River as inspiration to symbolize the creative energies shared by the people in these places.

Bloomberg stated that the bronze is 18-feet tall, while The Florentine said 16-feet. “Two Rivers” is a reported 22,000 pounds of a “crusty bronze,” which no doubt was a nod to the great sculptor Giambologna. I would have loved to have been in Florence to witness her installation as she was transported across the Arno and lifted into place with two cranes. And I was amused by architect Pierpaolo Rapana’s observation that if the foundation of Piazza della Signoria can handle Mussolini’s tanks without buckling, then this bronze sculpture should pose no problem.
---- 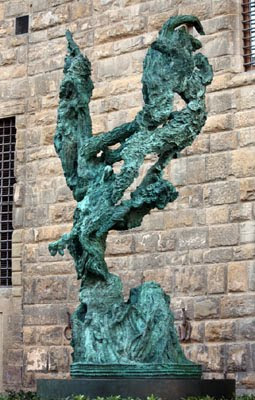 When Dayna Peterson Mason was planning her trip to Florence, she was given my name by a model that I know. Dayna is an Associate Professor of Art in Riverside, California, and I helped connect her with Italian models for her art pursuits in Florence. Since she is there now, I asked Dayna if she would do me a favor and take some images of Greg Wyatt’s bronze in the piazza for me to post here.

She mentioned how difficult it was to get good images with the diffused light outside that day. In general, Florence can be difficult to photograph because the sun does not see all or for very long. Still, these images can give you an idea of what the “Two Rivers” bronze looks like. For my taste, I like some of the parts better than the whole. But I leave you to decide for yourself. Thank you, Dayna, for sharing this with us!

According to the artist’s site, “The Two Rivers” exhibition will be at the Palazzo Vecchio's Sala d'Armi until November 24, 2009. 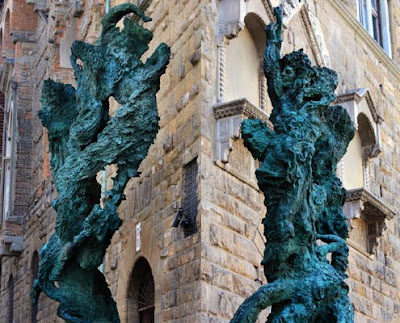 Like most things, the concept of yin yang is alive and well in Florence. Some of her locals have told me (not unlike my long-time friend Jamshid had told me about Iran) that there seems to be a constant struggle between maintaining the culture’s great heritage, yet wanting to move into the future.

Now, Florence makes another change, and again, not without some trepidation and controversy. The Florentine just announced that Piazza Duomo is going pedestrian! So, if you have visited the Renaissance City and been annoyed by buses, taxis, or even electric cars in the city’s center, your time has come.

I also understand that the beautiful, historical church of Orsan Michele is open on Mondays now. Free, too. This is great news since too many times that I have tried to go in, she was closed. I love this place, not far from where the madonnari do their street paintings. If you get the chance, go check out this remodelled mercato.

Thanks to Fabio for helping me with my Italian spelling (but no, he is not the friend with the girl troubles!)

If you find this blog interesting, please pass it on to a friend. Thank you! 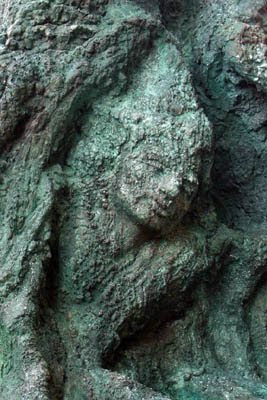 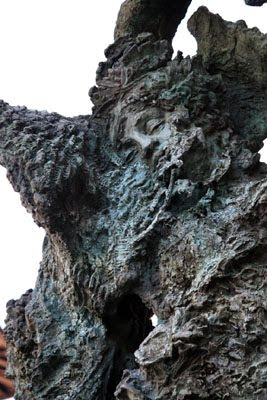 Ten days on the road. It was a whirlwind trip, fitting visits into short time frames with family and old friends that I had not seen in years. I also met many new friends. Here are some of the highlights since I last wrote:

1) This is an image of the oil painting I created for Amber and Alex Babcock’s wedding portrait. My sister Amber’s favorite artist is Alphonse Mucha, so I painted an 18” x 24” composition in a style similar to Mucha’s. They exhibited the portrait during their wedding reception this month. I hope that you enjoy it as much as they did. 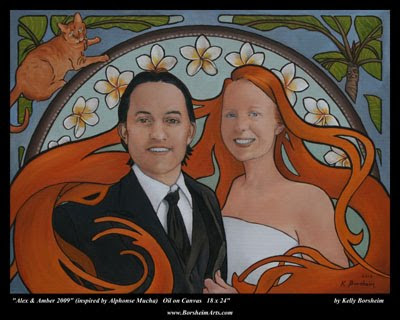 2) In the midst of the wedding festivities, I was elated to receive an e-mail that my pastel painting ”Il Mimo - Firenze, Italia” became a finalist an the online competition for paintings. See all of the FineArtViews Painting Competition Winners (September 2009)

3) After Florida, I went to North Carolina and was totally charmed by my new friends in Raleigh. The Carolina Mixed Media Art Guild and long-time Internet friend and artist Jeanne Rhea invited me to speak about my life as a madonnari (Italian street painter) and do they all know how to make an artist feel welcome! I toured the gallery at Artspace, enjoying a variety of styles and media, and even recognizing one artist, Linda Ruth Dickinson, whose paintings I had first seen from my visit to a gallery in Houston, Texas, a couple of years ago. Here is an image taken with the audience that remained after my talk for a bit of mingling and munching. After my presentation, Penny (the tall woman in the center) gave me a lovely gift bag full of exotic chocolates. How yummy is that? 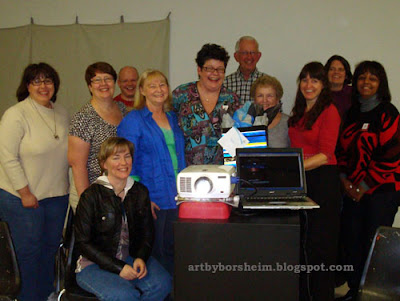 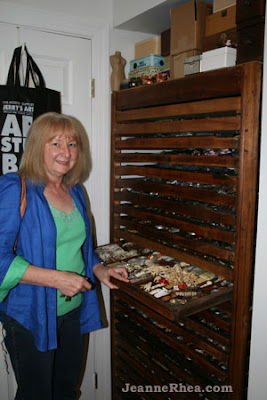 4) Jeanne and her husband Vince offered their home for the night, which was great. I want to share images of her studio with you. Seriously, this is THE most organized studio I have ever seen. No way that this was a “clean up for guests” kind of organized. I am still impressed. Jeanne said that she works with too many materials to NOT be organized. I must admit that I was a bit envious of her antique drawers. I have been hoping to find something like this for my Italian drawing papers. This would be much safer and cleaner than keeping the papers on the futon in my office!

Another image here depicts Jeanne while she showed me some test samples of her latest experiments with pigments. Visit her Web site or blog for updates - Jeanne is always exploring. The colors in her artworks are so much richer than anything you will see in photographs. Enjoy. Next time, I report on Florence, Italy . . . 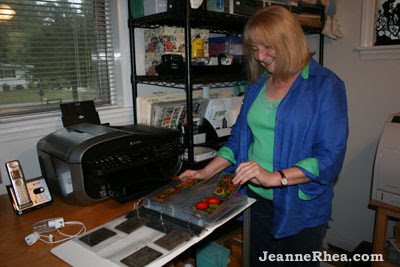 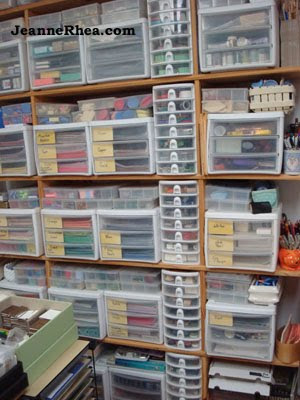 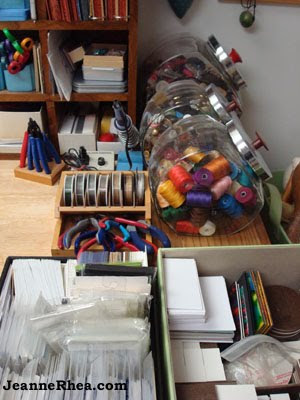 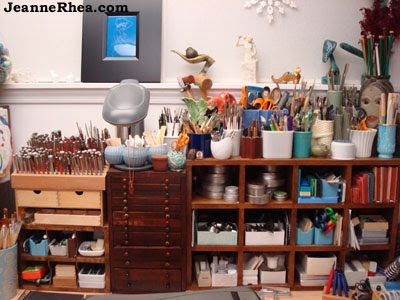 Posted by Kelly Borsheim Artist at 5:42 AM No comments: