Seashells and a Dragon

In my last post, I told you about Giambologna’s gentle giant sculpture in Pratolino, Italy. If you were to follow the path in front of the pond to the right, circling the brick and stone figure of Il Colosso dell'Appennino (“The Apennine Colossus”), you would discover … a dragon! 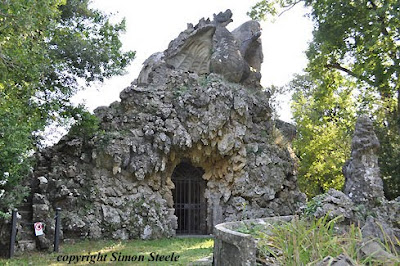 In the mid-1500s, Francesco I de' Medici, Grand Duke of Tuscany (25 March 1541 – 17 October 1587) hired architect Bernardo Buontalenti to create a holiday house of sorts for his amore, the Venetian Bianca Cappello. Buontalenti was also a stage and theatrical designer (and even has a flavor of gelato named after him!), which perhaps made him the perfect choice to design this fantasyland, blending technology with nature. It is said that he created “The Garden of Wonders” because of its “artificial grottoes, water tricks, and statues.” Most signs of this fun architecture are gone now.

However, behind the sculpture of the giant and under the dragon lies one of the artificial grottoes, inside of the gate you see in the image. The highly textured walls are decorated with sea shells and colored patterns, in a very different sort of mosaic. You may see the dark entryway of a tunnel or cave just south of the center of the second image 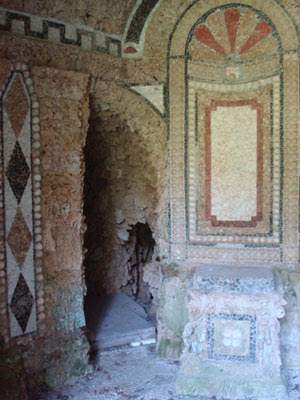 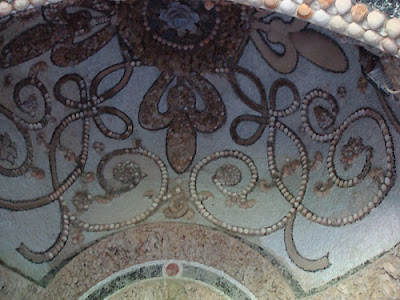 I was reminded of my visit to Hellbrunn Palace, just south of Salzburg, Austria. The backdrops for the Wasserspiele trick fountains had a similar textural effect. And of course, a mosaic of seashells makes sense when it come to fountains and water tricks.

I find this recollection interesting considering that Francesco is reported to have started this villa and gardens for his future wife Bianca Cappello, while he was still married to his first wife Johanna of Austria. Reportedly, Francesco’s father Cosimo I de' Medici decorated significant parts of Florence with a more Austrian taste to make Johanna feel more welcome. I wonder what Francesco’s thoughts were . . .

Johanna of Austria does not appear to have had a happy life in Tuscany and her untimely accidental death resulted in plenty of rumors, especially after the wedding of Francesco and Bianca. Oddly enough, Francesco and Bianca died on the same day and the villa was abandoned for some time. If you would like to read more about the circumstances of these deaths, just click on the names in this blog post.

Posted by Kelly Borsheim Artist at 12:31 AM