Before I left Italy, I wanted to go see the huge sculpture by Giambologna in the Parco Mediceo di Pratolino. This free and mostly green space is about 12 km from Florence, along the road to Bologna.

I would have taken some images of the beautiful scenery up in the hills on the way there, but I was a passenger on the back of an Aprilia racing bike and really wanted to hold on. [At one point, I felt an instant and dramatic pain that made me wonder if somehow I had gotten an electric shock from the moto. After disembarking from the bike, I was told, “Oh, that was the sting of a wasp as his ass went through his head: What you might call ‘roadkill’.” True enough: About five minutes into the park, I had forgotten about the small red raised bump the size of a dime on my forearm.] 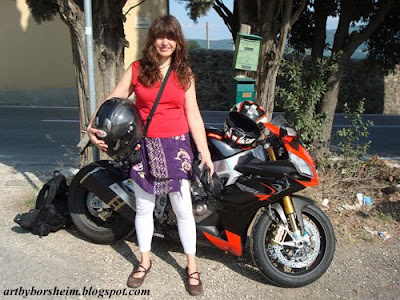 From 1568, the Park in Pratolino began as a private estate of the Medici family, Francesco I de' Medici, Grand Duke of Tuscany (25 March 1541 – 17 October 1587) is reported to have built the space designed by architect Bernardino Buontalenti for his then mistress-later second wife Bianca Cappello. Giambologna created his giant figure titled Il Colosso dell'Appennino (“The Apennine Colossus”) in 1579-1580. 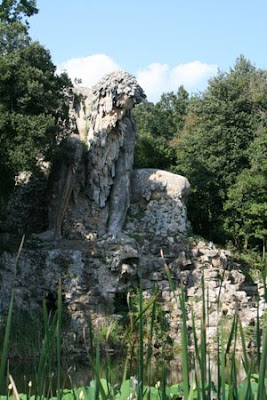 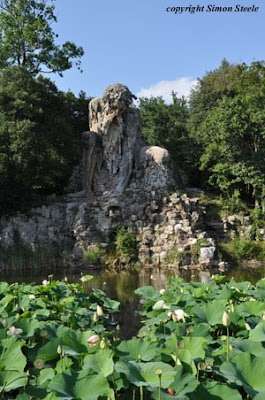 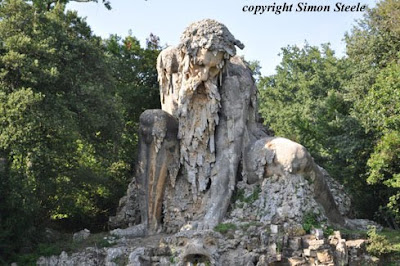 The figure is so cool, with the beard becoming a wonderful compositional device that also adds so much emotion to the sculpture. Signs say that the sculpture is made up of brick and stone, but I cannot quite figure that out. The bricks can be seen in a few places, where one can glimpse the underlying sculpture. The stone part, with its stalactite shapes and textures, strikes me as more like cement. In Roma six years ago, I heard a tour guide say that cement was actually invented by the Romans – and centuries before I ever thought it existed. Tour guides are not always accurate, but the thought does give me pause…

There is an artificial grotto underneath him (more about that in the next post) and in front is a large fish-stocked pond. This pond has the largest lilies and pads that I have ever seen: appropriately beautiful. 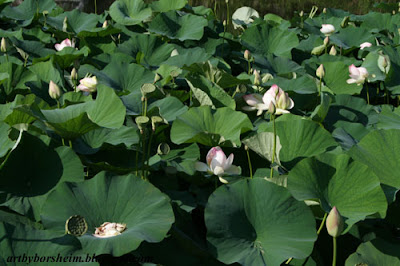 I love this view of the giant through the woods. Imagine approaching such a thing for the first time, not knowing it was there. You might wonder if that was truly a face that you could see in-between patches of green. This sculpture is truly fascinating. 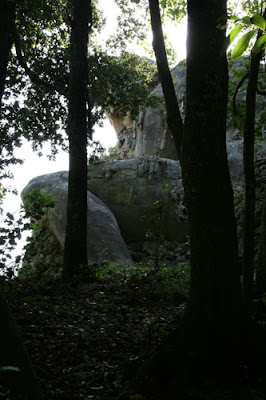 I include here a few images by sculptor Simon Steele, including this last one, taken from a distance. It is a good composition, but also shows you how large this sculpture is in comparison to the land. And the centuries-old trees here are simply gorgeous!

The park is generally open from May through September and is free.

Giambologna’s most famous sculptures include the bronze “Fountain of Neptune” in Bologna, the first commission that made his famous; the marble “The Abduction of the Sabines” (incorrectly translated as “The Rape of the Sabines” and also given its title by someone else after his composition was completed); and the bronze Mercurio in the Bargello Museum in Florence, Italy.

Other links of interest:
Scientific Itineraries in Tuscany 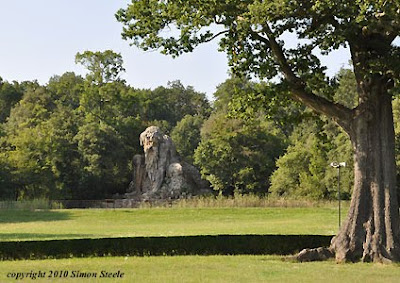 Posted by Kelly Borsheim Artist at 6:56 AM

oh he is beautiful! Thanks for this post, I never would have heard about him otherwise.

This is amazing! I didn't know such a sculpture existed. Would love to see it myself! Great that you made that trip, Kelly. :)

Thank you very much, ladies! I do hope that someday you can get out to Firenze and her surrounding areas.

The Romans invented Concrete. Cement of various types has been used well into the past, from buffalo poo to plaster. What was special about the Roman innovation was the strength they achieved from cooked lime, hydrated with heat that was able to bind with aggregate and ashes. Possibly the finest ever early example is the Pantheon of Marcus Antoinius whose domed ceiling/roof is stronger now than it was in the first century AD.
None, of this is relevant to Giambologna's Collosus, though.

Thank you Random Guy and Hog Rider for adding extra comments on cement and concrete. I love the Pantheon... my favorite place in Roma. Good to know that it is stronger now than before!