In my final post in this series about the Parco Mediceo di Pratolino, I wanted to talk more about the grounds. My absolute favorite part was how large and old so many of the trees are. I must admit that I had a hard time NOT climbing them. However, it is forbidden there and since this park is under renovation, I certainly want to respect the rules (this time!). The brochure states that there are over 900 trees that need to be monitored in the monumental areas.

After the sudden deaths of Francesco I de' Medici, Grand Duke of Tuscany (25 March 1541 – 17 October 1587) and his second wife Bianca Cappello, their villa and grounds were abandoned. Many sculptures were moved to the Boboli Gardens in Florence, Italy.

Today, there are information signs showing sketches of the former villa, of which I include images here. 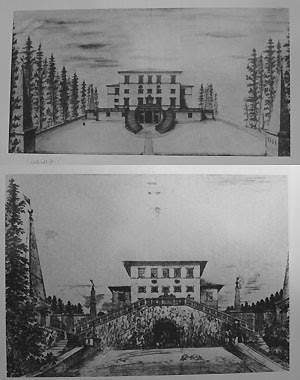 Granduke Ferdinand III of Lorraine brought the park to life, but turned it into a romantic garden in a style that was popular at the time. In 1872, the Russian Prince Paolo II Demidoff bought the estate. One of the structures still standing is called The Villa Demidoff and I include here an image of a sculptural decoration high up on the front corner of the building, perhaps a coat of arms. 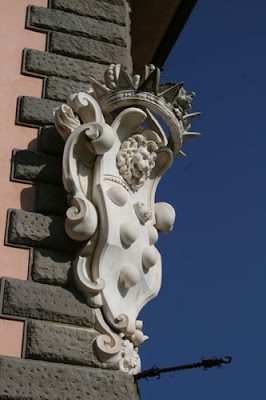 Walking across the vast green lawn, I was delighted to recognize a sculpture by Lorenzo Bartolini – and correctly so! Meaning that I am happy that I am starting to become familiar with more of the Italian sculptors to the point of being able to recognize their work before being told whom the artist was. Pictured here is “The Demidoff Monument.” You may see a lot of his plaster originals used to create his naturalistic marbles in the Accademia in Florence (where Michelangelo’s “David” lives). 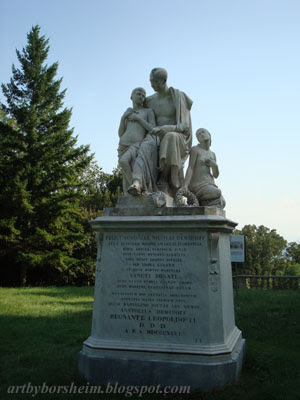 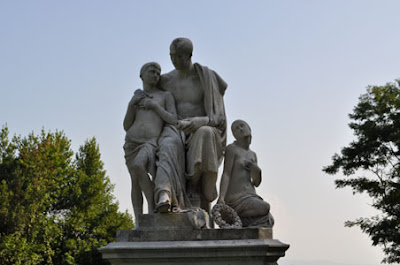 Not far from this spot there is a symmetrical split staircase. At each turning point, there appears to be a tunnel underneath, but everything is locked up, so one can only imagine. Still, there is the same grotto-like mixture of (some painted) stone and brick, like what you see behind Giambologna’s Giant not far away. 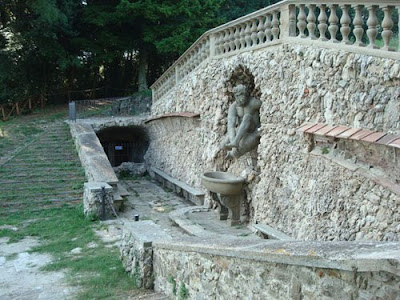 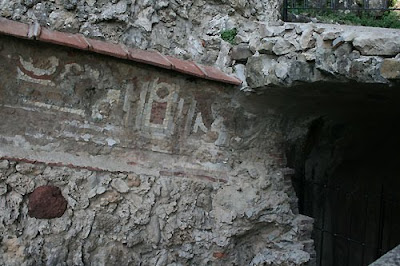 This last image is a detail shot of what is left of the stairs. I just love this Italian combination of stone and brick! And I am not sure, but those might be caper plants. I have been told by a couple of knowledgeable friends that capers only grow in walls. 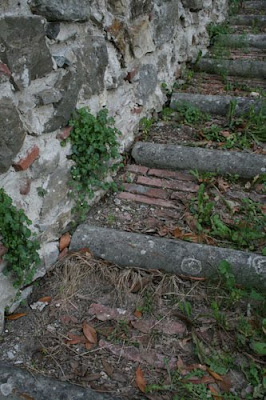 Since 1981, the grounds have been the property of the Provincia di Firenze, with the intent of using them as a public space. There is still so much work to be done and much of the land is closed. However, it is a lovely space and there are gems to see right now. The Parco Mediceo di Pratolino is open mainly from May to September. Free.

Posted by Kelly Borsheim Artist at 6:55 AM

Guess if I paid more to what you say, I could be able to recognize the sculptors, too. Thanks for sharing your information. I have seen places I will never get to. Hugs.

Thanks Kelly.
You bring sunshine and Art each week.
Gene P.