Many sculptors today and throughout history have created marble sculptures by first creating their compositions in another material, such as clay, in which the artist may add or remove material to get the composition exactly as intended. While the initial idea may be created in a small size, an enlargement would later be made, also in clay, or perhaps then cast into plaster. Then, using a system of measuring specific points, a copy in marble at the same size would be cut.

In the art newsletter I wrote after my visit to The Musée Rodin in Paris, you may see the black dots on a mixed media sculpture by Auguste Rodin. These dots mark the high spots on a sculpture so that one may create a copy of the art in another material, usually marble. Lower points between those marked can be carved and shaped after most of the stone has been removed.

However, I have not learned this technique. I am a direct carver. That means that I draw directly on a piece of stone and then cut away what is not part of my drawing. My friend Vasily Fedorouk told me many times that the original definition of “to sculpt” is “to remove material.” In his mind, and perhaps traditionally, wood and stone carving were the only methods of creating 3-dimensional art that could truly be called “sculpture.”

Stone carving, for me, is certainly the most challenging and intellectually stimulating of all the arts, and while I enjoy creating in many mediums, stone is my drug of choice.
In the following images, you may see some of the work I did on “George” in August of 2008. 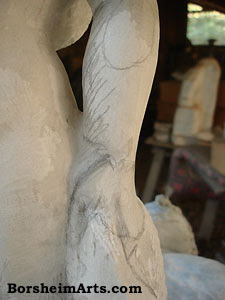 You may see some of the notes I make on the stone and some of my chisel marks. The second image is an example of how I like to look at my work from many different views, including ones least likely to be seen once the finished sculpture is on exhibit. Those views, such as the bird’s eye view from the top down, tend to give me more information (and a fresh eye) and aid in my choices.

Shortly after these images were taken, I left for Florence, Italy. I did not return to Texas and George until about nine months later. Thankfully, stone is more patient than I am. 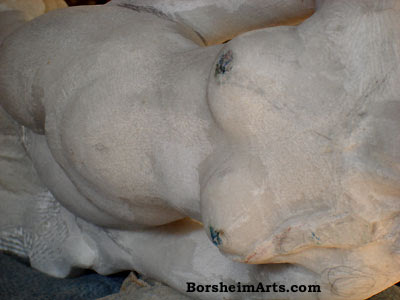 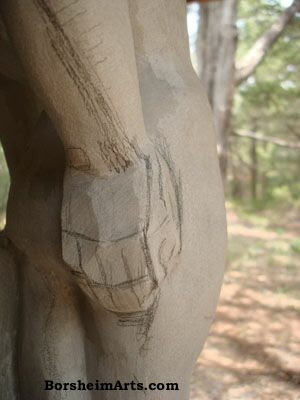 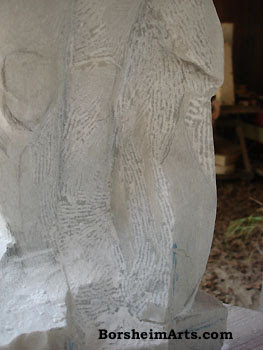 Posted by Kelly Borsheim Artist at 6:21 AM

Very interesting. Thanks for sharing your techniques and ideas.

This is a cool behind-the-scenes look at the artistic process. I would think direct carving is most unforgiving art form, so each step must be very deliberate. (Ink could be unforgiving too, but the stakes just aren't that high.)

It is also an interesting point about sculpture being a subtractive process. So, if a piece made of clay is not sculpture, what should it be called?

Thank you, Jo and Andrew.

Vasily never said what the additive process was called, but I think with clay, one would simply say 'modeling.' Perhaps other techniques would be 'assemblages.' Not sure really . . .

The original pieces I create with steel I freely admit are fabrications and I have the option of replacing metal if I remove too much. However I don't recall ever exercising that option. I am certain the direct method will be all I ever use for stone. Examples of the other technique seem to lose something in passion in exchange for the precision. Just my humble opinion.

Thanks for sharing! Very interesting to see some of the process.