Hello again. I have been carving the basic shape for the base of my stone carving “Gymnast” a little bit each day and at some point, it was time to get into a bit of detail. So, out with the crayons and get to drawing.

Before that, I would like to explain that I was inspired to create a kind of turtle to hold up the female figure by a visit to the Pitti Palace in Florence, Italy several years ago. That mountainous country has known many different cultures over the centuries and one can still see signs of some of them. The Pitti features a large Egyptian obelisk in the main garden. Each corner is supported by a bronze turtle. What a load those four turtles carry!

Of course, I designed my sculpture a little differently. Instead of four turtles, I will create a four-headed tortoise of sorts. So, in these first two images, I drew the shapes in the shell. Only the next morning, I realized my mistake and redrew the shapes at the bottom of the shell, making them line up in a way more consistent with the real animal. I think the lines were better then -- not so obviously mathematical in the way they lead the eye. 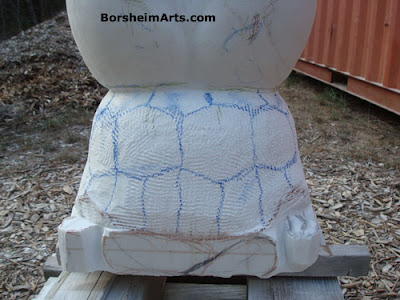 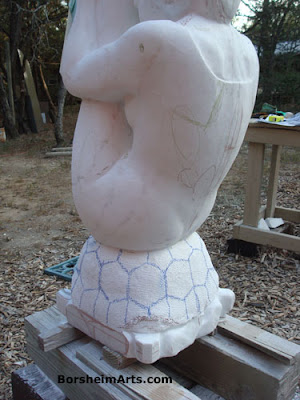 I was afraid that I would find this task tedious, having to repeat so many similar shapes. However, once I got into it, I found myself almost laughing out loud because I was enjoying the process so much. The exposed marble crystals were a delight. I rarely get to carve a lot of texture in my compositions and I may have to rethink that for future stone carving designs.

Oh, and it did occur to me that I should have used a more turtle-shell colored crayon! Hopefully, all of the blue wax will be chiseled off, but one never knows.

Stay cool and thank you for reading!
Kelly Borsheim 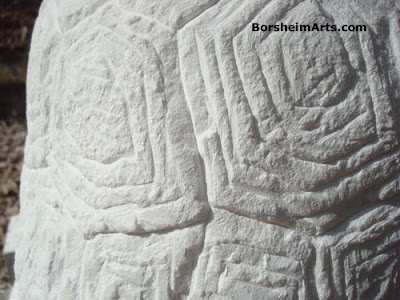 Posted by Kelly Borsheim Artist at 5:25 AM