Dear Art Lover,
I wanted to take a closer look at some of the paintings in The Wallace Collection in London, which I wrote about in the last blog post.  I did not have much time in this place, but that just means that the works that stood out merit a closer look, no? 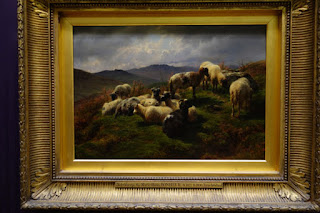 This first painting Sheep by Marie-Rosa Bonheur (1822-1899) was my favorite of the bunch that I saw.  I am not sure if it is because I have been spending so much time with farmers in Italy, Croatia, and Serbia, or something else, but like hay bales, I find sheep somehow comforting to see.  However, this particular painting is luscious.  It has an interesting arrangement of light and dark shapes, each animal doing his own thing, while obviously still part of his social club.  I love the way the light in the foreground contrasts with the dark clouds, the bright green landscape contrasting with the distant mountains.  The texture was brilliantly rendered.  The only thing that I did not like about this painting is that the lighting creates a shadow from the frame over the top section of the painting.  For a smaller painting, this seems a tremendous loss and unnecessary distraction. 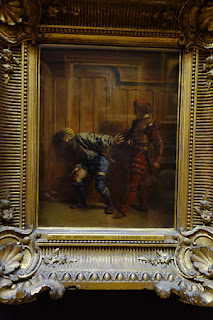 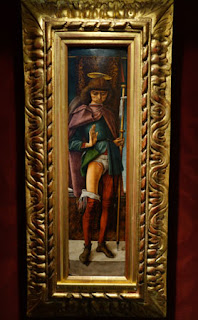 This long narrow vertical painting made me laugh.  It is of a man who has pulled down one of his thigh-high stockings to reveal a cut on his upper and inner thigh… showing us his “fundies” in the process.  It turns out that I am a bit immature. [Who knew?]  The cut is supposed to be a sore from the “plague,” which back in the 1300s was a term used generally to describe any number of serious ailments that spread quickly.  Saint Roch [San Rocco in Italian] was a Frenchman who died in Italy after having ministered to many people with the plague.  He contracted it himself and was exiled, and later imprisoned.  I am surprised that I had never heard of Saint Roch, the subject (and title) of this painting by Carlo Crivelli (1430/35-1495), two years before the artist’s death.  Roch is apparently the patron saint of dogs and people falsely accused.  “Plague saints” became popular as people chose to take control of their lives instead of simply accepting the spread of disease.  San Rocco has many churches in his name throughout Italia (and Europe) and I had better start paying attention!
For more information on this saint and the plague in art, visit:  https://en.wikipedia.org/wiki/Saint_Roch

The painting above right is titled, The Hired Assassins and was painted by J.L.E. Meissonier (1815-1891).  I love the quiet urgency in the body language and how the viewer knows that “something mischievous is about to happen.” 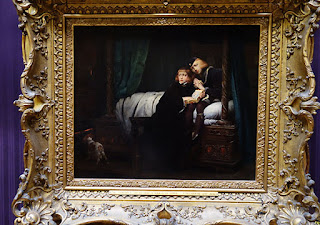 Edward V and the Duke of York in the Tower by P. Delaroche (1797-1856) is a good composition.  And I like the emotions shown by the different glances of the boys while the dog’s attention appears to be on an impending intrusion.  I hope that you are not only noticing the elaborate frames on these paintings, but also the colors of the walls upon which they hang.  I have noticed over the years how much I truly enjoy muted rich colorful walls as backdrops for art.  In these large rooms, at least, the color brings a coziness and intimacy to viewing the art.

Pure fun, this vase of marble! 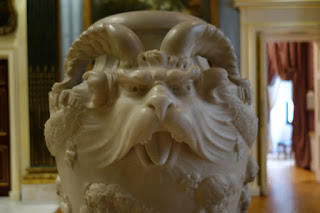 I started this blog post with an animal painting with contrasting light in the sky and thought I would end it the same way…. But make no mistake:  These are not sheep!  Hahahah.  This painting by C. Troyon (1810-1865) has the very clever and catchy title, Cattle in Stormy Weather. 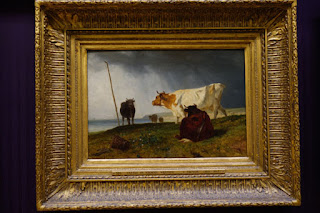 I am not above taking a donation or five if you enjoy what you read about and see in my images here on this blog. Your support and sharing really helps.  Thank you.  [You may make a donation via the PayPal links on the side bar on the blog site:  http://artbyborsheim.blogspot.com ]